(Minghui.org) Today's news from China includes incidents of persecution that took place in 10 cities or counties in 8 provinces. According to this report, 7 Falun Gong practitioners were subjected to mistreatment during their detention, at least 7 were illegally arrested, the whereabouts of 1 is unknown, and 1 is being persecuted for suing Jiang Zemin. 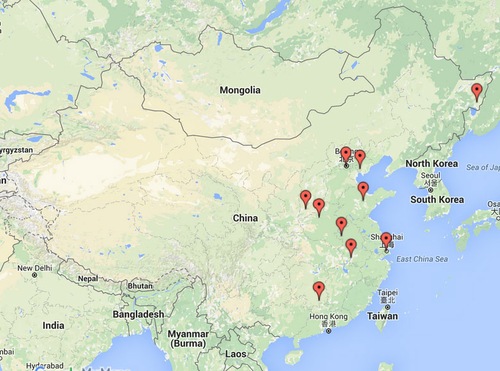 Ms. Ma Huijuan was arrested for distributing Falun Gong informational materials on October 3, 2015. She is held in the Gongyi City Detention Center.

Ms. Mou Yufang has been harassed many times by officers from the local police station for filing a lawsuit against Jiang Zemin. Her home was ransacked.

Ms. Zou Lanbing was arrested at the end of September 2015.

Ms. Li Meiling was arrested by officers from the Houma City Domestic Security Division on September 25, 2015. She was placed under criminal detention on September 26 and taken to the Linfen City Detention Center.

It is not known where Ms. Li's husband, Mr. Li Yunlin, is at this time.

Ms. Yue Guixia from Datiezhuang Village, Mafang Town in the Pinggu District, was arrested by Mafang Police Station officers for distributing Falun Gong informational materials on September 18, 2015. She is now in the Pinggu Detention Center.

Ms. Wang Jing lives with her daughter in the Senlinwan Apartment Building on Yushan Road in the Pudong New Area. She was arrested on September 6, 2015, for distributing Falun Gong informational materials. She is in the Zhangjiang Detention Center.

Police officers in four vehicles arrested Ms. Li Zhanxian on the morning of October 2, 2015, for telling people about Falun Gong and distributing software packages that circumvent internet censorship. Someone who claimed to be an officer had reported her.

Ms. Xu Xiuyan was arrested by officers from the Lubei Police Department on March 13, 2013. She was sentenced to three years in prison by the Lubei Court on September 19, 2015.

Ms. Xu was arrested at home on June 9, 2012. Her home was ransacked. She was sentenced to two years of forced labor. She was not admitted to the Shijiazhuang Forced Labor Camp for health reasons.

Ms. Zhou Xiuqiong from Bawuliu Farm was arrested by Bawuliu Farm Police Department officers and Liu Jianjun with the Comprehensive Management Office on October 1, 2015. They ransacked her home and confiscated a notebook computer, a printer, and Falun Gong books. She was turned over to officers from the Domestic Security Division that afternoon.

Ms. Liu Yuai was reported to the police by her husband. In the early morning of September 30, 2015, her husband took police officers to her mother's home, where the officers arrested her. The officers ransacked her home. She is being held in the Linqu Detention Center.

“Pharmacist Detained and Tortured for Filing Complaint Against Jiang Zemin”