(Minghui.org) Thousands of Falun Gong practitioners from around the world came together for a grand march in Los Angeles, California on October 15. It was one of the major events held in conjunction with the annual US West International Falun Dafa Experience Sharing Conference.

Led by the Divine Land Marching Band, the march set off from the Los Angeles City Hall and ended at downtown's Pershing Square. Multiple sections of the march procession told the story of Falun Gong, from the emergence and worldwide spread of the ancient practice to the brutal persecution and efforts to end the atrocities in China.

One the newest additions to the march themes highlighted the recent movement to bring Jiang Zemin to justice, as over 180,000 Falun Gong practitioners have filed lawsuits against the former dictator for launching the persecution. 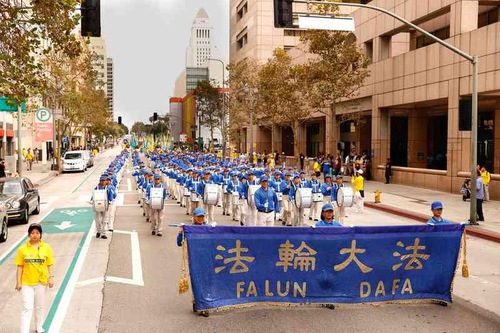 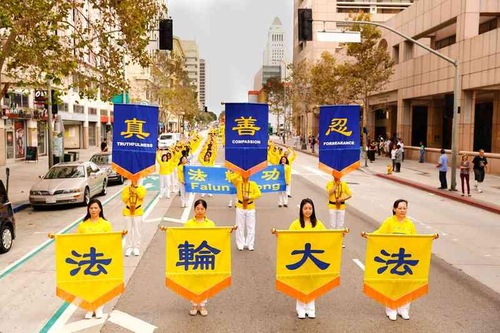 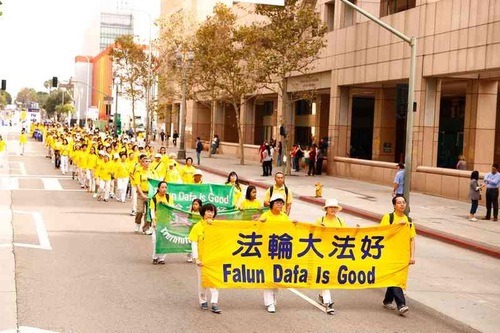 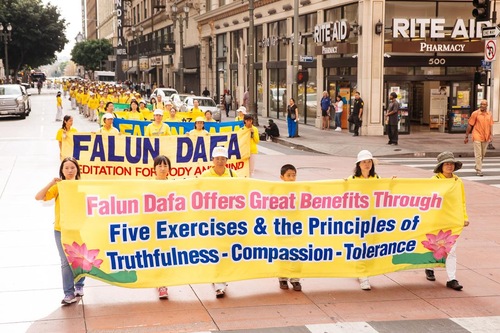 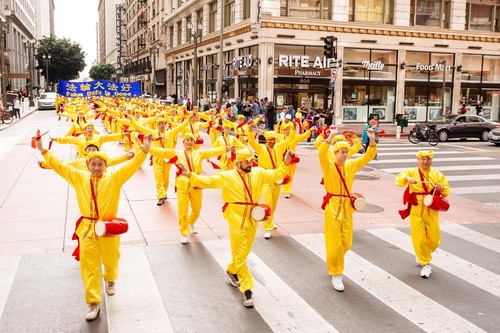 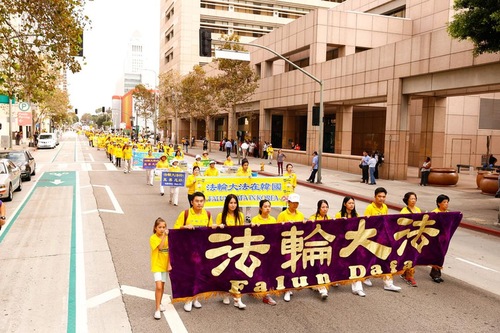 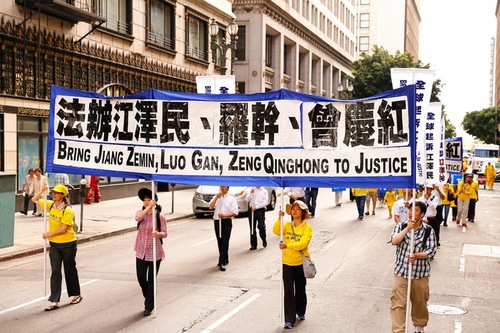 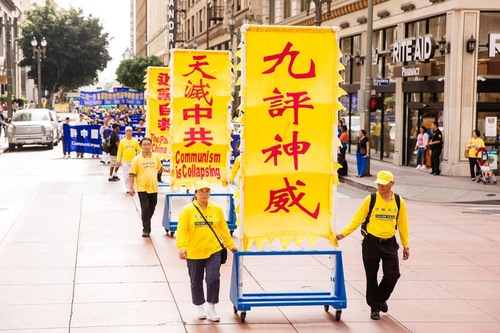 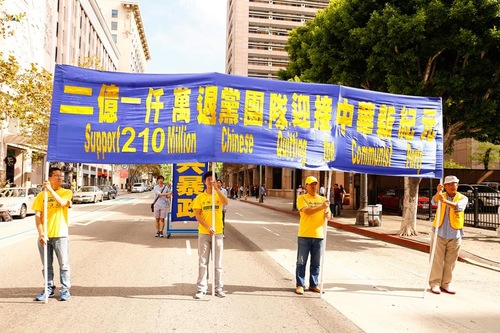 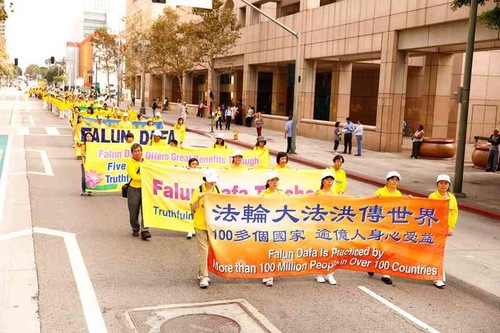 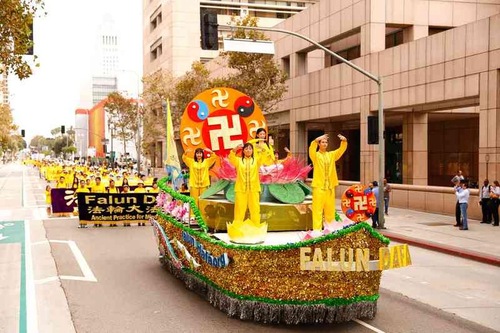 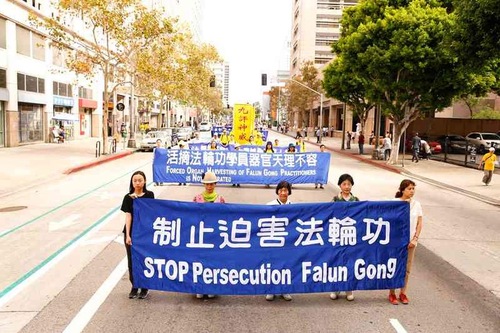 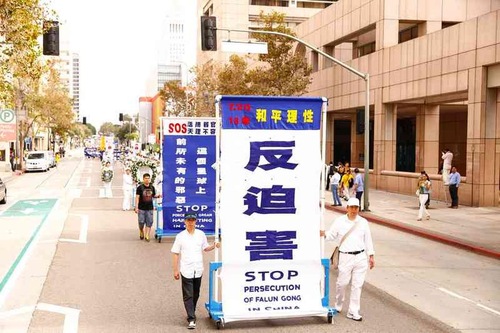 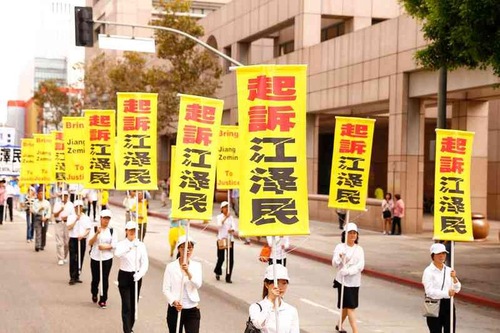 Large-scale march on October 15 in Los Angeles demonstrates the peacefulness of Falun Gong and exposes the brutal persecution. 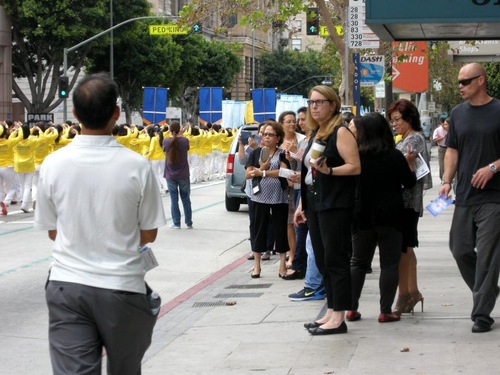 Held on a work day, many office workers in downtown Los Angeles watched the march.

Liz Huston, an actress, came down to the street from her studio when she heard the music of the band. She followed the march to the end. 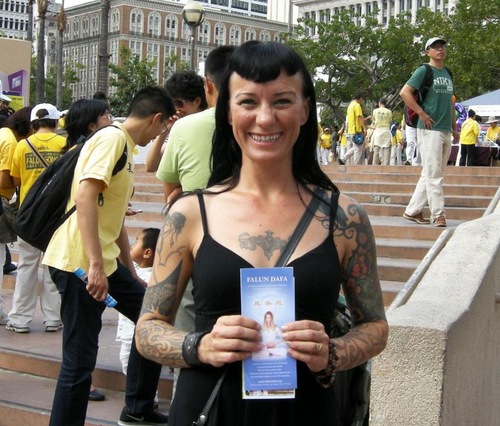 “It's amazing,” Ms. Huston said about the march. She said that she was deeply moved by it. “I can feel that everybody in the march has a compassionate heart. It is like a gift, and I am really grateful,” she said.

When she learned that Falun Gong is being persecuted in China, she was horrified. She signed the petition to condemn the persecution. “Everybody should have freedom, and the persecution should stop,” she said. 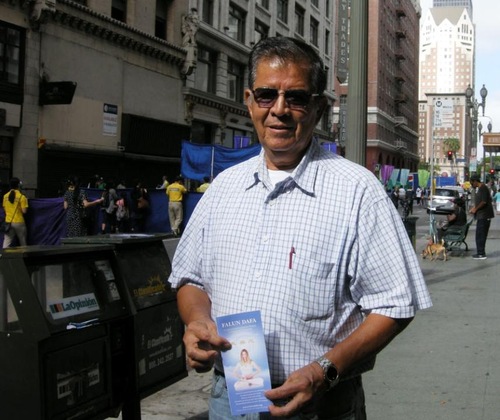 Arduro supports Falun Gong and hopes to see the collapse of the Communist Party soon.

Arduro, a local car dealer, said, “I like this march, and I know well about the persecution of Falun Gong in China. There are only a few communist powers in the world, China, North Korea, and Cuba. The Communist Party must fall soon because everybody in the world detests it.” 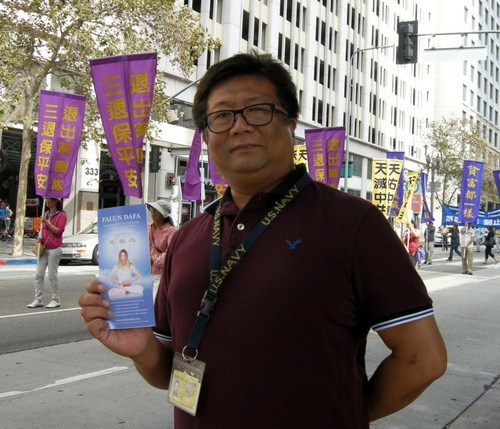 Raul said he plans to learn more about how to help stop the persecution of Falun Gong.

Raul, an IT worker at a local insurance company, was shocked by the brutality of the persecution. He said, “It is unbelievable that such a peaceful group is being persecuted only because they follow Truthfulness-Compassion-Forbearance. It is unacceptable. I will find out how I can help stop the persecution.” 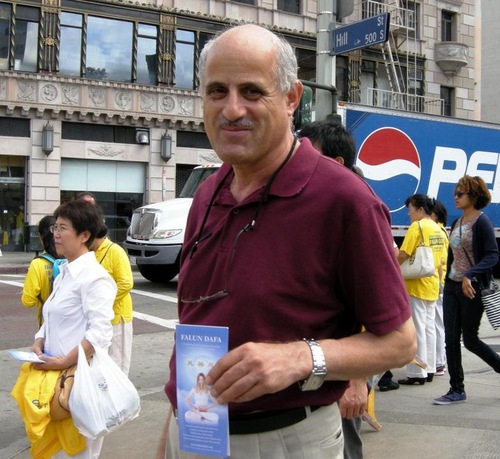 Mike, originally from Iran, is familiar with oppressive regimes and was glad to see the Falun Gong group standing up against the persecution in China.

Mike, a local office worker, said: “This is a great march, and it is a great way to tell more people about the persecution in China. I am from Iran, and I know how horrible a tyrannical government is. This march exposes the brutality of the communist regime to the world.” 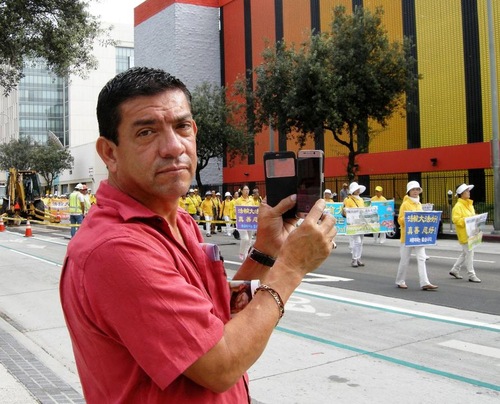 Tustabo, a tourist from South Africa, videotaped the whole march. He said, “I never heard about Falun Gong, and I am interested in learning more about it. I will put the film of the march on internet, so that more people will know about it.” 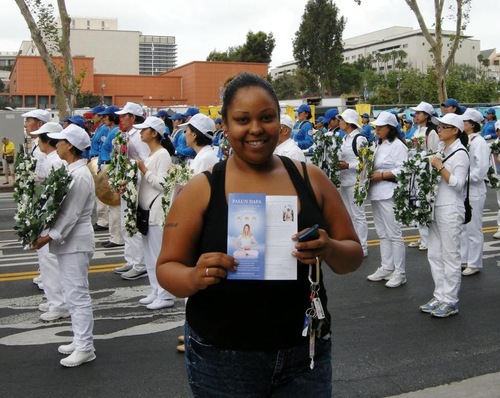 Elline said she would like to join the Falun Gong march to support freedom.

“If I didn't have to work today, I would join the march,” said Elline, an airline employee who watched the march for a while. “This world needs love and peace, and we need to help each other. Many people don't understand this, so killing and persecution are still happening,” she said. 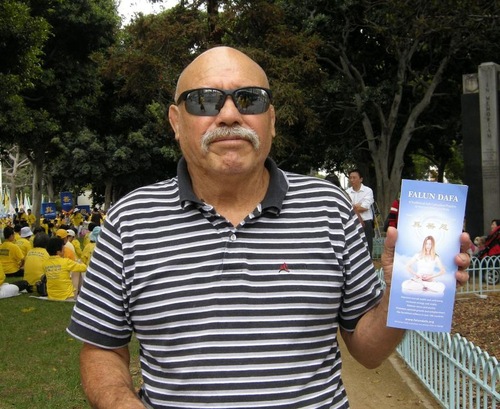 Artuio watched the march and said he'd like to learn Falun Gong.

Artuio, a local worker, got a Falun Gong flyer before the march started. “This group looks so peaceful and wonderful,” he said. “I also saw that practitioners are from different races and countries. I want to learn these exercises.”

“Los Angeles: Rally of 4,000 Calls for Stopping the Persecution of Falun Gong in China”