(Minghui.org) Falun Gong practitioners from Montreal, Ottawa, and Sherbrooke held a march and rally in Montreal's Chinatown on October 12, 2015. The date coincided with Canada's Thanksgiving Day, the second Monday of every October.

After Mr. Wang spoke at the rally about how much he had improved mentally and physically by practicing Falun Gong, he said he was grateful to the meditation system and its founder Mr. Li Hongzhi. Because of his belief and for telling others about Falun Gong, he was arrested twice in China and held in a forced labor camp for over a year.

“The slave labor was intense—at least 16 hours day,” he recalled.

Besides calling for an end to the persecution of Falun Gong in China, the event also raised awareness about the recent lawsuits being filed against Jiang Zemin for initiating the suppression. Over 180,000 criminal complaints have been filed against the former Chinese leader. 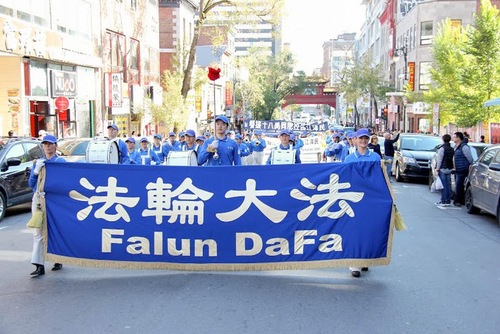 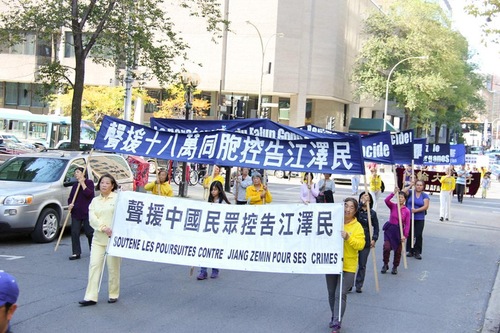 In Chinese and French, the banner says, “Bring Jiang Zemin to Justice for His Crimes.”

The mistreatment practitioners in China have endured for their belief ranges from arrest, detention, imprisonment, forced labor, and torture to forced injection of unknown drugs. The most notorious practice is the harvesting of organs from living practitioners in state custody.

Since first made public in 2006, this issue has drawn widespread attention, especially through the efforts of Doctors Against Forced Organ Harvesting (DAFOH). Several books written by medical professionals and journalists have highlighted the severity of the crime, including Bloody Harvest (2009), State Organs: Transplant Abuse in China (2012), and The Slaughter: Mass Killings, Organ Harvesting, and China's Secret Solution to Its Dissident Problem (2014).

He did not understand why they were subjected to such exams and tests until he was released and heard about live organ harvesting. These tests, especially blood samples, are necessary to match blood and tissue types.

“Officials treated detained practitioners like dirt, and many of them went missing. They could have been victims of this atrocity, while I survived to share this experience with you here today.”

Mr. Zhou, another practitioner who spoke at the rally, said he and four family members suffered for their belief. “Both of my parents were beaten and tortured while they were imprisoned. My mother was also forcibly injected with unknown drugs, which led to memory loss.” One of his mother's friends died in prison as a result of physical torture and mental abuse.

“We hope more people support the lawsuits against Jiang,” Mr. Zhou said, “because it is just of matter of time for him to be brought to justice. We hope this day will come soon, before more innocent people are harmed.” 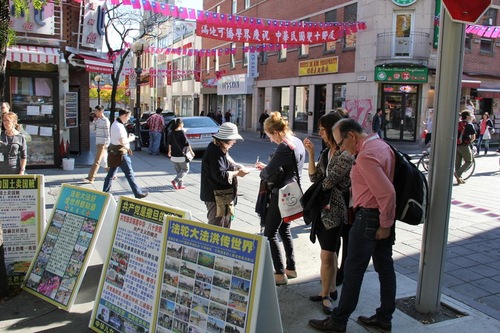 Many tourists and residents in Chinatown signed petitions to support practitioners. When they heard just how brutal the Chinese Communist Party (CCP) is, some Chinese decided to quit the organization.

One young couple said they had joined the Communist Youth League back in China. “But we seldom attended its events, let alone pay the membership fee,” they remarked. After a practitioner explained why they should sever their ties with the regime, they agreed.

A Chinese student studying in Montreal said he was glad to see this event, because many people had been fooled by the Party's propaganda. For example, he did not know what really happened at the 1989 Tiananmen Square Massacre or about suppression of Falun Gong until he left the country.

“Jiang is rotten to the core, and he should be punished for his crimes,” said the student as he signed a petition. 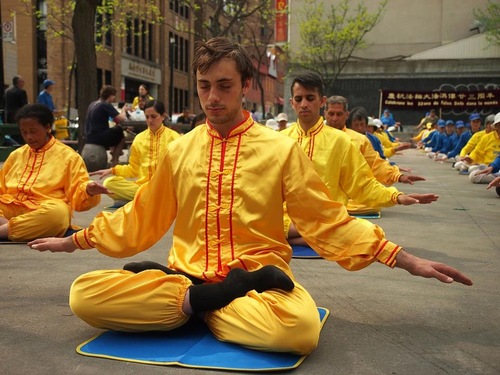 Practitioners demonstrate Falun Dafa meditation in Montreal during the World Falun Dafa Day celebration on May 9.

“Helsinki, Finland: Learning Peaceful Meditation on Campus and at a Health Expo”

“Snapshot of Falun Gong Practitioners Whose Copies of Lawsuits Against Jiang Zemin Were Received by Minghui on September 12-13, 2015”