(Minghui.org) Falun Gong practitioners in Toronto protested against Luo Zhijun, Communist Party Secretary of Jiangsu Province, during a closed-media meeting with Premier of Ontario Kathleen Wynne on October 7, 2015. Because Luo was a core member of Jiang Zemin's regime and one of the chief perpetrators responsible for the persecution of Falun Gong, practitioners in Toronto are calling for bringing Luo to justice.When questioned by the media, Ms. Wynne said she agreed to exclude the media from all three events she had scheduled with Luo because she had been asked to do so. 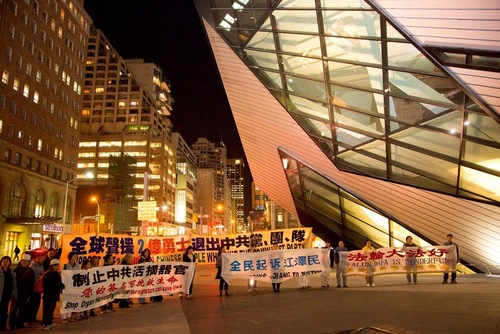 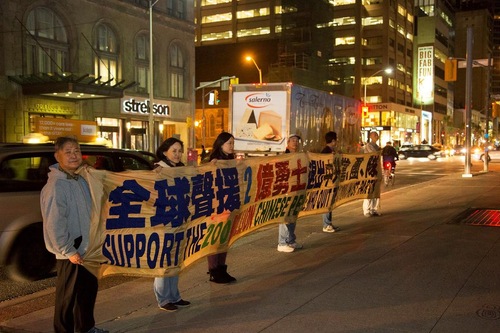 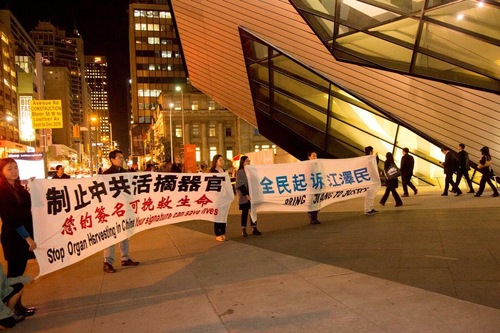 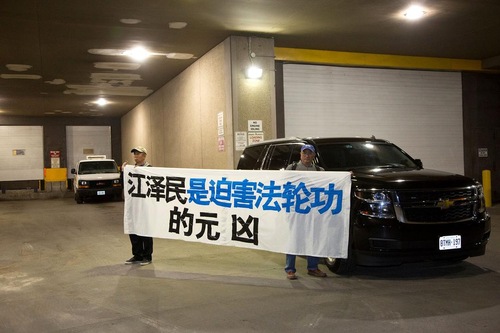 Falun Gong practitioners display banners in front of the Royal Ontario Museum to protest against Luo Zhijun for his role in the persecution of Falun Gong.

Wynne and Luo signed an Ontario-Jiangsu Friendship Agreement in the Royal Ontario Museum in the evening. 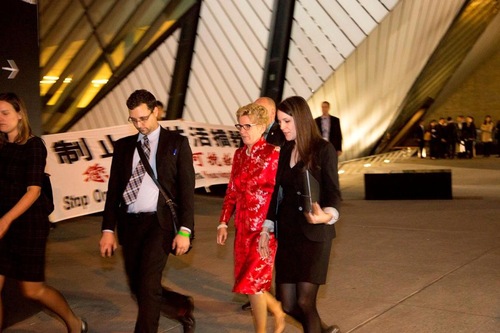 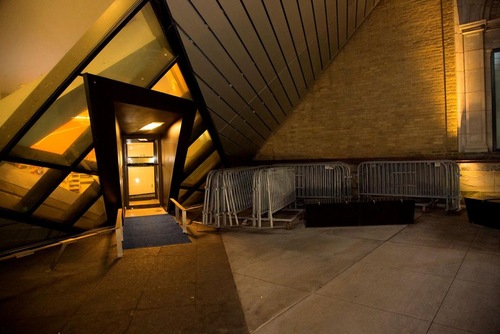 Luo left from the back door of the Royal Ontario Museum to avoid protestors.

After the meeting, Luo and his group left from the back door of the museum to avoid the protestors.

According to Joel Chipkar, spokesperson for the Falun Dafa Association of Canada, Luo was one of the chief perpetrators in the persecution of Falun Gong. Countless practitioners have been arrested, imprisoned, tortured and their organs harvested under Luo's direction. At least 48 practitioners in his province have died from persecution. Mr. Chipkar said that Falun Gong practitioners want to bring Jiang and other chief perpetrators to justice. He said, “It was not wise for Ms. Wynne to meet such a person who is suspected of massive human rights violations, let alone kowtow to his desire for privacy and closed-door talks.”

Luo Under Investigation by WOIPFG

Mr. Wang said Luo's request to shut the media out of his meetings in Canada was related to his involvement in the brutal persecution of Falun Gong.

While events were closed to the press, some hand-picked Chinese press were there at the invitation of the premier’s office. However, the Chinese edition of the Epoch Times newspaper was not invited. When reporter Becky Zhou from the Epoch Times attempted to attend a reception held at the Royal Ontario Museum, she was prevented by a staff member of Wynne.