(Minghui.org) Ms. Kong Hongyun has been continuously persecuted for her belief in Falun Gong, and is waiting to be tried for the third time on December 26, 2014. Her elderly mother has been peacefully protesting near the entrance of the Xinshi District Court and requesting the local authorities to release her daughter. 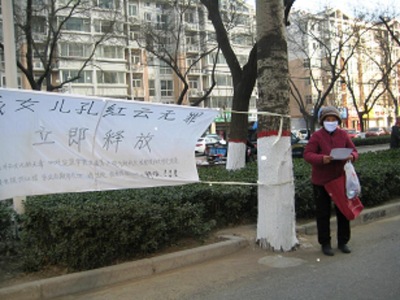 Ms. Kong's mother protesting near the entrance of the Xinshi District Court.

Ms. Kong was illegally arrested on January 4, 2014, by police officers from the Jingxiu Park Police Station. She has been tried twice in the detention center without a verdict being reached.

The first trial was held on February 12, 2014, but was adjourned because there was no witness. The case was sent back to the Xinshi Procuratorate for further investigation. The procuratorate was given an extension in June, and a second trial was rescheduled.

The second trial was held on September 3, 2014. Ms. Kong's lawyer stated that there was no legal basis for the charges against his client, and the prosecutor failed to provide evidence that Ms. Kong had caused harm to others or to society. He demanded that Ms. Kong be acquitted and immediately released. The trial was adjourned without reaching a decision.

Ms. Kong's mother and daughter have gone to the court multiple times to appeal for her release, but to no avail. Her mother received a notification on December 22, 2014, that a third trial would be held on December 26. She decided to protest near the court entrance by holding a banner to request for her daughter's release. She hopes to let more people know about her daughter's situation.

Ms. Kong, 43, is from Baoding City in Hebei Province. She was formerly a medical professional at the Xiantai Township Hospital in Mancheng County. She has been harassed, monitored, arrested and tortured by the local authorities since the persecution of Falun Gong began on July 20, 1999.

“Watching Shen Yun Led Me to Cultivation—Recovered from Breast Cancer”