It’s been three years since the last experience sharing conference was held in Hong Kong. Twenty-one practitioners presented articles on their personal experiences in cultivation and efforts to raise awareness about the persecution in China. 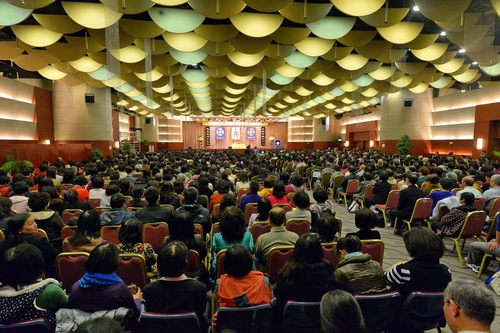 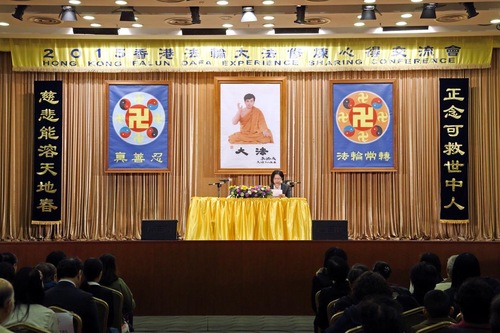 Twenty-one practitioners shared insights and experiences in following the teachings of Falun Dafa.

Ms. Li shared how she and other practitioners were falsely charged and sued by members of this group. Ms. Li said she was pressured by her lawyer (pro-CCP) to confess to the so-called crime and warned her that her chance of winning the case was slim. The lawyer even threatened to withdraw from the case unless she pleaded guilty.

Ms. Li decided to defend herself.

During the trial proceedings, the judge, the staff and officers in the court heard the facts about the persecution of Falun Dafa. They began to support Ms. Li’s defense. In the end, Ms. Li, who knew nothing about the laws and faced the pressure of her lawyer and many senior officers, won the case.

“I let go of my attachment of resentment and I became calm. My wisdom grew and grew. I was able to answer the prosecutor’s questions and found many mistakes in his arguments,” said Ms. Li.

Practitioners in Hong Kong withstood tremendous pressure from the government and did everything they could to let more people know about the ruthless persecution.

Seeing how hard the Hong Kong practitioners had to work when the number of tourists from China surged, practitioners in Taiwan often flew to Hong Kong in their spare time to help in their efforts to reach the Chinese people with the facts.

Mr. Zhang from Hong Kong was close to 80 years old. He was once so ill that he thought of committing suicide, but all his symptoms disappeared after he became a practitioner. Every day he carried over 500 copies of informational materials about Falun Dafa and distributed them in different neighborhoods. Sometimes those who had been deceived by the Chinese regime’s slander of Falun Dafa would spit on him or throw the literature back at him. He was never deterred.

Ms. Huang, a high school teacher from Taiwan, said that the most rewarding experience she had during her trip to Hong Kong was realizing how much she needed to improve. The practitioners in Hong Kong paid great attention to studying the teachings and had a tight schedule every day so as to best use their time for raising awareness. She was originally planning to stay for eleven days on that trip, but decided to extend it to two months.

Ms. Tan and Ms. Cui were both new in the practice. Ms. Tan learned about the persecution of Falun Dafa from the Epoch Times website. She read many articles on the Minghui website and was intrigued. She found a copy of the book Zhuan Falun and began to practice in 2011.

Ms. Cui completed Zhuan Falun in just two nights when she decided to become a practitioner in 2013. She shared how she struggled to let go of her attachments and told her family about Falun Dafa, dispelling misconceptions they had due to the Party's propaganda.

Mr. Zhou received a copy of informational materials and began reading the Epoch Times website. He downloaded Falun Dafa lectures from the Internet and read articles on Minghui.org.

“I learned how to practice without other practitioners’ help or attending Teacher’s lectures in person. I'm grateful to the compassionate Teacher and the amazing power of Falun Dafa,” said Mr. Zhou.