(Minghui.org) Falun Gong practitioners raised awareness of the persecution in China, in particular the state-sanctioned forced organ harvesting, on January 10, 2015, at Perth's city center. Many people stopped to learn more and sign a petition. A number of Chinese people also took a stance against the atrocities by withdrawing their memberships in the Chinese Communist Party (CCP) and its affiliates. 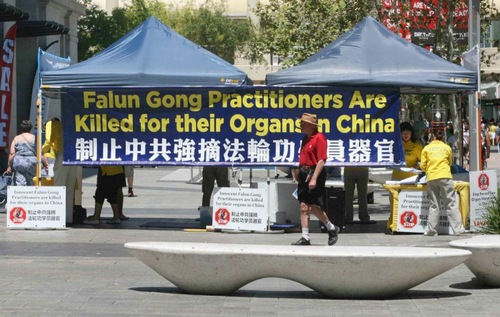 “This [the Persecution] Shouldn't Happen!”

Sheila Bartter and husband stopped at the booth when they saw the torture re-enactment. “Could you tell us what is going on here?” asked Ms. Bartter. The couple stayed for a while to chat and ask questions about Falun Gong. They signed the petition and bought a bottle of water for the practitioner who had spoken with them at length. 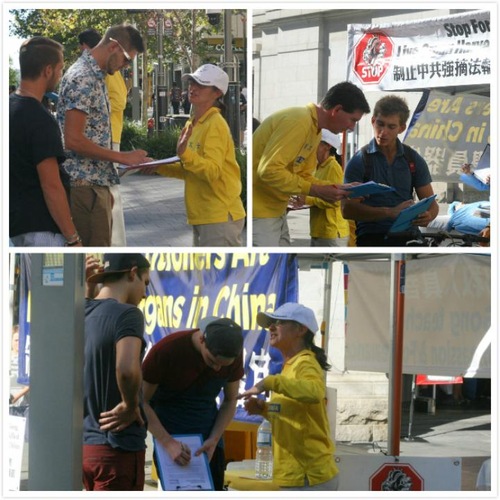 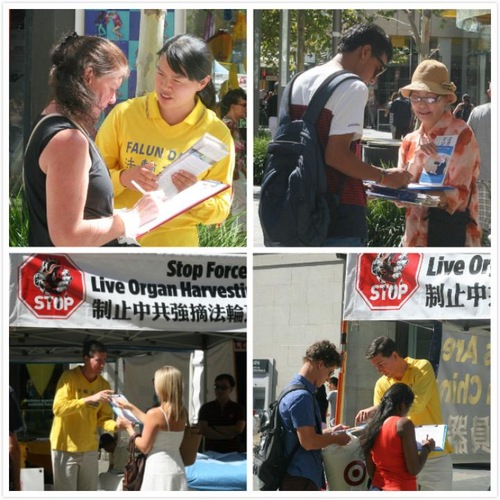 Ashley Tailor, a student dressed in fashionable clothing, was from Bunbury, a city in south Western Australia. “I never heard about Falun Gong before, nor live organ harvesting.” She signed the petition, and with strong interest in traditional Chinese culture, she asked for a copy of all of the materials. She also took information on the local practice sites.

“This is terrible! It shouldn't happen!” exclaimed another woman, Mary, who was hearing about the persecution for the first time as well. She said the perpetrators in China should be punished.

One tourist from China talked of her quest to find the facts: “I was able to access overseas websites through Dynaweb (a tool that breaks through the internet firewall in China). So I knew the CCP was bad and lies. But for Falun Gong, I still didn't know much.”

A trip to France five months ago changed her perception. “I was able to learn the truth about the staged Tiananmen Square incident.” A later trip to Hong Kong made her aware of the CCP's massacre on Tiananmen Square in 1989. “Since then, I began to see clearly the wicked nature of the Party. ” So on this encounter with Falun Gong in Australia, she decided to quit her membership to the Party's organizations.

When an immigrant from Northeast China and her daughter passed the booth, a practitioner gave her a pamphlet and she refused to take it. “I did join the CCP's Youth League and Young Pioneers a long time ago. But I am too old for those organizations now and am not involved. Why bother quitting them?”

The practitioner explained the spiritual significance of severing all ties to the Party. The woman was convinced.“I see. We Chinese have so many problems now. Many of them were actually caused by the CCP. ” He daughter also quit the CCP's Young Pioneers.

Ms. Wang (alias), an immigrant investor who recently came to Western Australia from China, signed a business deal with the help of a local practitioner. She agreed to quit the CCP organizations after the practitioner told her about Falun Gong and the persecution. Ms. Wang then told the practitioner that some of her business partners from China would visit her and they could probably meet sometime.

One day the practitioner contacted Ms. Wang via instant message, who said she was staying with those friends in Melbourne, but that they might not have time for Perth. The practitioner felt bad because she might not be able to meet those people again and tell them about quitting the CCP.

Then she came up with an idea. The practitioner asked Ms. Wang if she could record a message for her to share with her friends. Ms. Wang agreed and they began to work on it. There were so many topics to cover, from what Falun Gong was, the staged self-immolation incident in Tiananmen Square, to the recent downfall of high-level officials for persecuting Falun Gong. She ended up sending 12 voice recordings, while Ms. Wang relayed them to her friends.

After a while Ms. Wang sent over a list with five people's real names—all of them agreed to quit the CCP's organizations. “Because they have to go back to China for business,” Ms. Wang explained, “they hope to quit the CCP using an alias, as you suggested. But for each of them, please include one Chinese character from the real name when you assign an alias.”

This practitioner happily obliged and on their behalf submitted their withdrawals from the Party organizations.