(Minghui.org) Many people say, “Cool!” when they see how impressive Mark Tickner looks in his police uniform holding his gun. Off duty and in civilian clothes, Mark is a polite and gentle man.

Mark is a college graduate, and both his parents are university professors. He has a wide range of interests, including running marathons, surfing, and scuba diving. Why would a Canadian like Mark be attracted to this ancient practice, Falun Dafa, and begin cultivating? 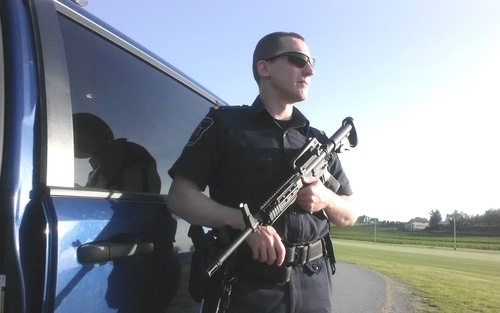 Mark loves to run marathons, surf, and scuba dive during his spare time, but his work environment is “not fun at all." He studied criminology in college and after graduating began working at the Federal Corrections Service in Greater Vancouver. Police work is serious and intense, often leaving him exhausted physically and mentally.

Not only is Mark's work tough, he also trains in self defense and rock climbing. He once broke his leg rock climbing and had to recuperate for eight months.

At work, Mark is in constant contact with inmates. He was tense every day, and it was hard to remain calm. Sometimes his would have extreme thoughts and got angry easily. He occasionally brought his work home with him and could not help but reprimand his mischievous son. He only realized that his mood was not right when one day his son said to him, “I'm not a criminal!”

When he calmed down, he often wondered, “What's the point? What are we living for?”

Mark's wife Xiaoxiao is from Northeast China. She started practicing Falun Gong in college. She said, “Although my cultivation wasn't diligent at that time, Falun Gong had already taken root in my heart.” She came to Vancouver to study in 2000.

Mark met Xiaoxiao in June 2006 while she was working in a restaurant. Mark was a regular customer, and in time they became friends. The world is so small – they realized later that Mark's mother was one of Xiaoxiao's teachers. By the end of the year they were married.

While they were dating, Xiaoxiao recommended Falun Gong to Mark. She said, “At that time I thought that, if he opposed it, I would not have anything more to do with him, but he said that he respected my belief. I gave him the book Zhuan Falun. He started it but did not finish, and what he read didn't sink in.”

Although the content didn't sink in, the predestined relationship with cultivation was there. In June 2013, Mark felt especially tired after completing a 30-kilometer marathon run, and he suddenly thought of Falun Gong: “I should finish reading that book Zhuan Falun.” Mark asked his wife for Zhuan Falun and told her that he wanted to understand Falun Gong.

Mark said he was determined: “When I first started reading Zhuan Falun, my head really hurt. I could only read it for half an hour at a time.” He was somewhat puzzled, but this only prompted him to be determined to finish it. When he finally completed Zhuan Falun, he understood Falun Gong.

The early lectures in Zhuan Falun mention guiding people toward higher levels. Mark said, “It seemed very mystical. After I read Zhuan Falun, when I stepped into the office the next day, my colleague said to me, 'Welcome to another level.'”

Mark felt a Falun spinning in his abdomen the first time he read Zhuan Falun. At that time, he still insisted on marathon training every day. He said that, not long after he began practicing Falun Gong, he quickly recovered physically, and the tiredness he always felt after running 30 kilometers was gone. 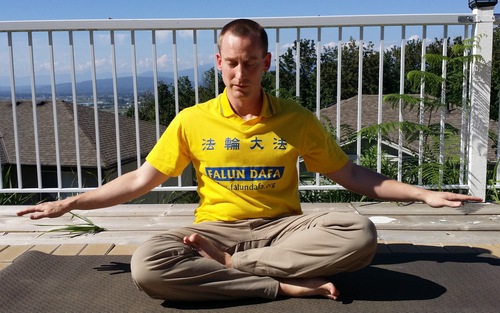 Mark started cultivating. He learned the five exercises and listened to Master Li Hongzhi's lecture audio recordings. He often reads the books on the Falun Gong website and within two months he had read all the teachings from the various conferences. He has become more determined in cultivation. Watching the positive changes in him, the happiest person of all is his wife, Xiaoxiao.

Those who cultivate Falun Gong know about the miraculous healing properties of this practice, and many have experienced having their bodies cleansed as mentioned in Zhuan Falun. Some of the original symptoms of the illnesses may appear, but the person will not really be sick. Instead, it is a process of having the body cleansed. When the root cause has been completely removed, the body will truly become healthy.

When Mark first started practicing, he could feel Master cleansing his body. The bad substances in his body were pushed out. He vomited a lot but remained in good spirits. This lasted for two weeks.

In Zhuan Falun Master Li mentioned the relationship between illnesses and karma and how a cultivator should face it. Mark personally experienced this. One morning when he woke up he had no feeling in his face. His face also looked strange, and eventually he could not close his eyes. It was facial paralysis.

He applied for a two-day sick leave and went to work on the third day. His colleagues tried to persuade him to go to the hospital, but Mark understood that he would be fine. He continued to go to work every day and increased the amount of time he studied the Fa and did the exercises.

He had a dream one night. He remembered clearly that he was wrestling with another being and that they were trying to kill each other. In the end, the being split Mark's face with an ax. Mark said that he woke up instantly and understood the reason for his facial paralysis. He truly felt that everything written in Zhuan Falun is true.

The paralysis improved with each passing day, and he recovered completely after four months. His colleagues were surprised that he recovered without going for treatment.

Through this experience, Mark gained a deeper knowledge of Falun Gong and has a new understanding of life. Mark said that his heart has become broader.

A Peaceful State of Mind and Treating Others Kindly

Mark feels that his mindset has changed, that he understands where he came from and where he should go. He knows why he is living on this earth. His mind has become especially calm and peaceful, and he is no longer irritable or anxious. Not only does Mark treat his colleagues with kindness, he also tries to have kind thoughts when in contact with suspects.

Mark was in tears after coming home from work one day. When Xiaoxiao asked him why, he said that a colleague had wronged him. Mark was not sad for himself, he was sad for his colleague who would end up losing virtue.

Mark also said that he used to be angry whenever he saw things he did not understand. Now, he thinks of others more and especially wants them to know about Falun Dafa so that they can benefit from it. 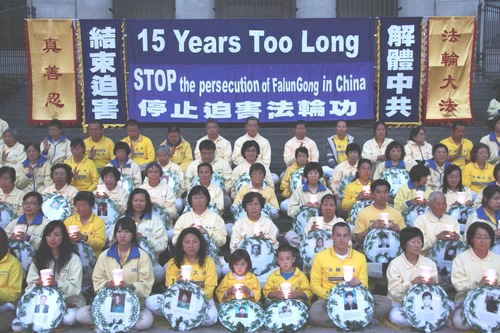 Mark (1st row, 3rd from the right) and his family attend the candlelight vigil held by Falun Gong practitioners in Vancouver on July 20, 2014.

The Beauty of Cultivating

Mark and his wife have two children, a 6-year old son and a 4-year-old daughter. Guided by their mother and maternal grandmother, the children were introduced to Falun Gong when they were young. They listen to Master's lecture audio recordings and practice the exercises every day. They do not put down their legs even when they hurt from sitting in the lotus position. They are proud to be young Dafa disciples. The whole family sincerely appreciates Falun Dafa. 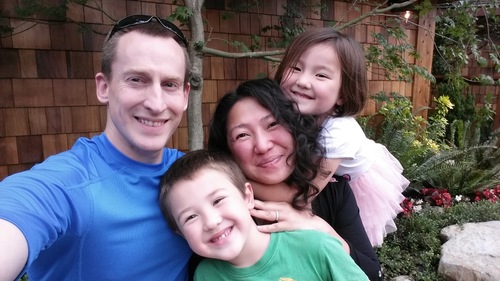 A group photo of Mark and his family

Mark said that, since he started cultivating late, he has to make good use of his time. He takes Zhuan Falun with him wherever he goes and reads it when he has time. He feels that no matter how much he reads, it's still not enough.

Looking back, Mark said that all his previous doubts have been resolved. He has enlightened to why he came to this world – to obtain this Fa. Why did he meet Xiaoxiao and marry her? He smiled, “It was arranged for her to introduce me to this Fa.”

What are Mark's deepest impressions after practicing Falun Dafa for more than a year? He said, “Understanding what cultivation is, why there is a need to cultivate, and that cultivating in Dafa is the greatest thing.” However, he corrected himself immediately, “I can't use the term 'greatest,' because this is a human word. No word in the human language could express my gratitude to Master.”

“One Thought Can Make the Difference Between Life and Death”