(Minghui.org) The Art of Zhen, Shan, Ren International Exhibition opened in Hamilton, Ontario Canada on September 3, 2014. Special guests, including MP Wayne Marston, attended and gave speeches at the opening ceremony, stressing the importance of paying attention to the persecution of Falun Gong in China. 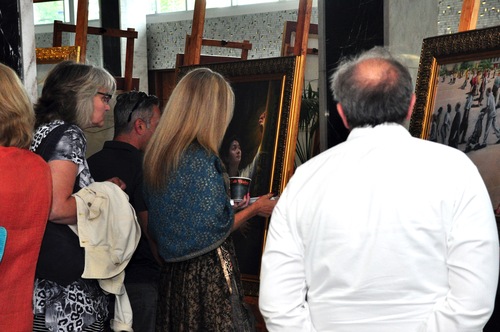 MP Marston said during the opening ceremony that he had attended several hearings on human rights violations against Falun Gong practitioners in China. He knew details of the persecution, including the crimes of harvesting organs from living practitioners for profit.

He told the audience that investigations had concluded that Falun Gong practitioners were the targets of organ harvesting. A Chinese doctor who had conducted cornea transplants in China testified about it.

MP Marston praised Falun Gong practitioners for their peaceful and persistent resistance to the brutal persecution. He said that the exhibition played an important role in spreading the truth about the persecution. 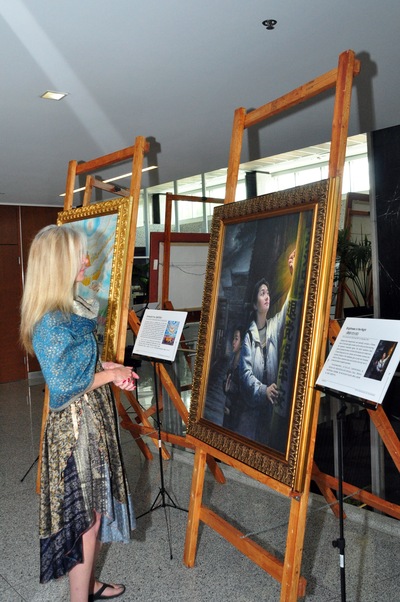 Linda Lannigan, founder and CEO of Fix Our World, studies the painting “Brightness in the Night.”

Linda Lannigan, founder and CEO of the non-profit organization, Fix Our World, praised the artworks as beautiful and heavenly. She was very touched by the beauty and the spirit in the pieces. She spent a long time studying the painting “Brightness in the Night,” and said that characters in that lively painting touched people's hearts.

Ms. Lannigan's organization aims to bring inner peace, balance between mind and body, good health, and happiness to peoples' lives. She said she could tell from the artworks that the Falun Gong practitioners' spirits were free, and that was why they could steadfastly face the persecution. 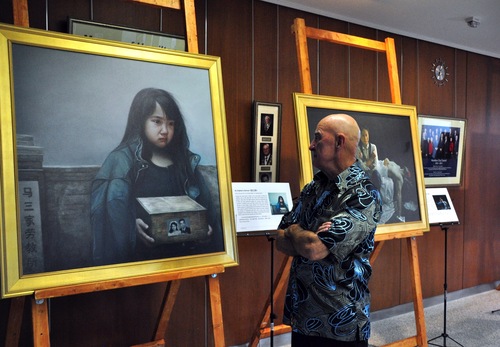 Mr. Ross Bowyer has taught English in a university in China. He recounted a unforgettable experience. One day, close to 30 Chinese students gathered in his home. A student found a couple of Falun Gong truth-clarifying flyers.

“They freaked out, and told me, 'You can't keep these.' They even wanted to take the flyers away. I was surprised by their reaction to the flyers. About half of the students left in a hurry.”

Mr. Bowyer said he could understand now why they were so afraid. Mr. Bowyer had a special feeling about the painting “An Orphan's Sorrow.” He said it was a very touching work of art. He could see the sorrow and confusion in the face of the little girl, who couldn't understand why her parents were killed (due to the persecution). 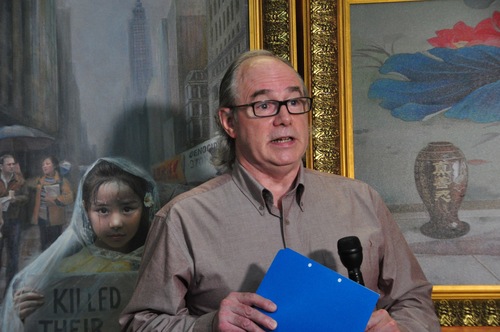 Retired professor Reid MacWilliams from Mohawk College told the reporter that he first learned about Falun Gong during a trip in 2008. He and his wife watched a parade and got to know a Falun Gong practitioner named Jane, whose husband had died as a result of persecution in China.

Professor MacWilliams and his wife were very disturbed by the brutality of the persecution. He had invited Jane to give speeches in several places, including Mohawk College. MacWilliams showed great concern over the human rights violations in China.

The art exhibition will remain open until September 23. The hours are 8:30 a.m. To 4:30 p.m. Monday through Friday on the second floor of the City Hall.

“Torture Methods: How Guards Torture Practitioners With Their Bare Hands (Part 1 of 5)”