(Minghui.org) Today's news from China includes incidents of persecution that took place in 12 cities or counties in 8 provinces. According to this report, 9 Falun Gong practitioners were subjected to mistreatment during their detention, and at least 10 practitioners were illegally arrested. 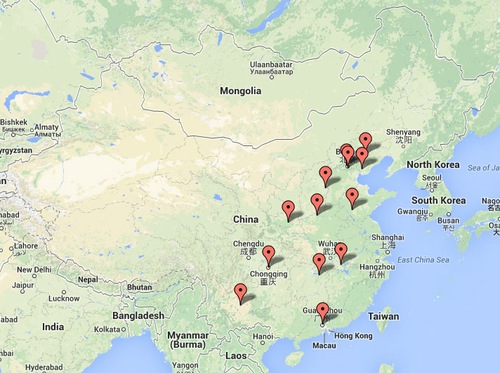 Mr. Wang Jigui was arrested on August 4, 2014 for distributing DVDs about Falun Gong. He faces a prison term.

Ms. Zhao Guiyan was arrested and taken to the Qianxi Detention Center on July 30, 2014 for talking to people about Falun Gong. On August 3, she didn't feel well. Instead of taking her to a hospital as promised, the police took her to the Tangshan City No. 1 Detention Center.

More than two dozen officers from the police department and police station in Doudian Town, Fangshan District broke into Ms. Zhao Shuhua's home on the morning of August 14, 2014. They took her to a brainwashing center.

The police ransacked the rental apartment of Ms. Chen Ping's son, where she lives. They confiscated Falun Gong books, a portrait of the founder of Falun Gong, DVDs with information about Falun Gong, a computer, her identity card, and 2,800 yuan.

Mr. Wang Shuwen, 59, from the Dudaiyingzi Village, Qijiadai Township, was arrested by Pingquan County Police Station officers on the afternoon of August 17, 2014. He was putting Falun Gong informational materials in a car through its rolled-down windows.

Ms. Wang Xiufeng was arrested by officers from the Liangxiang Police Station in the Fangshan District on July 17, 2014. She was taken to the Fangshan Detention Center that night. Her family was not allowed to visit her. Ms. Wang's family has had no information about her since she was arrested.

Mr. Gao Shiyuan was arrested a week ago by Yanta Domestic Security Division officers. He is being held in the Yanta Detention Center.

Ten officers led by Li Qingfeng, head of the Songming County Domestic Security Division, broke into Ms. Wang Juzhen's home and ransacked it on the morning of August 17. Her family then realized that Ms. Wang and others had been arrested.

The police also went to search Ms. Bi Jinmei's home that afternoon. They next searched Mr. Wang Zhengli's office and took the keys to his home. The police ransacked his home when no one was present.

Ms. Wei Zhenmei, in her 20s, was arrested in 2012. She is being held in the Guangdong Women's Prison on a three-year prison term.

Ms. Zhao Yumei and Ms. Xiao Yune were arrested by the Jiangdong Police Station on the afternoon of August 12, 2014 for telling others about the persecution of Falun Gong. They are being held in the Xiangyin County Detention Center.

Ms. Liu Honglan, 69, from Donglinxi Village, Shuyuan Township, was arrested on the morning of August 2, 2014 for talking to people about Falun Gong and the persecution. Officers from the Shuyuan Police Station dragged her into a police vehicle and took her into custody.

She was tied to an iron chair in the police station for eight or nine hours in the summer heat. She was taken to the Zoucheng Detention Center that night.

Ms. Liu remained on a hunger strike for six days in the detention center, during which time, her daughter tried to see her. The police asked for 600 yuan in exchange for granting the visit.

Ms. Liu became too weak to move. The detention center officials were afraid of being held responsible, so they called her family to take her home and extorted 600 yuan from them.