(Minghui.org) Mr. Jin works at a Chinese restaurant in Paris. He is a Falun Gong practitioner and often tells others about the benefits of the practice and about the brutal persecution in China.

Mr. Jin also informs Chinese people about the quitting the Chinese Communist Party (CCP) movement. He has helped many people renounce their membership in the Party and its affiliated organizations. 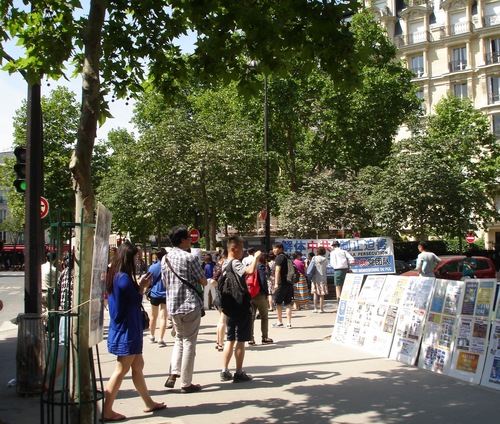 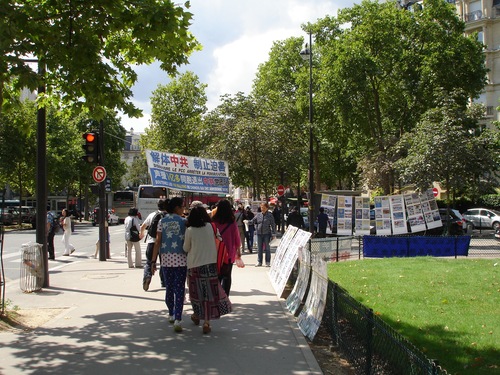 While talking with a Chinese official at a tourist site, Mr. Jin encouraged him to quit the CCP. The man said, "I'm an official. I have money. If I quit, I'll lose all of these things. I can't quit!"

Mr. Jin told him that if he quit the Party from his heart, he would not lose anything materially. He can still be a government official, and earn the money he deserves, only that he won't be implicated when the CCP is punished for the crimes it has committed. The official then agreed to quit the CCP.

The official then pointed at a group of people nearby, and said, "They are all my subordinates,” and then said to them, “Come here and listen. He exhorts you to quit the Party and its affiliated organizations. You won't lose your position or money. It is just about making the right choice. You can all quit!" His subordinates asked for informational materials, and several decided to quit the CCP right away.

It's not always so easy. Mr. Jin once met a Chinese tourists three times at three different tourist sites. The man didn't agree to quit the Party on the first two occasions. When they met the third time, the man asked, "Why do I keep running into you?" Mr. Jin answered, "It's a predestined relationship. I come for you, because you haven't quit the Party. I want the best for you, and hope you abandon the Party and have a bright future." The tourist was finally convinced and renounced the CCP.

Mr. Jin's boss invited his relatives and friends to have dinner, and also invited Mr. Jin.

One of Mr. Jin's boss's friends came from Anshan City in China. He knew Mr. Jin practiced Falun Gong, so he challenged him to say something. Mr. Jin told him about the CCP's persecution of Falun Gong, especially the regime's state-sanctioned forced organ harvesting from living Falun Gong practitioners, and the wave of people quitting the CCP.

When the man still had some objections, Mr. Jin's boss cut in and said, "Don't interrupt him. I can answer your question."

Over a dozen of Mr. Jin's boss's relatives and friends decided to quit the CCP that evening.

“Changing My Notions and Cultivating with Righteous Fa-Principles”