(Minghui.org) Today's news from China includes persecution that took place in 7 cities or counties in 6 provinces. According to this report, 2 practitioners were subjected to mistreatment during detention, at least 5 practitioners were illegally arrested. 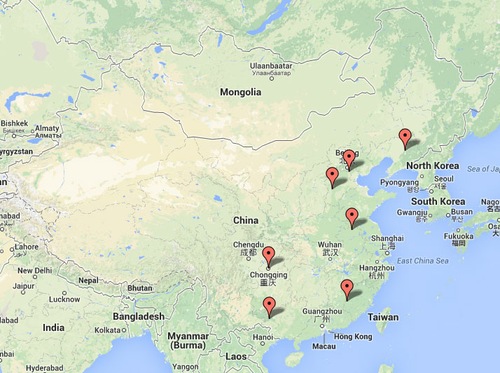 Ms. Xiao Wang was arrested and taken to the Gu'an County Detention Center on August 30, 2014, for distributing Shen Yun Performing Arts DVDs. She was released on September 9, 2014.

Ms. Li Yuting from Rongchang, Chongqing was arrested when she was posting Falun Gong materials on September 6, 2014. She is being held at the Rongchang Detention Center.

Ms. Zeng Suxia, 73, was arrested on the morning of September 11, 2014, at her son's home, by officers from the Suzhou 610 Office, the Yongqiao District 610 Office, the Political and Legal Affairs Committee, and the police department. She was taken to the brainwashing center which is held at the Keyuan Hotel.

Ms. Zhang Lingxue was arrested on May 28, 2014, by officers from the Sijiazhuang Town Police Station, when she was talking to people about Falun Gong in Sijiazhuang, Luquan. She was taken to the Shijiazhuang No. 2 Detention Center. She is facing an illegal trial. Her case has been submitted to the Luquan Court.

““Has anyone seen me beating you?””