(Minghui.org) My name is Li Yushu. I am a Falun Gong practitioner from Daxing'anling, Heilongjiang Province, and I'm 65 years old. After 15 years of persecution at the hands of the Chinese Communist Party (CCP), I have been turned from a healthy person into a frail old lady riddled with health problems.

I lost control of the right side of my body, and my whole body is swollen and feels numb. Much of my skin peeled off from the mistreatment I endured, and my left big toe is covered in splotches of black. My relatives and friends believe that I was given harmful drugs in the final round of force-feeding the day I was released.

The CCP persecuted my family members as well. One of my brothers and my husband lost their lives due to constant rounds of threats, extortion, and extreme anxiety. 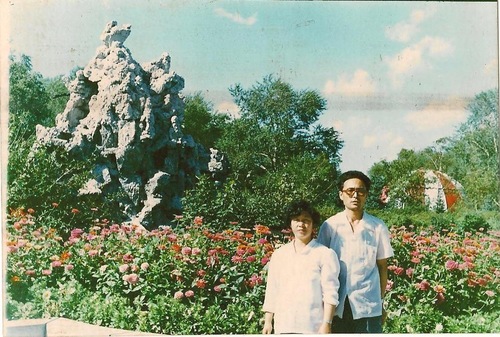 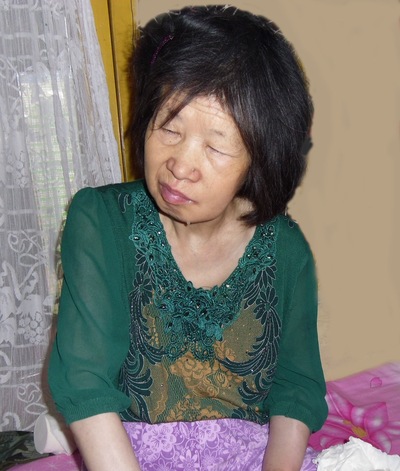 Ms. Li Yushu after persecution: Her mouth and shoulder tilt to one side and saliva involuntarily drips from her mouth 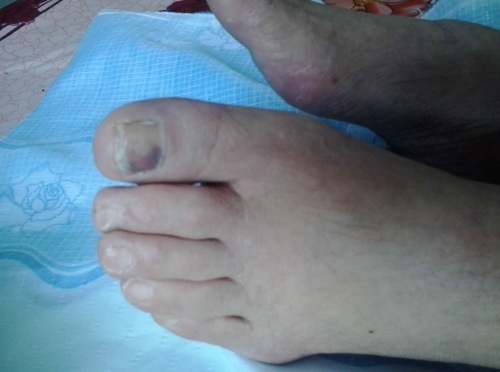 The big toe of her left foot shows black marks

I was sentenced to 12 years in prison in 2002, and starting then, my family was subjected to threats on a daily basis. They suffered enormous mental torment and pressure, especially my brother Li Shuyan (a section-level official in the General Forestry Bureau of Heilongjiang Province).

In 2004, I went on a hunger strike to protest the brutal persecution at the Heilongjiang Women's Prison (also known as the Harbin Women's Prison). Because of my protest, I suffered more vicious treatment and my health deteriorated further.

In order to shirk responsibility, the prison fabricated materials against me. Xiao Lin, section head of the 610 Office, personally videotaped fake images of the head of Division No. 5 chatting with me while inmates fed me. They also made up fake records and tried to trick my family members into signing them in order to persecute me with their “approval.”

My Brother Passes Away

In March 2005, the prison notified my brother that I was dying and asked him to go to the prison immediately. My brother was alarmed upon hearing the news. His son accompanied him to the prison, and when they got there, the guards threatened them. “You must tell Li Yushu to eat,” they said. “Or else you're going to sign off that her death has nothing to do us.”

It was during the 40 days in solitary confinement that I was persecuted most brutally. I became extremely emaciated, and when my brother saw me, he could not hold back his tears. The prison officials then tried to get him to sign another document agreeing that I was not being mistreated.

The prison continued to persecute my family members financially, physically, and mentally. They often went to my brother for money, lying that it was for my medication. They also refused to allow him to visit. All this took a toll on his health, and he passed away near the end of 2005. My family members did not tell me about his death until I was released and returned home.

Husband's Appeal Thrown to the Wayside

He could not understand why I was being treated so cruelly. I told him that following Falun Gong's principles of Truthfulness-Compassion-Forbearance was the most important thing, and that anyone who treats people who follow those principles with such wickedness can only be evil. My husband understood, so he also refused to sign the documents.

After he returned home, he appealed to the local Procuratorate against the unlawful sentence imposed on me. He went around to try to get his appeal heard, but he received no reply for years. My husband was very disappointed, and when he visited me in 2005, just as he started to tell me about the appeal, a guard cut him short and dragged me away.

I saw my husband again in 2006. By that time, his hair had turned gray and he had lost all his teeth. He said to me, “It's all because I feel so worried and anxious about you.”

My husband traveled a long distance from Shandong to visit me every year, but many times, the prison denied his visitation with all kinds of excuses. Even though he was turned away, he still tried over and over.

My family did not know anything about me, and they were worried that I might have already died. They wrote to me many times, but I never received any of their letters. Of course, they never heard anything back from me, either.

Once I heard that there was a letter for me from home, so I went to ask the Division leader Zhao Xiaofan. “Yes, there is a letter for you,” he said. “But there is nothing in the envelope.”

Not knowing anything about me, my husband fell ill under the extreme anxiety.

One day in 2013, the head of the prison told me that he could arrange for a family visit, so I told him my niece's phone number. She came and I was very happy. However, when the guards saw that my head was covered with bumps and bruises from the beatings, they found an excuse and sent my niece back. My husband was waiting anxiously for news about me, but once again he was left disappointed.

The scars on my face took a long time to heal. When they finally did, I requested a family visit, but by then my husband was already too sick to come. My nearly 80-year-old sister-in-law came with my niece, but the guards once again made it difficult for them by asking for their IDs and certification letters to verify that they were not Falun Gong practitioners.

My niece argued. “You told us to come and you never mentioned any certification letter,” she said. “We've traveled such a long way to come, so please let us see her so we know if she is still here. The rest of her family is waiting for news.” However, the guards still denied the visitation, and once again, my family members came a long way for nothing.

All the while, my husband was waiting anxiously for any news about me, but the guards at the prison refused any chance at visitation before his death. He died a few days after my sister-in-law and niece attempted to visit. He was 63.

I survived 12 years of cruel persecution and managed to come out alive. Many other Falun Gong practitioners and their family members have not made it through.

There are still many Falun Gong practitioners being held in detention centers, brainwashing centers, and prisons, who are suffering the most brutal of persecutions. The world must not allow such treatment of good people to continue any longer.