(Minghui.org) Today's news from China includes incidents of persecution that took place in 6 cities or counties in 4 provinces. According to this report, 12 Falun Gong practitioners were subjected to mistreatment during their detention, and at least 5 practitioners were illegally arrested. 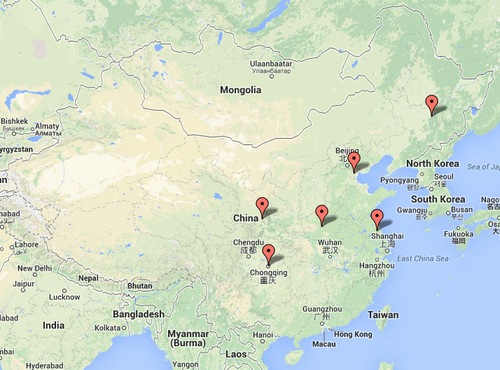 Mr. Qu Hongxiang from Lianhua Township was arrested by police station officers and officers from the Shulan Domestic Security Division on August 28, 2014. He is being held in the Nanshan Detention Center.

Ms. Yang Yuexia was arrested on September 2, 2014. Her whereabouts are unknown.

Ms. Wang Yonghui, 78, was arrested by police station officers and members of the 610 Office when she distributed Falun Gong informational materials in May 2014. The officers ransacked her home and took Falun Dafa books and materials. Before releasing Ms. Wang, the officers located her daughter and coerced her into signing a guarantee statement on behalf of her mother.

Ms. Zhao Lijuan was arrested by officers from the domestic security division and the Dongpuwa Township Police Station. They searched her home in the Wuqing District and took 8,000 yuan in cash, four cell phones, a computer, and Falun Gong informational materials. Ms. Zhao was taken to the Wuqing District Detention Center that night.

Ms. Liu Wenxia was sentenced to seven years in prison, and Ms. Yang Hemei to four years on September 4, 2014.

“My Wife Can See Again”