Japan: Parades in Osaka and Kyoto Raise Awareness of the Persecution in China

(Minghui.org) Locals and tourists in Osaka and Kyoto had an opportunity to learn about Falun Gong, and the persecution of the peaceful practice in China, on September 13-14, 2014.

Falun Gong practitioners and the Divine Land Marching Band paraded through the busy streets of Osaka and Kyoto, where many people were visiting and relaxing during the weekend, enjoying the beautiful early fall season. The two cities are about a one-hour drive apart, and are core cities in the Kyoto-Osaka-Kobe Metropolitan area, the second largest in Japan next to the Greater Tokyo Area.

Many people signed the petition condemning the persecution, and some Chinese tourists declared their withdrawals from the Chinese Communist Party (CCP) and its affiliated organizations after learning about the global quitting the CCP movement.

Falun Gong practitioners were in the popular shopping district of Nipponbashi, Osaka on the morning of September 13 to raise awareness of the 15-year long persecution.

One Japanese woman who signed the petition after learning about the persecution, was with her son, who is in elementary school, and also wanted to sign. The mother and son returned in the afternoon to cheer the parade.

Practitioners talked to one Japanese man for nearly an hour. He initially held negative views toward the traditional Chinese practice because of anti-China sentiment stemming from recent political conflicts between Japan and China. He gradually learned about and understood the meaning and purpose of the signature drive, and learned the facts about the persecution. He willingly signed the petition before leaving.

Osaka Castle Park is a historical site and major tourist attraction in the city. Members of the Divine Land Marching Band and some local practitioners demonstrated the Falun Gong exercises in the park before the parade started. People walking around the park were surprised to see them. They took photos of the practitioners performing the exercises, and some Chinese tourists could be heard cheering, “Falun Gong is good!”

The Divine Land Marching Band marched through the streets of Nipponbashi at around 4:00 p.m. The orderly parading troupe and pleasant melodies let the spectators feel the beauty of Falun Gong. Volunteers from the Global Quitting the CCP Service Center said that they distributed many fliers along the parade route, and that people were very willing to accept them. One volunteer said that more than ten Chinese people registered their names with him, wanting to quit the CCP. 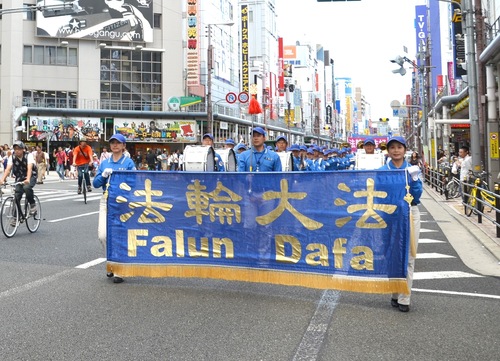 Divine Land Marching Band parades through the streets of Osaka on September 13, 2014.

Parade in the Historic City of Kyoto

Falun Gong practitioners paraded through the ancient city of Kyoto on September 14. Kyoto's cultural heritage and natural beauty attracts tourists all year round.

Practitioners held a signature drive in Shijo Kawaramachi, a vibrant part of the city, before the parade. Many passersby signed the petition condemning the persecution.

The parade circled the streets of downtown Kyoto in the early afternoon for one and a half hours. Many tourists took photos and video footage of the parade. Spectators viewed the banners and took fliers to learn about the persecution in China.