(Minghui.org) Barbro Plogander was a successful Swedish businesswoman, but she suffered from depression. When the depression was severe, she felt that she had no hope in life. She was put on large doses of anti-depressants, but no doctors could tell her if she could ever get better. That was in 2005 and Barbro was in her sixties.

Fortunately, she encountered Falun Gong cultivation practice with its peaceful and gentle exercises and the teachings of Truthfulness-Compassion-Forbearance. After Barbro started practicing Falun Gong, her depression disappeared, and her life is now full of joy. 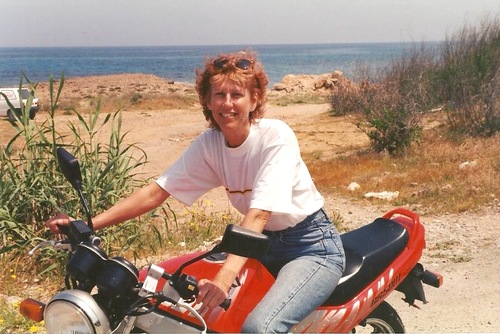 Barbro used to be a manager in a mid-size Swedish company. She was well established in her profession, and had everything a woman could ask for.

However, driven by the desire for more success in the business world, she worked around the clock, and hardly had time to relax. One day, she collapsed from exhaustion.

Her doctor advised that she had no choice but to take a break. She felt dizzy and drowsy all day long, yet had to rely heavily on sleeping pills to fall asleep. Pressure from work and in her personal life all weighed heavily on her, eventually leading to depression.

Barbro recalled, “Back then, my health was so poor that I couldn’t remember anything. I was unable to focus on things that I was working on. I couldn't balance myself, and I was miserable.”

She locked herself in darkness day and night. The former graceful and romantic personality of Barbro had disappeared, and was replaced by a pitiful and distressed woman with no hope for the future.

One day, she saw an announcement in a local newspaper that there would be a Falun Gong exercise class at the local community center. The article introduced the Falun Gong exercises as being able to help reduce stress, improve one's quality of life, and said that the practice is beneficial to people both physically and mentally. Barbro wanted to give it a try. That thought alone filled her heart with hope and she couldn't wait for the class to start.

The community center is located in a small area near Gothenburg, which is a 20-minute train ride from Lerum where Barbro lived. She clearly remembers the day that she first became acquainted with Falun Gong – she was both amazed and excited.

Barbro recalled, “About 26 of us joined the class. We were all Swedish, and most of us were up in years. The class was free and Falun Gong volunteers taught us the exercises. I remember them to this day –Mari-Brit, Steffan and Mike Lee, a British-Chinese person from London. They were all very kind and friendly.”

The Falun Gong exercises contain gentle and smooth movements that are easy to learn. They are good for everyone, old and young. Barbro was very eager to learn the exercises. However, due to her illness she was unable to control her mind, so she could not remember the movements at all.

One of the volunteer instructors gave her the illustrative descriptions of the exercises to help her remember the movements. Barbro also bought a copy of the book Falun Gong, which has exercise instructions and photo demonstrations.

The book, Falun Gong, is for beginners. It introduces the culture of cultivation and the practice of Falun Gong in simple and clear language. As Barbro read it, however, she couldn't remember what she read and therefore couldn’t understand what the author was talking about.

She realized that her memory was a big problem for her. Nevertheless, she was determined to learn the exercises, so she kept repeating one word in her mind: perseverance!

She went back to the community center the following week and spotted another book on the display stand. She told the volunteers, “I want this book – Zhuan Falun!”

Zhuan Falun is the primary book for Falun Gong practitioners. It systematically describes how to cultivate. The content of this book is much more comprehensive than the book Falun Gong.

It was not until one day, when she read:

“After you watch that person leave your body, the master will take this person to practice cultivation in a dimension transformed by the master. It may be in the form of a bygone society, today’s society, or a society in another dimension.” (“Lecture Eight” in Zhuan Falun)

At that moment, she remembered a strange dream she'd before. She used to recall the dream and try to understand what it meant. Now, that dream came back to her and it finally clicked that the dream told her a heavenly secret that was seldom known to people.

She felt excited, but astonished at the same time. “I must read this book one more time!” she thought.

Thus, Barbro began to read Zhuan Falun again, and then again. She would gently open the book to read it, and gently close the book when she finished, as she believes that the book is very special.

Barbro began to ponder, and repeatedly asked herself: “What is cultivation? Am I a genuine cultivator?” She tried to understand the real meaning of the word, “cultivation.”

The concept of cultivation originates from Asian culture, and was a new concept to Barbro. Without completely understanding what cultivation means, and with many questions in her mind, she silently looked at the portrait of Master Li in the front of the book.

Barbro commented, “Looking at Master Li's picture in the book, I felt as if I was talking to him. I asked a few questions, and thought about a few answers myself. I could feel that his eyes could see into my mind. I asked, and Teacher answered. Teacher knew everything, but I knew nothing. I felt that there was nothing I could hide from Teacher. I closed the book carefully.”

Understanding that cultivation is profound and sacred, Barbro felt that she was very small, and a sense of reverence for Teacher grew in her heart. It was a kind of feeling that could not be described in words.

As she continued reading Zhuan Falun, she could sense that her memory was returning. However, it was still not that stable. She asked herself a crucial question, “Am I a genuine cultivator of Falun Gong?”

“I do not talk about healing illness here, and neither will we heal illness. As a genuine practitioner, however, you cannot practice cultivation with an ill body. I will purify your body. The body purification will be done only for those who come to truly learn the practice and the Fa.”

Barbro recalled saying to herself, “If ‘truly learn the practice and the Fa’ means genuinely cultivating, then I want to be a genuine practitioner.”

In June 2005, she finally decided to stop taking all of the anti-depressants, and genuinely cultivate in Falun Gong. That one thought of wanting to “cultivate” made her body feel light, and the depression subsided. She persistently studied the teachings of Falun Gong and practiced the five exercises every day. 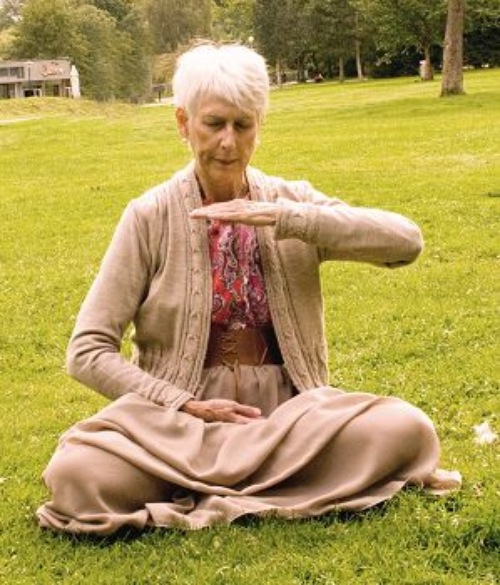 Barbro went to Washington DC to attend the Falun Dafa Experience Sharing Conference on July 22, 2007. Over 5,000 Falun Gong practitioners attended from around the world.

Practitioners from Europe sat in the front and middle sections of the conference hall. Barbro felt so fortunate and grateful that she could attend the conference in good health, and that she was there listening to other practitioners sharing their experiences.

Shortly after the conference convened, she could sense that she was surrounded by a strong energy. She knew that Master Li was there. As Teacher walked across the stage, she could see his face very clearly.

The Swedish practitioners met Teacher again the following day. “Teacher talked to us as if we were long-time friends. He even suggested that we take a group picture together.”

The practitioners all happily surrounded Teacher, and as Barbro moved closer towards Teacher, the camera went “click,” her mind also went “click.”

Barbro said, “I could feel instantly that the damaged part of my memory was reconnected. Teacher had fixed it for me.”

“I no longer feel depressed and sad now that I cultivate in Falun Gong. I’m now more positive and optimistic about the future. Both my body and soul are full of delight,” Barbro said.

She has sold her house, and now lives in a rural area amongst green hills, water and fields. She has also let go of her long-term grudges and happily shares the beauty of Falun Gong with others.

“Guangdong Physician-in-charge Arrested and Tortured for His Belief”