(Minghui.org) Today's news from China includes persecution that took place in 10 cities or counties in 7 provinces. According to this report, 2 practitioners were subjected to mistreatment during detention, at least 18 practitioners were illegally arrested. 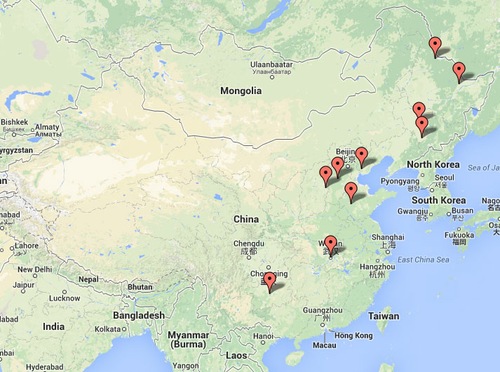 Mr. Li Zuhan from New Hanshui Village was taken away by security guards from the Hanshui Neighborhood Office on August 20, 2014. He is being held at the Wuhan No. 1 Detention Center.

Ms. Wang Qiaolan was sentenced to four years in imprison by the Pingding Court on August 29, 2014.

Ms. Ding Zhubing was followed and taken away by two personnel from the Daxing Neighborhood Committee in Dongshan, Guiyang on the morning of August 27, 2014. She is being held at the Lannigou Brainwashing Center.

Ms. Ren Xiuyun was arrested when she went to the Hegang 610 Office and tried to rescue another practitioner on August 31, 2014.

Ms. Liu Guiying, Ms. An Guiying, Mr. Liu Jinyu and his wife Wu Xinyu from Anjiazhuang Village, Anjiazhuang Town, Feicheng were arrested by officers from the Anjiazhuang Police Station at noon on September 1, 2014.

Officers from the Daxinzhuang Police Station were searching for the location of where practitioners gathered to study the teachings of Falun Dafa in Yanweizhuang, Fengnan District, Tangshan on the afternoon of September 1, 2014. Ms. Meng Xiuyun, Ms. Jialan and Mr. Shurong were arrested.

Ms. Xi Kunying and Ms. Gao Panzhi were reported and arrested when they were distributing informational brochures about Falun Gong on August 29, 2014. Their homes were ransacked. Ms. Gao has been released. Ms. Xi was transferred to the Baoding Detention Center.

“My Thanks to Master Li, the Founder of Falun Dafa”