A Heartfelt Message from Sydney

(Minghui.org) Chinese visitors to the Sydney Opera House are often surprised to see a tall Australian man holding a display board, bearing a message in Chinese: “Welcome to Sydney, Precious Chinese People!”

The man is John Deller, an Australian Falun Gong practitioner. On the display board, Mr. Deller briefly tells of his spiritual inquiry into Chinese culture and how he found Falun Gong. Mr. Deller invites Chinese tourists to learn the true story of Falun Gong and of the brutal persecution of the practice taking place in China.

On seeing Mr. Deller and his placard, many Chinese tourists exclaim in surprise, “Australians practice Falun Gong too! He is here for us!”

Many Chinese people are eager to talk to John, and often take pictures of him and his placard to remember this unique scene in Sydney. 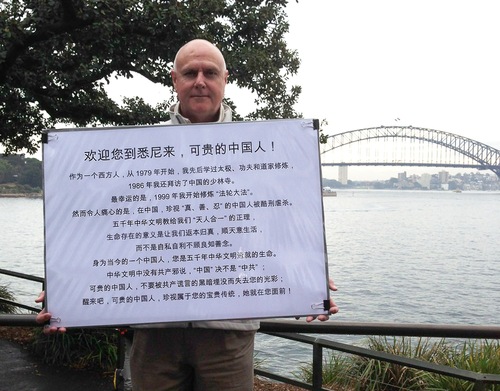 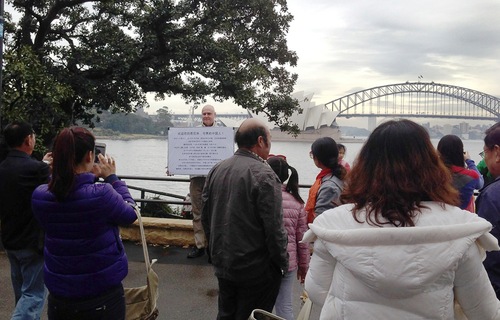 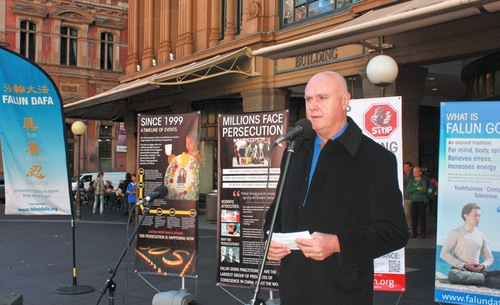 Mr. Deller speaks at a rally calling for an end to the persecution of Falun Gong. 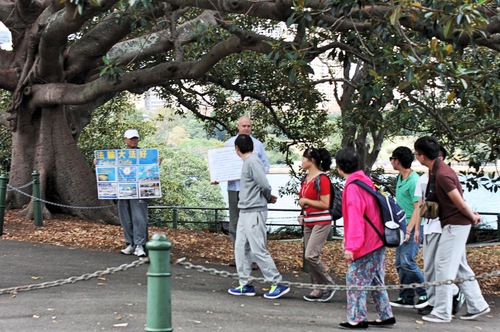 Mr. Deller and his fellow practitioners clarify the facts about Falun Gong to Chinese tourists.

Mr. Deller has a strong wish to bring an end to the persecution of Falun Gong and to help the Chinese people regain freedom of belief.

In November 2001, thirty-six Western Falun Gong practitioners staged a peaceful demonstration at Tiananmen Square in Beijing, holding a large banner reading “Truthfulness Compassion Forbearance.” Mr. Deller was one of the Western practitioners who planned to join the demonstration in Beijing, but his visa application was repeatedly denied. It turned out that his name was on the Chinese government's blacklist because they knew he practices Falun Gong.

Undaunted, Mr. Deller chose to talk to Chinese people in person, right in Australia. John said, “Local Chinese practitioners do a great job of clarifying the truth to Chinese tourists when they visit landmarks in Sydney like the Opera House and Mrs Macquarie’s Chair. I thought maybe I could help too, by writing how I came to practice Falun Dafa and treasure traditional Chinese culture. A practitioner kindly helped translate it to Chinese and I made a sign.”

Mr. Deller clearly remembers a Chinese family who stopped in front of him on the first day he stood at the Opera House.

“A family – a father, mother and son – stopped and read it steadily. Then the son asked me in English, 'Why are you doing this?' I explained that the Chinese Communist Party tortures and kills Falun Gong practitioners because they seek to be good people in the traditional way of Chinese culture.”

John continued, “The Party also stops Chinese people from knowing the truth of their own great culture. It is such a shame, and I hope when visiting Sydney they have a chance to know the truth, and that so many Falun Gong practitioners care about them. Both the son and the father shook my hand, nodded and the son said, 'Thank you, I am sorry for that.'”

A project manager in a consulting company, Mr. Deller follows Falun Gong's principles of Truthfulness, Compassion and Forbearance in his everyday life. He is highly regarded as a hardworking and trustworthy employee at work. Mr. Deller spends most of his spare time working to bring about an end to the persecution in China. He has tried three times to visit China, but his visa applications were denied every time.

Mr. Deller shared his spiritual journey: “As a young man, I wondered why am I here, what is the purpose of life, am I just a body that can easily be destroyed? Should I struggle to survive and prosper, even at the expense of others? I developed an interest in Chinese and Indian teachings and meditation.

“When visiting London in 1979, I started learning internal Chinese Martial Arts from an old Chinese teacher, as well as Tai Chi Chuan, Kung Fu and Taoist meditation. The teacher explained that his master had come from northeast China and I always felt a connection to that area. I also travelled in India and learnt other aspects of meditation.

“In 1986 I went to China and visited the Shaolin Temple. It had been closed after the Cultural Revolution and was being restored and getting popular with Chinese tourists. But I did not make it to the northeast of China.

“Back in Sydney in early 1999 a friend loaned me the book Zhuan Falun, as they knew I practiced Tai Chi. It was the principle Zhen-Shan-Ren [Truthfulness-Compassion-Forbearance] that really woke me up. It dawned on me that this was the ultimate truth. I was then fortunate to attend Master Li’s lecture [Master Li Hongzhi, the founder of Falun Gong] in Sydney in May 1999. I had found the teacher from the northeast of China.

“I stopped practicing Tai Chi and started the journey of cultivation in Falun Dafa. It was a profound step into a deeper exploration of myself, what it is to be a human being and finding a connection to the universe.”

Ever since the Chinese Communist Party launched the persecution of innocent Falun Gong practitioners in China, Mr. Deller has never stopped calling for an end to the brutality. Chinese tourists at Sydney Opera House often take pictures of him to take back to China.

Though Mr. Deller doesn't speak Chinese, he greets every Chinese visitor with smile and a friendly nod. He seems to communicate well with them without any words, because his heart speaks to them: “I'm here for you!” Day after day, John compassionately awakens Chinese people's conscience with his display board:

I am a Westerner who studied Tai Chi, Kung Fu and Taoist meditation since 1979,

Travelled through China in 1986, went to Shaolin temple,

So fortunate to learn Falun Dafa in 1999,

So sad to see Chinese who treasure Zhen Shan Ren are tortured and killed.

For thousands of years Chinese civilization understood man is connected to the universe,

That the purpose of this life is to learn how to return to our true self and true homes,

To live life here in accord with higher principles, not to live selfishly, without compassion,

You are part of China’s heritage, you are living Chinese today,

Please awaken, cherish what is in front of you!”