That day, Master took a plane from Beijing to Changsha, and two Chenzhou practitioners traveled to Changsha to welcome Him. Master arrived in Chenzhou at around 11 a.m.

“Chenzhou Sports Base” was selected as the class venue and the podium was decorated very beautifully with a banner reading, “Falun Dafa Class in Chenzhou.” A Falun emblem was hanging at the top.

“Oh how many the years, looking for the master,Finally the day has arrived to meet him.”(“Destined Return for the Holy Fruition” in Hong Yin)

The class started at 2 p.m., and the practitioners who were outside the venue gave a warm welcome. The feeling of our happiness could not be expressed in words. 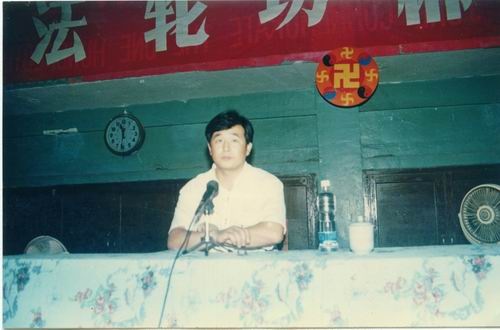 Revered Master Li Hongzhi came to Chenzhou to teach the Fa on July 15, 1994

After introducing Himself, Master went into the main topic – teaching the Fa of genuinely guiding people toward higher levels. So that practitioners could understand easily, Master used very plain and straightforward language to explain and illustrate examples.

When Master taught the Fa about Truthfulness-Compassion-Forbearance, the confusion and the many years of knots and distress I had accumulated were unlocked and resolved. I was overjoyed, and a bright road of cultivation lay ahead.

Throughout those days, Master continued to eliminate karma for me. I had hematochezia every day and woke up nine times during the night. I was aching all over and even my bones hurt. Regardless of how uncomfortable I was, I was brimming with confidence and thanked Master for saving me. I knew that I was changing fundamentally from the inside out.

Master said,“The cause of your illness has been removed, and what remains is only this bit of black qi that will come out on its own to let you suffer some and have some pain. It is forbidden for you not to suffer even a little bit.” (Lecture Two)

“...almost everyone is born with karma built upon karma, and everyone’s body has quite a lot of karma.” (Lecture Four)

“When your body is seen from another dimension, the bones are all black.”(Lecture Two in Zhuan Falun)

Without my being aware, my protrusion of the lumbar intervertebral discs became flat, and the silicosis and rheumatoid arthritis also vanished after Master cleansed my body. Master saved my life.

For the first time in my life, I relaxed and was truly happy after I practiced Dafa.

My father has three brothers. My second aunt (uncle's wife) wanted to seize the land that my father had obtained from the ancestors and so she made a lot of plans.

My father was sent to be a soldier not long after I was born. My second aunt burned incense every day, cursing my father never to return. Not long later, my father really died a tragic death in a foreign land.

My mother remarried and I became an orphan, living with my grandmother. My first uncle adopted me when I was seven. My uncle was disabled and the family lived in poverty. So, I did many things such as grazing the cattle and cutting wood for them.

When I was nine years old, I was completely bald and I was also dying from malaria. Fortunately, my cousin, my first uncle's son sent me for treatment and I was cured. He even sent me to school for two years. Later, my cousin owned my family's land and house.

I hated my second aunt to the core and was determined to avenge my father. I did not give up on this idea for many years.

After I began practicing Falun Dafa, I finally understood that all these things have karmic connections. Lifetime after lifetime, resentment and gratitude are karmic retribution. We do not know who owed who and there are also those that we need to pay with our lives. I let go of the resentment and hatred of injustice, which relieved the heavy psychological burden that had plagued me throughout my life. I'm so grateful to Master for freeing me from this abyss.

Seeing the Greatness in Subtleties

It was very hard on Master to teach the Fa, as the schedule was tight. The classes were arranged in chronological order. Usually, Master would take a train or plane immediately to the next city after a class has finished, and most of the time he was rushing through the night. Those days and nights that Master was teaching the Fa all over the country were spent either in classes or on the road.

Master was always responsible to the students and society, and He thoughtfully considered every detail. Due to the situation in Chenzhou, revered Master had the staff members send a message before the Chenzhou class, “The transportation in Chenzhou is inconvenient and there are no buses. If many students from other provinces come, they may not be able to reach home in time and will also cause problems for the locals.” As a result, many practitioners who wanted to go to Chenzhou did not go in the end.

Even though this was announced earlier, practitioners from 9 provinces still came – a total of 924 people, while there were only 300 plus local Chenzhou practitioners.

For four days Master taught the Fa to students and He worked overtime. It was very hard. Besides giving lectures during the day, Master showed students the exercise movements at night and He had no time to rest.

During this period, students kept asking to have a meal with, discuss and take a photo with Master. Master agreed to all their requests. When posing for pictures, some students wanted to stand beside Master, so they pushed and shoved. However, Master treated this with a peaceful attitude. Master's demeanor and kindness deeply influenced everyone around him.

Speaking of meals, the dishes were home cooked. It is not that students wanted to have a good meal, but they wanted to stay longer with Master. The cafeteria workers were afraid that there was not enough to eat and carried a plate of noodles over. Master kept thanking them and said, “That's too troublesome for you.”

Master tidied the room that he was staying in every day, and kept it clean and neat. The attendants were very moved, “A big qigong Master is so approachable and thinks of others. It's so rare.” Everyone who met Him felt Master is compassionate.

Master and twelve students went to Suxianling one day. Master told the students earnestly, “I hope that everyone will cultivate well and persist in cultivation. Cultivate yourself well. It is difficult to obtain the Fa!”

Before Master left Chenzhou, he refunded every student 20 yuan of the fees. At first the staff members did not understand. Qigong masters usually want to collect as much money as possible and increased the fees from a dozen to several hundred yuan. Master worked overtime, yet he reduced the fees. Thus, we felt that Master was unusual.

In accordance with Master's wishes, the staff members received less money from the students. The money that was left was very little. After giving some of the money to the local Qigong Association, nothing was left.

The Falun Dafa class in Chenzhou ended in the afternoon of July 18. Around 7 p.m., Master went to the railway station with the students from Guangzhou. We rushed to see them off. Master came to meet us and went to the waiting room afterwards.

A while later, the waiting room staff brought a large watermelon and said, “Your Master gave you this.” Our feelings at that moment could not be described in words. The watermelon was cut. We did not know how many people went to send Master off, but there were enough slices for everyone. There were many people on the train and we saw Master standing at the junction of the two cars. The train left and we looked towards Master's direction. We were reluctant to leave as we wanted to see Master one more time.

After Master brought Falun Dafa to Chenzhou, Dafa soon took root there and developed rapidly. Within two years, there were 41 practice sites in the city. The number of practitioners increased from 300 to more than 30,000. People had a new outlook on life and did an endless stream of good deeds. 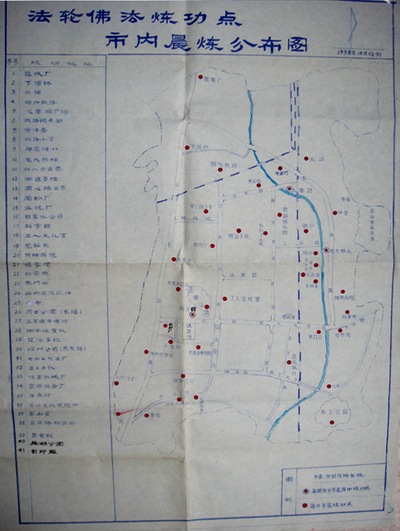 Forty one practice sites in the city

Initially, there was no tape player at the practice sites. The coordinator suggested that every practitioner scrape money together to buy one. Later, they realized that Master said not to raise funds among practitioners, so they decided to return the more than one thousand yuan collected. Practitioners did not know each other and it was troublesome to return the money. However, everyone used the high standards of Dafa to conduct themselves. Nobody took more money than they gave and the return process was very smooth.

One hot summer afternoon a female practitioner picked up a bag which contained thousands of yuan. She thought, “The person who lost this money must be very worried.” So, she stood there, waiting for the rightful owner to return. It was very hot. Twenty minutes passed and there was still no one in sight.

When 30 minutes had passed, a man riding a motorcycle came and he looked very anxious. The practitioner learned that he brought 68,000 yuan to the bank to deposit, but only realized that the money was lost when he reached the bank.

When the practitioner returned the money to him, he was grateful and took out 200 yuan to thank her. The practitioner would not accept it and said, “I practice Falun Gong. If you remember 'Falun Dafa is good' that will be sufficient thanks.” The man told the bank staff when he went to deposit the money, “I found the money. It was a person that practices a qigong that picked it up.” The bank staff said, “Yes, it must be a person that practices Falun Gong.” He said, “Yes, yes. She said she practices Falun Gong.”

Actually, the practitioner who had picked up the money was having financial difficulties. The companies that the couple worked for had both closed down and their child was studying in college. The couple relied on odd jobs to support themselves. The husband was arrested repeatedly, the home was ransacked, the couple was fined and robbed by the police because he practices Falun Gong.

Wonderful View of the Practice Site

“Our exercise sites are better than any other qigong exercise sites. As long as you go to our exercise sites for practice, it is much better than your treating your own illness. My fashen sit in a circle, and above the exercise site is a shield on which there is a big Falun. A large fashen guards the site above the shield. This site is not an ordinary site, and neither is it a site for an ordinary qigong practice: It is a site for cultivation practice. Many of our practitioners with supernormal abilities have seen that this Falun Dafa site is shielded with red light, and it is red all over.” (Lecture Three in Zhuan Falun)

The wonderful scenes that Master spoke about were also seen by some people at our place. 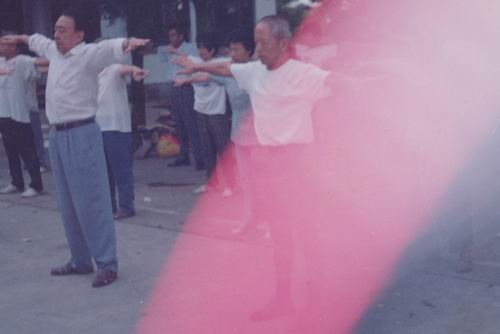 A mystical beam was photographed while Chenzhou practitioners were practicing

Before 1999, a soldier from Beijing was traveling to Chenzhou. While he was taking a morning walk he saw that in front of him, the ground all the way up to the sky was all red. He later learned that it was the practice site of Dafa disciples. He postponed his return trip to Beijing by three days to study the Fa and do the exercises in Chenzhou. He also said that he would teach others when he returned home.

“Glasgow, Scotland: Exposing the Persecution of Falun Gong at the 2014 Commonwealth Games (Photos)”