(Minghui.org) On August 24, the Falun Dafa Cultivation Experience Sharing Conference in Queensland, Australia, was held at the Sunnybank Community Hall in Brisbane. Nine practitioners shared their experiences of cultivating, looking inside, and clarifying the truth. 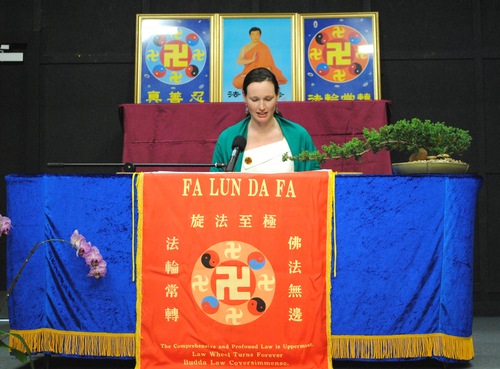 A practitioner shares her experiences and insights at the conference 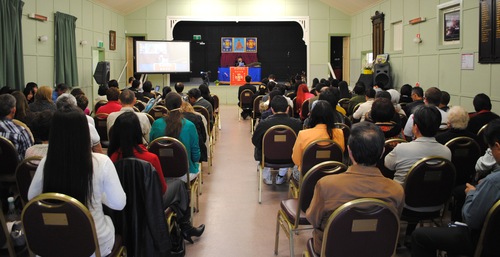 Over the past year, Annie Zhao has convinced almost 5,000 Chinese people to quit the communist party and its associated organizations. In her sharing Annie said, “During this process I have realized that compassion and righteous thought are the keys. I often ask myself whether I really have sentient beings in my heart, and try my best.”

“Only solid cultivation can give me strong righteous thoughts,” Annie said. “If we really devote our hearts to it, the power of Dafa can help us to save people.”

Annie came to Australia from China not long ago. She cherishes the cultivation environment in the free society of Australia. Every day she goes to the local tourist spot to talk to Chinese people about Falun Gong.

“When my xinxing is improved, I can convince more people to quit the party,” Annie shared. “I often run into all kinds of people. Some are supportive and some curse at me. In this process, I have found many attachments of mine. Then I try my best to get rid of them. I try not to be moved by any negative attitudes from the tourists. When I am able to maintain and improve my xinxing, I can do a better job clarifying the truth to people.”

Hank Chen also shared his experiences of reaching out to Chinese people and telling them about Falun Gong, and convincing them to quit the party.

Hank shared, “One day, a fellow practitioner asked me if I was wealthy. I was having financial difficulties back then, so I said 'not really.' The practitioner told me that I was wrong. 'Think about all the sentient beings you have saved,' he said. 'There are numerous beings behind each of them, and they are all saved because of you. Your world in the future will be really rich.'

In his presentation, Xie Weiguo reviewed his journey of cultivation. Mr. Xie was a student at Tsinghua University, the best college in China. He was fortunate to participate the Oriental Health Expo in 1992 and 1993 as a student representative, where he talked to Master Li Hongzhi, the founder of Falun Gong, and started practicing Falun Gong.

Falun Gong soon healed his insomnia and stomach pain, and helped him to be efficient in his studies. He won several special fellowships and his achievements were written about in the campus journal New Tsinghua, with his photo on the cover.

After the persecution of Falun Gong started, Mr. Xie went to Tiananmen Square to appeal for Falun Gong twice, and was arrested twice. Later he went to England to finish his education. Because he practiced Falun Gong, the Chinese Embassy refused to renew his passport, and Mr. Xie was a stateless person for seven years until becoming a British citizen in 2011.

Mr. Xie then shared several stories from his cultivation journey. “Master Li has guided and watched over me on my journey of cultivation,” he said at the end of his presentation, “I cannot express my gratitude in words.”

The Miracles Manifest through the Fa

Ziyin had gallstones before she started practicing Falun Gong. The gallstones had disappeared after she began practicing, but in the past year, the problem seemed to have come back to bother her again three times. Every time, Ziyin was able to gain some enlightenment from the experience. With solid belief in Master Li and the Fa, Ziyin struggled through the tribulation.

“During the tribulation, I realized that everything in the human world is illusion. As a cultivator, all the tribulations are actually good things, for they are tests. We can improve ourselves if we pass the test. Each time, I was not moved by the tribulation. With solid belief in Master Li, I successfully passed the test.”

Gege was a frail child since she was very small, and often had to be hospitalized. She had tried all kinds of Western and Chinese healing methods, but none of them could help her improve her health.

One day she thought of Falun Gong, which somebody told her about when she was young. She found Zhuan Falun online and finish the book in three hours. The teachings in the book fundamentally changed Gege's view of life. After reading it, she felt better physically.

The next day, Gege had a conflict with some people. She remembered what Master Li said in the book, and treated the conflict as a cultivator. She was surprised to find that her physical discomfort was all gone after that. Just like that, she started her journey of cultivation.

Studying the Fa Helps to Break through Illusion and Interference

David Yu shared his understanding of studying the Fa.

“Through Fa study, I realized why I sometimes slack off in cultivation. There are two reasons. First, I have poor enlightenment quality, so that I don't cherish the opportunity of cultivation. Second, because I don't read the Fa enough, I have too many human notions.

“We are deluded by the ordinary human world. If we don't read the Fa intensively, how can we cultivate without the guidance of the Fa? How can we break through all the illusions, and give up the attachment without the Fa?

Laura Douglas, a Western practitioner, also shared her understanding of Fa-study. She was not diligent a while ago, and was immersed in everyday life. She ran into a series of tribulations and interference. Later, her son's words woke her up. In her sharing, Laura talked about how she has been trying to catch up.

The film The Eternal Story was shown, prior to the conference being brought to a successful conclusion.

“Introducing Falun Gong at a Major Exhibition in Las Vegas”