(Minghui.org) The 2014 UK Falun Dafa Experience Sharing Conference was held on August 24, 2014 at the Columbia Hotel near Hyde Park, London. Twenty practitioners shared experiences in clarifying the facts about Falun Gong to the world's people, particularly those who have been deceived by the Chinese regime's propaganda. 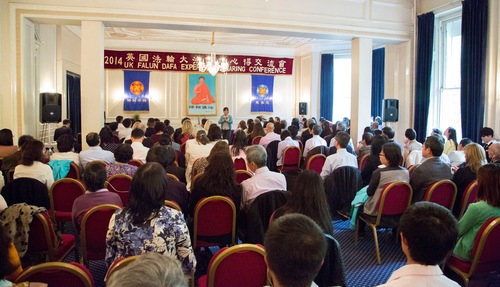 A large picture of the founder of Falun Gong hung in front of the conference room, and on the back wall were two banners. One of them read:

“Compassion can harmonize Heaven and Earth, ushering in springRighteous thoughts can save the people in this world”(from “The Fa Rectifies the Cosmos” in Hong Yin Vol. II)

and the other read:

“Pause for a moment of self-reflection,and increase your righteous thoughtsThoroughly analyze your shortcomings,and progress with renewed diligence”(from “Rational and Awake” in Hong Yin Vol. II) 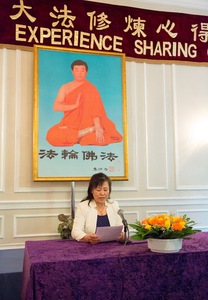 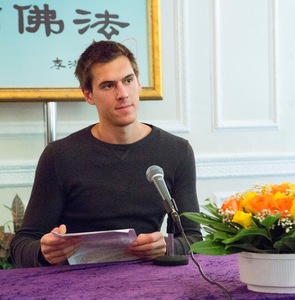 Falun Gong practitioners share their experience in their practice

Shanyuan lives in northern England. She has been clarifying the facts to Chinese people and helping them quit the Chinese Communist Party (CCP) and its affiliated organizations since 2005, and this has become part of her life. “There is only compassion and no human attachments when I help people understand the facts,” said Shanyuan.

Maggie from London has been exposing the persecution of Falun Gong and helping Chinese people quit the CCP for the past six months. She said that it's very important to stay calm and have compassion when talking to people.

“No matter what others say or what their attitude is, never become emotional. If you become emotional, you can’t effectively clarify the facts and save people. Now I am able to stay calm and compassionate when I talk to people in Chinatown.”

“I have a smile on my face when I hand out a flier, whether or not the other person accepts it. Oftentimes, those who wouldn’t take the flier initially changed their minds after seeing a smile. I believe that it is my compassion that dissolved the evil that tried to interfere. The results of clarifying the facts are much better when I have a pure and compassionate heart.”

For six years, Ms. Zhou Fengling from Cambridge has been making phone calls to China in the morning and going out to talk to tourists every afternoon.

“I often feel that other practitioners are able to talk with a very kind and mild tone. I think they are able to do so because they have a pure and righteous mind, which allows them to awaken more people. I found my shortcoming. I have the attachment of competing and a narrow mind that prevents me from appreciating others. As I continue to let go of my attachments and notions, my compassion emerges. I am now able to treat everyone I meet kindly and more effectively reach people.”

In the past three months, Denise from Edinburgh, Scotland went to the Edinburgh Castle and Royal Mile every Saturday to clarify the facts and help people quit the CCP and its affiliates. In the process, she realized that she must put in the effort and be serious about saving people from the consequences of the CCP's lies. When she talks to tourists about Falun Gong, she is always calm and compassionate.

Ms. Lanrong from Birmingham has been calling people in China to clarify the facts for years. Recently she shared experiences with practitioners in a Fa study group. She realized that time waits for no one and it is urgent to rescue more people in the limited time. She began to go to tourist attractions such as William Shakespeare’s birthplace in Stratford-Upon-Avon.

Ms. Caroline Yates was in charge of communicating with the theater staff for the 2014 Shen Yun performance. She said that whenever she became attached to a notion, the coordination work would be interrupted somehow.

“I must stay clearheaded and my thoughts have to be based on the Fa at every moment,” said Caroline. She also said that she understood that the Fa must be a part of her, and be in her mind and heart every moment before she can stop having human notions. As soon as she wakes up in the morning, she recites Lunyu. She recites from Zhuan Falun, Lunyu and Hong Yin whenever she can. When an attachment emerges, she tries to identify it and replace it with the Fa she's reciting. When she interacts with people, she reminds herself that she is saving people instead of simply carrying out a task. When she emails or makes phone calls, she bears in mind how much she wants to save the person on the receiving end.

Shu Rong is the Shen Yun promotion coordinator in the Cambridge area. She believes that it is a practitioner’s honor to be able to promote Shen Yun. “With infinite compassion and great suffering, Master gives us the opportunity to save people. This opportunity will slip by quickly and never come back. We must promote Shen Yun with our purest and most respectful mind. Any impurity in our minds will have a negative effect on promoting Shen Yun.”

Mr. Ian Lynch from Birmingham learned Falun Dafa in 2007 when he was a student at Dublin University. He stopped practicing for a while until 2013. In the process of studying the Fa, clarifying the facts, and sending righteous thoughts, Mr. Lynch realized that it's a precious opportunity and an honor to practice Falun Dafa.

He said that through talking to other practitioners, he realized that he often ignored his problems instead of seizing the opportunity to look within and solve the problems fundamentally. When he looked inside, he realized that his motive for cultivating was selfish; it was to reach Consummation only. He hadn't placed Falun Dafa nor the sentient beings he represented foremost. He then changed his focus and became determined to place the Fa first and assimilate to it.

A year ago Mr. Stefanos Matrakoukas from Leeds began to practice Falun Dafa. He experienced interference from sickness karma and financial troubles. Through studying the Fa and diligently cultivating his character he passed these tests. He says that the more he studies the Fa and does the exercises, the more he understands. He treats himself as a Falun Dafa practitioner in everything he does and asks himself if what he does conforms to the highest law of the universe. He looks within to find where he falls short. He says that no matter what happens, he will continue to keep a positive attitude and confidence in the practice.

Mr. Stuart Liess has only practiced Falun Dafa for a year and was surprised by the tremendous changes he experienced. The first time he protested and sent righteous thoughts with other practitioners in front of the Chinese Consulate, he said that he felt enormous energy. He had a strong feeling that divine beings were watching. After he sat with his legs double crossed in the lotus position for an hour, his legs hurt. He remembered thinking that the pain he experienced was so insignificant compared to that suffered by the tens of thousands of practitioners imprisoned and tortured in China. He should not complain about the pain he suffers or even the troubles he come a across in his daily life.

The conference concluded in the evening and Dr. Liu, representative of the UK Falun Dafa Association, said that the conference would surely inspire attendees to form a stronger one body and that this “will allow us to continue to fulfill the mission and the vows we made to save sentient beings.”

“Practitioner Suspected to Have Died from Organ Harvesting Ten Years Ago”

“Bakery Owner Brutally Tortured in a Detention Center: “I Didn't Think I Would Come Home Alive””