Growing Up with the Guidance of Falun Dafa: A Young Swedish Man's Journey

(Minghui.org) Thomas Pompe developed a love for Chinese martial arts and Chinese culture at a young age. Martial arts was an expensive hobby in Sweden, but his parents felt it was worth it for him to follow his passion. They even took him on a tour of China when he was just 13 years old.

The Pompe family has lived in Gothenburg for many years. The family has two children, Thomas and his older sister.

At only 14 years old, Thomas found the martial arts he had learned were limited to movements and lacked any spiritual advancement. The qigong exercises cost a lot of money to learn and the energy he felt while practicing them was very little.

He felt he had reached a dead end, and didn't see how he could go any further. He had too many unanswered questions from a spiritual perspective.

Then at a Health Expo in Sweden in 1998, Mrs. Pompe saw people practicing a peaceful exercise from China. She bought a copy of the book Zhuan Falun in the Swedish language for her son Thomas, and she knew he would love it. 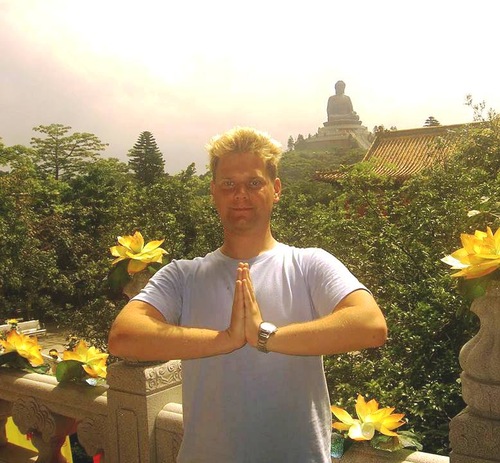 “It was a wonderful feeling that I can't use human language to express,” Thomas said. “A lot of questions were answered in the book. I was extremely happy the whole summer.”

He quickly read through the book. He later found the Falun Dafa booth at a health expo and saw the exercise demonstration. He learned the exercises on site.

Since he had practiced martial arts for years, the exercises were quite easy for him. Even though the movements were slow and gentle, he felt a very strong energy. After the expo, he joined the local Falun Dafa exercise group.

The book Zhuan Falun has now accompanied him for 16 years, as young Thomas grew into to a young adult.

“Falun Dafa is incredibly good. It has had many positive impacts on my life,” Thomas shared. “Compared to other exercises, Falun Dafa cultivates both mind and body, and both are important. This is a true cultivation practice.”

While other teenagers became addicted to alcohol or drugs, his parents didn't have to worry about him. While other young people wore outlandish clothing and rebelled against tradition in other ways, Mr. and Mrs. Pompe were pleased to see their son so earnestly building his character through his cultivation of Falun Dafa.

Thomas felt lucky to start practicing Falun Dafa so early in his life. Falun Dafa was first introduced to the public in 1992 in China. Master Li Hongzhi began to teach Falun Dafa abroad in 1995. The first overseas lecture was in France, with following two lectures in Gothenburg and Stockholm, Sweden. Thomas took up the practice in 1998.

“To me, practicing Falun Dafa is the way to improve mind and body. The key to cultivation practice is to look inward, and change one's own heart. When running into conflicts a Falun Dafa cultivator would not ask others or the environment to change. When we find and fix our own problems, other people and the environment will change accordingly,” Thomas said.

Standing Up Against the Persecution

A year after Thomas started his cultivation, the Chinese Communist Party (CCP) started persecuting Falun Dafa (in July 1999). China's state-controlled media spread hate propaganda that defamed Falun Dafa. At that time, Falun Dafa was little known in the west, so western media relayed everything from China. In a short period of time, the world's media unintentionally spread the communist regime's propaganda.

Thomas has been to many countries to raise awareness about the persecution. Whenever high ranking communist officials visited a western country, Thomas and other practitioners would go there to peacefully protest the persecution of Falun Dafa.

“I experienced a lot during those early years after the persecution started. I knew the culprit was Jiang Zemin, who launched the persecution. We went to the cities they visited and raised banners to let people know the truth,” Thomas said.

“I knew Luo Gan was another culprit. I saw him when he was visiting Finland. I looked at him and his companions. They looked at us too. I saw surprise in their eyes. They probably didn't expect to see so many Falun Dafa practitioners overseas. We demonstrated the Falun Dafa exercises. We were warning them that the whole world was watching their actions.'”

In February 2003, his parents again gave him a special gift, a plane ticket to Hong Kong. With the support from his family, Thomas attended the Falun Dafa Cultivation Experience Sharing Conference there.

At a tourist site in Hong Kong, Thomas passed out fliers about Falun Dafa to Chinese tourists. Their expressions were mixed with surprise and doubt. He didn't understand what they were saying, but from their doubtful eyes, he understood that he must show the Chinese people that westerners also love Falun Dafa and that Falun Dafa is good.

In July 2003, Thomas and more than 5000 Falun Dafa practitioners attended an experience sharing conference in Washington DC. He saw Master Li Hongzhi in person for the first time.

Since he started practicing Falun Dafa at the age of 14, Thomas has witnessed different phases of Falun Dafa spreading to the world. After 16 years of cultivation practice, he is now a 30-year-old young professional.

“Sometimes in a dream, someone would provoke me with rude language and I would fight back. Immediately, I realized it was wrong and felt regret. 'No, I should not fight back.' Then I woke up and felt lucky it was only a dream.”

Gradually, he learned to discipline himself in his dreams too. Thomas now follows the principles of Truthfulness-Compassion-Forbearance in his life and in his dreams.

“Podcast (Health): “Relief from Spondylitis and Other Difficult to Treat Illnesses””