(Minghui.org) After Lieutenant Colonel Mr. Zhou Jinba retired from the Tibet Military Area Command, he returned to Pengzhou, Sichuan Province. Xie, a staff member at the comprehensive administration office in Zhihe Township was constantly monitoring Mr. Zhou’s home, and he arranged for different people in the area to spy on him.

Mr. Zhou was illegally arrested and his house was ransacked four times in the past two years. Several Falun Gong books, truth clarification materials, pictures of the founder of Falun Gong, computers, cell phones and a 10,000 yuan gold necklace was confiscated. He appealed many times with no results.

Qiao Lijun from the 610 Office told him that the Pengzhou City 610 Office tried to work with Xigaze Political and Legal Committee of Tibet to get him out of Pengzhou.

Arrested Twice Within Four Days and Currently Under House Arrest

The head of Xigaze Political and Legal Committee of Tibet, head of Domestic Security Division and the head of the Comprehensive Administration Office along with Luo, head of Pengzhou City Domestic Security Division, Ji Huitian from Zhihe Township 610 Office and over a dozen police officers from Guangming Police Department attempted to break into Mr. Zhou’s house on July 29, 2014. Mr. Zhou refused to open the door.

After attempting to break in for over an hour, the police broke through Mr. Zhou's anti-theft door. They took away two books of Zhuan Falunand two laptop computers. They arrested Mr. Zhou and took him to the Guangming Police Department.

Luo, head of Domestic Security Division, used a book and his hands to slap Mr. Zhou and kicked and beat him. Luo, Qiao Lijun from the 610 Office and two others from the Guangming Police Department stepped on the picture of the founder of Falun Gong.

Luo and Qiao Lijun threatened Mr. Zhou, “If you expose this on the Minghui website, we will come after you.” At 6:00 p.m., Mr. Zhou returned home. 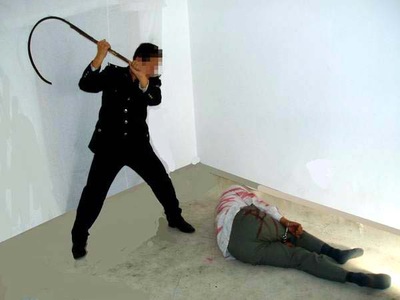 Mr. Zhou was arrested again on the morning of August 1 by Qiao Lijun from the 610 Office, Luo from the Domestic Security Division, and officers from the Guangming Police Department.

After they saw the article Mr. Zhou was writing to expose their crimes, Luo went on a rampage and brutally beat him. Luo used his belt to hit Mr. Zhou’s head, face and body. He again threatened him, “If this is published on the Minghui website, we will retaliate.” Mr. Zhou said, “I will expose you for sure.” They beat him again and broke his new 5300 yuan cell phone.

Mr. Zhou was placed under house arrest on August 2. The gate of his residential area was watched by perpetrators from the comprehensive administration office. Any cars going in or out were videotaped, and everyone's IDs were checked.

Mr. Zhou was arrested by the Pengzhou City Domestic Security Division personnel, 610 Office of Zhihe Township staff and officers from Guangming Police Department on April 22, 2014. His house was ransacked. That night, he was taken to the Pengzhou City Detention Center for 15 days. He returned home on May 7.

Mr. Zhou was pushed down to the ground and handcuffed by three police officers on March 26, 2013 when he was clarifying the truth on the streets. He was taken to the Guangming Police Department. Ten people including Zhou Yingqi, head of the Domestic Security Division and other perpetrators from the 610 Office ransacked his house. That night, he was sent to the Pengzhou City Detention Center for 15 days. He returned home on April 10.

About seven to eight perpetrators including Zhou Yingqi, Qiao Lijun, Ji Huitian, Gao Yuan from Xigaze District Human Resources Bureau attempted to arrest Mr. Zhou from his home but were not successful. In frustration they ransacked his house and took away Falun Gong materials and a gold necklace worth more than 10,000 yuan.

Mr. Zhou used to suffer from multiple diseases. He was transferred to Xigaze, Tibet Military Area Command in 1993. After living in a high elevation area for a long time, he developed illnesses and his lungs became enlarged. He was hospitalized multiple times but his condition did not improve. After he practiced Falun Gong, he became healthy both physically and mentally.

“Xi'an Police Tell Family, "We Don't Need a Reason to Arrest You!"”