(Minghui.org) The Chinese people had a high respect for their elderly in ancient times. Yet in today’s China, arrests and sentencing of the elderly for their spiritual practice is not uncommon under the communist rule.

In the State of Qi during the Spring and Autumn and Warring States Period (770 BC – 221 BC), the sons of anyone who was over 70 years old were exempt from paying taxes and from performing military and other services to the state. This policy enabled them to have enough time and finances to attend to their aging parents. During the Han Dynasty (202 BC – 220 AD), those who failed to take care of their elderly parents could be punished by death.

Contrary to the traditional practice of providing them extra respect and care, elderly Falun Gong practitioners are not exempt from being the target of persecution, only because they believe in a peaceful practice that the Chinese Communist Party (CCP) considers as a threat. 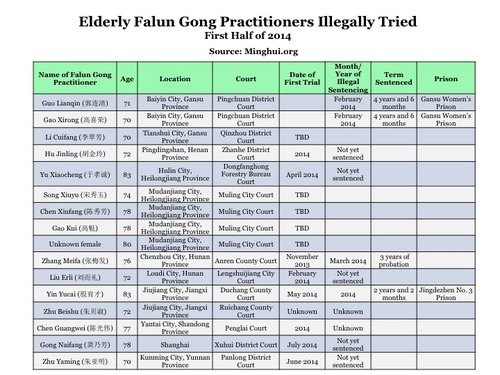 83-Year-Old Man Imprisoned for More Than a Decade

Mr. Yin Yucai, 83, a former presiding judge of the Duchang County Criminal Court, had been illegally sentenced to forced labor and prison for a total of 11 years. While he was incarcerated at the Yuzhang Prison, he was secretly fed unknown drugs, which caused a mental disorder for a period of time. 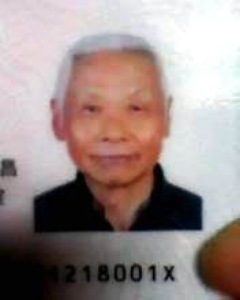 Mr. Yin was again arrested on January 13, 2014 in Xubu Township for distributing Falun Gong informational materials. On February 10, his family visited the domestic security division in Duchang County and asked for his release. Responding to the family's plea citing Mr. Yin's age, the head of domestic security yelled, “He will be imprisoned even if he's 95!”

Mr. Yin was subsequently tried at the Duchang County Court on May 21, and sentenced to three years and two months in prison. Mr. Yin was taken to the Jingdezhen No. 3 Prison on June 24.

Ms. Gao Xirong and Ms. Guo Lianqing, both in their 70s, from Baiyin City, Gansu Province, were arrested for practicing Falun Gong on February 8 and 13, 2014. Only a few days later, they were each sentenced to four and a half years and transferred to the Gansu Women's Prison on February 28.

Coerced to Dismiss the Attorney

Chinese authorities also intimidate these elderly practitioners and their families to keep them from hiring defense lawyers. For instance, the daughter of 72-year-old Ms. Hu Jinling was coerced into dismissing the attorney from Beijing and accepting the one appointed by the court.

On the day of the trial, the court forced the attorney into a conference room on the fourth floor, while keeping Ms. Hu in a temporary detention room on the second floor. Therefore, Ms. Hu wasn't able to meet with her lawyer.