Raising Awareness in Northern India: People from All Walks of Life Learn about Falun Gong

(Minghui.org) Varanasi, or Benaras, on the banks of the Ganges River in northern India is one of the oldest continuously-inhabited cities in the world. Varanasi is considered the holiest pilgrimage, and the belief is that submersing oneself in the Ganges will absolve a person of all sins.

A Falun Gong practitioner who lives 20 km (12.4 miles) from Varanasi in Sarnath (where Sakyamuni gave his first teachings) felt strongly that before the monsoon rains arrived in the area, it was a good time to clarify the truth to the local people, to commemorate Falun Gong's 15 years of peaceful resistance against the persecution. 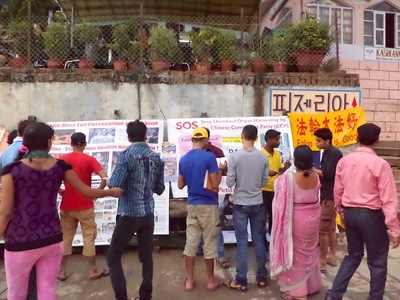 The practitioners put up informational displays on July 12, 13, and 19, 2014. The peaceful Falun Dafa music was played in the background, and a variety of banners and posters about Falun Dafa and the persecution in China were displayed.

Rain caused the events on July 12 and 13 to end earlier than planned. It rained heavily on the 19th, but the practitioners were determined to go to Assi Ghat in Varanasi, where there is always a motley crowd of gurus, spiritual men, and tourists. Suddenly, around noon it started raining heavily, with lightning and thunder, and everything instantly seemed flooded. However, after this sudden downpour the sky cleared up and people were outside in the open again.

The practitioners put up the display as soon as possible, in case there would be another round of showers. Even before the posters were all displayed, a crowd had formed around the area, and a large number of people stopped to learn about Falun Dafa for the next few hours before it started to rain again. 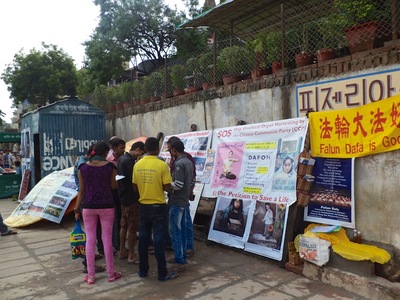 People from All Walks of Life Come to See the Displays

Despite the rains, during the three activities there was usually a constant stream of people from all walks of life who stopped to read the materials and talk to the practitioners. There were a number of students and doctors from Banares Hindu University (BHU) and other educational institutions. Others who stopped by included laborers, farmers, engineers, students, doctors, professors, disciples of various gurus, Hindu cultivation schools, boatmen, shopkeepers, and beggars. There were various "holy" men in orange, white, red, or yellow robes, for which Varanasi is so famous. There were also tourists from around the world, people of all ages, from the very young to the very old, including those who could hardly walk... Each one was curious to learn what our display was all about.

Some of these people couldn't read or write, and just by looking at the truth-clarifying banners and getting more information in Hindi (the local language of this area), they also wanted to support the effort to end the persecution.

Many of them earnestly signed the Doctors Against Forced Organ Harvesting (DAFOH) petition, calling on the Chinese Communist Party to stop its crimes of forced organ harvesting from persecuted Falun Gong practitioners. A group of young men who seemed to be mute, also listened and signed the petition.

One student took a petition form to collect signatures from his friends.

Quite a few people expressed an interested in learning the Falun Gong exercises, and others suggested holding various events in the future and having practitioners come and introduce the exercises and talk about the persecution in China. 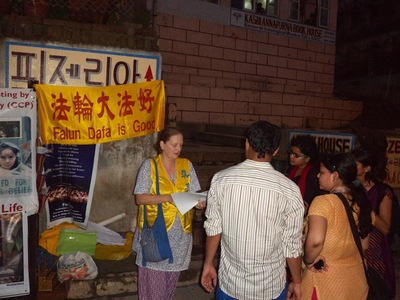 Several people, including overseas visitors, gave practitioners a thumbs up, and encouraged them to keep up the good work.