13-Year-Old Boy: I Lost Three Family Members During the Persecution

(Minghui.org) The following is a story from a 13-year-old boy, who used to have a happy family filled with love.

His grandpa was a senior engineer and his grandma was a school teacher. His dad was a university graduate who specialized in mechanics, and his mom was a graduate in accounting from Northeastern University in Shenyang. His whole family practiced Falun Gong and benefited from it.

However, during the last 15 years, his family has been through enormous hardships as they are persecuted for their belief: His dad was illegally arrested and sentenced to 10 years in prison, and he died one year after his release; his mom was sentenced to three years of forced labor when he was just over four years old; he spent the first seven years of his young life wandering from place to place; both his paternal grandparents were taken to forced labor camps for a year; his grandma and great grandma died one after another due to extreme anxiety. The following is his story: 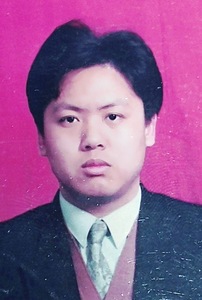 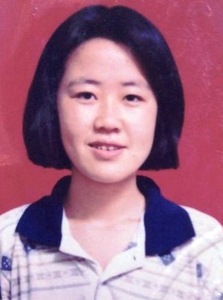 My mom He Xin 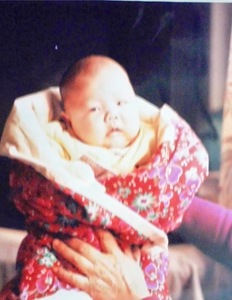 Me as a baby 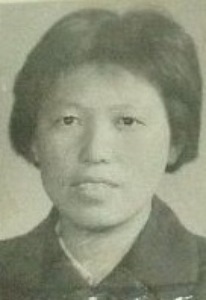 Family Turned Upside Down Before and After I Was Born

My name is Li Hongxiang, and I was born on November 21, 2000. My mom was illegally arrested nine days before I was born for hanging up a banner about Falun Gong. She was released when the police failed to find any more evidence after searching our home.

One night, the month after I was born, a group of police broke into our home and illegally arrested my dad after they found two boxes of truth-clarification materials and Falun Gong books; the police then claimed that they had caught “the key person” in Shenhe District.

The police then took my mom and me with them, as they searched and ransacked my grandma's house and arrested her. I was scared and could not stop crying. In order to avoid further persecution, my mom wrapped me up, said good bye to my great grandmother, and took me on a journey of homelessness. 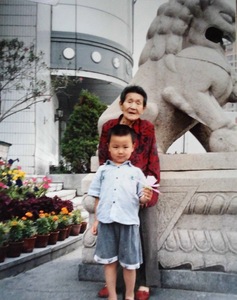 My great grandmother and I

My dad was put on trial after his arrest. A lawyer told him that Falun Gong practitioners were not allowed to enter a not-guilty plea, and that if my dad said that he would not practice Falun Gong anymore, he would be released right away; otherwise, he would receive a heavy sentence.

My dad said he could not do things against his conscience. Because he used to suffer from a severe blood condition, doctors once said they would have to amputate his leg. But since he experienced a full recovery through practicing Falun Gong, my dad said he had to be truthful and speak up for Falun Gong. As a result, he was sentenced to ten years in prison.

My dad suffered a lot and became extremely weak. The last two years before his release, he was even denied family visitation for refusing to “transform.”

On December 26, 2010, I was excited because my dad, who had been away from us for a decade, was supposed to come home. We went to pick him up, but a bunch of local police and {610 Officers}} were also there and tried to take him to a brainwashing center instead. However, because my family and our friends protested, the officers failed to take him.

I was shocked to see my that my dad looked like an old man and that his back was hunched over. He was very skinny and only had three of his front teeth left, which were so loose that they kept moving around when he talked. He was very weak, and he had to stop and squat down three times to rest on the last 50 meters of our walk home. He was no longer the same man I remembered when I had visited him as a kid, when he would always pick me up and hug me.

Now he was just very quiet and kept staring at the rest of the family all the time. When my mom asked him how he felt, he always replied, “I'm fine.” Occasionally he would say, “China is like hell on earth.”

Later my dad began running a high fever, so mom took him to the hospital for a checkup. When the doctor looked at the X-ray, he was startled: “Where is this person?” he asked. “Is he still alive?”

Mom then pointed at him where he was waiting outside the room. The doctor said, “Where has he been living? His lungs are so decayed that nothing is left, and all of his organs are bad. It's too late now. It must have been years since his lungs started to fester.”

Mom told the doctor that he had suffered ten years of persecution in prison. He had also been diagnosed with a pulmonary cavity in 2007 but received no treatment. 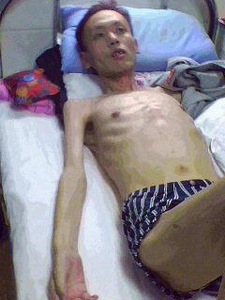 My dad at the hospital

My dad said the reason he went to hospital was to document evidence of the persecution he suffered so that those responsible would be held accountable one day. He died soon afterward on December 30, 2011.

My mom and I became homeless when I was just over a month old. First, we went to a relative's place out of town. Although one of our relatives was the head of that city's police department, they were still too scared to house us, so we left. Mom then took me to my maternal grandfather's place in the countryside, but we were still harassed. Mom did not want to cause any more trouble to my grandpa, so we left again.

Later, mom found a run-down rental house that had no locks at all. For a while, we also put up some other homeless practitioners, but we were on the move again after they were illegally arrested.

On June 24, 2005, my mom took me to visit my dad at the Wafangdian Prison. We got off the train, checked in at a local motel, and went out to have something to eat. When we got back, a policeman asked my mom if her name was He Xin, then he arrested her, saying that she was on the wanted list. The next day, police from Shenyang came to pick her up. They paid the reward money to the local police who had found my mom and drove us back to Shenyang. She was later sentenced to three years of forced labor.

Without my mom taking care of me, I lived with relatives again, moving from one place to another until she was released. When she was finally released, she had to be helped with walking out of jail, and I remember how pale and fragile she looked. Before her release, she had not been able to eat or drink for a week.

My paternal grandparents were arrested on the same day my dad was taken away. They were released the next day, but two months later they were arrested again and each sentenced to one year of forced labor.

They suffered a lot of persecution and became so weak that they could not even take care of themselves. They were later released on medical parole. But seeing that my grandparents recovered through practicing Falun Gong after their release, the forced labor camp threatened to take them back in again.

However, both my grandparents suffered relapses in health from anxiety. My grandma was very worried about my parents, especially after the forced organ harvesting of living Falun Gong practitioners was exposed in March 2006. She cried every day and became extremely anxious that my parents might have become victims. In May 2006, less than a year after my mom was arrested, my grandma died from extreme anxiety.

My great grandma was heartbroken over the death of my grandma. A great uncle of mine took her to live with his family, and after my mom was released, she often took me to visit her. Each time we saw her, she would cry and tell us how much she worried about and missed my dad—her grandson. She said she would keep going and wait to see him when he got out.

But her wish was never fulfilled. She died with great sadness and regret from not being able to see my dad once more.

I Hope the Persecution Ends Soon

It has been 15 years since the persecution of Falun Gong began in July 1999. Countless kindhearted Falun Gong practitioners and their families have been subjected to pain similar to mine, while even more citizens have been deceived by lies told by the Chinese Communist Party.

I hope that through my story, more people can learn the facts about Falun Gong, and that soon this cruel persecution will be brought to an end.