(Minghui.org) Mayor Len Pagano and the Aldermen of the City of St. Peters, Missouri, USA, issued a proclamation on July 15, 2014, calling on the U.S. Government to condemn the persecution of Falun Gong and the crime of harvesting organs in China.

The following is the text of the proclamation.

WHEREAS, Falun Gong (Falun Dafa), a traditional Chinese self cultivation practice, based on the principles of Truthfulness, Compassion, Forbearance that attracts millions of people of all ages and backgrounds and is practiced in over 100 countries over the world; and

WHEREAS, the Falun Gong practitioners who peacefully cultivate high moral qualities and experience increased health and well-being have been brutally persecuted since 1999 in China; and

WHEREAS, since 1999, when China's former president launched the “eradication” campaign against Falun Gong, hundreds of thousands of Falun Gong practitioners have been detained and tortured for their beliefs; and

WHEREAS, an independent investigation conducted by former Canadian MP, the Honorable David Kilgour and Human Rights Lawyer David Matas concluded that “there has been and continues today to be large scale organ seizures from unwilling Falun Gong practitioners”; and

WHEREAS, it is our responsibility as human beings to raise awareness necessary to stop horrific crimes against our fellow human beings no mater what the cost; and

WHEREAS, the persecution of practitioners of Falun Gong in China is an attack on the basic human rights and should not be tolerated anywhere in the world.

NOW, THEREFORE, ON BEHALF OF THE CITY OF ST. PETERS, Mayor Len Pagano and Aldermen John “Rocky” Reitmeyer, Dave Thomas, Jerry Hollingsworth, Judy Bateman, Tommy Roberts, Terri Violet, Patrick Barclay and Don Aytes call on the government of the United States to condemn the persecution against Falun Gong and the crime of harvesting organs from Falun Gong practitioners and other involuntary donors in China. 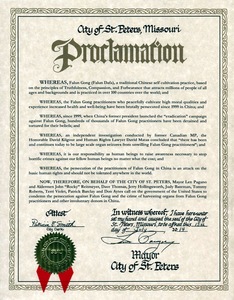 Proclamation from the City of St. Peters, Missouri

“Seoul, South Korea: “I Was Moved to Tears””

“Call for Articles for the 11th China Fahui on Minghui.org”