(Minghui.org) After sentencing Ms. Wang Lianzhen to three years in prison, the Jintai County authorities turned their attention to the rest of the practitioners illegally arrested with Ms. Wang in May 2012.

Shortly after arresting the practitioners, Domestic Security Division head Wang Cun fabricated documents to frame them. He submitted the documents twice to the Procuratorate in late 2012 and early 2014, but both times, the Procuratorate returned the cases due to insufficient evidence.

All the practitioners were released on bail approximately one month following the arrests. However, since their release on bail, they have been called to the Procuratorate for interrogation.

In June 2014, Wang Cun re-packaged the materials regarding the five practitioners – Ms. Ma Liyuan, Ms. Hao Guofang, Mr. Ma Zufu, Ms. Wan Mingfang, and Mr. Ma He – and submitted them to the Procuratorate for the third time. This time, the Procuratorate accepted the cases and turned them over to the Jingtai County Court.

On July 4, 2014, local police brought the five practitioners to court, and Judge Jin Zhao read the indictment to them.

Mr. Ma He and Mr. Ma Zufu were taken to the hospital for physical checkups before being taken to the detention center. Both of them had high blood pressure readings of 195 and 165 mm Hg, respectively. Mr. Ma Zufu was also diagnosed with heart problems, cholecystitis and gallstones.

Based on their physical condition, the doctor at the county detention center refused to accept them. They were released on probation.

The other three female practitioners, Ms. Ma Liyuan, Ms. Hao Guofang and Ms. Wan Mingfang, were taken to the Baiyin Detention Center by Wang Cun and are still detained there.

At this time, the court is preparing a trial date for the five practitioners.

At least nine practitioners were arrested around May 29, 2012. The police ransacked their homes and confiscated Falun Gong books, computers, Falun Gong-related materials, as well as other belongings.

At Mr. Ma Zufu's home, the police attempted to use a master key to open his door. Unable to break in after trying for an hour, the police kept knocking on the door until 10 p.m. In the end, they dispatched a fire truck, and by using the ladder finally broke into his home by climbing onto the apartment balcony.

All of the practitioners arrested that day were taken to the Jingtai County Police Department. They were interrogated while shackled to the tiger bench. 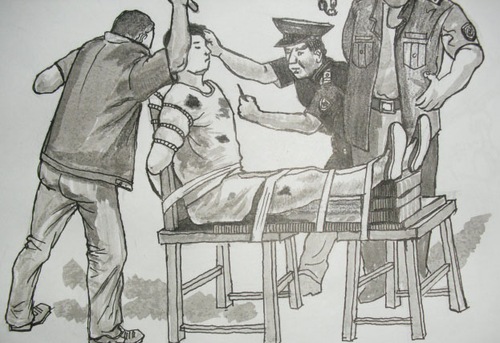 Released on Bail after One-month Detention

The next day, after a physical examination, Mr. Ma He, Mr. Ma Zufu and Mr. Yang Jianfu were taken to the Jingtai County Detention Center.

The female practitioners were detained at Baiyin Detention Center.

Ms. Ma Liyuan was released on bail a few days after her arrest due to high blood pressure. Her son-in-law was extorted for 5,000 yuan as bail money.

The other practitioners were detained for about one month and released on bail. Mr. Ma Zufu and Ms. Hao Guofang were both extorted for 2,000 yuan as bail money.

Mr. Ma He stayed away from home after he was released, in order to avoid being arrested again. He returned home on January 5, 2014.

Mr. Ma was only able to be with his family for five days before he was arrested once again at home on January 10 by Wang Cun and two other police officers. He was again taken to the Jingtai County Police Department, shackled to the tiger bench and interrogated.

Mr. Ma was taken to the hospital for a physical examination on January 11 and his systolic blood pressure was found to be 180 mm Hg. The police detained him at the Jingtai County Detention Center for 53 days.

Under orders by the guards, inmates harshly beat Mr. Ma and severely injured his ribs. He requested a checkup at the hospital, but the guards ignored his request. 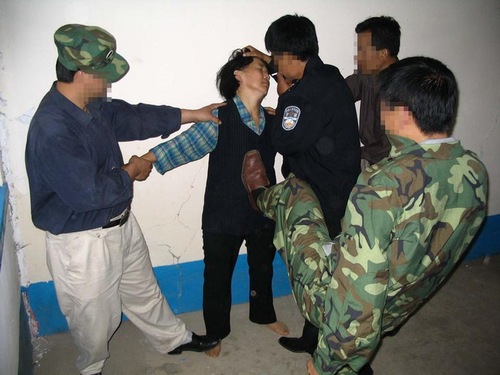 While Mr. Ma was at the detention center, he was interrogated by Wang Cun five times and by the Procuratorate once.

When Mr. Ma was finally taken to the hospital for a physical checkup on March 1, his systolic blood pressure was 210 mm Hg. The police handcuffed him to the bed while he was given an infusion.

Afraid of being held responsible for Mr. Ma's condition, the detention center and Wang Cun contacted his family and told them to take him back home on bail.