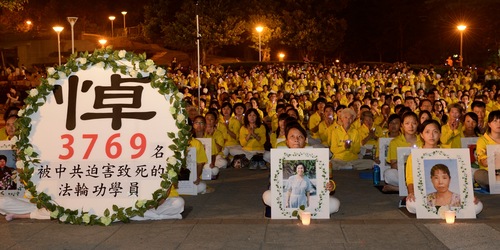 Falun Gong practitioners from central Taiwan gathered in Wenxin Forest Park in downtown on the afternoon of July 20. They demonstrated the exercises, held posters, distributed information materials, and held a candlelight vigil. 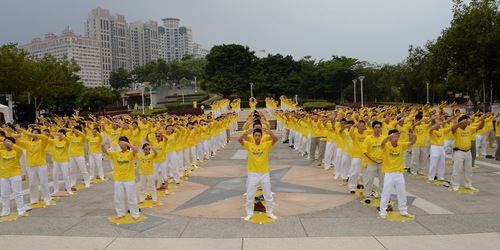 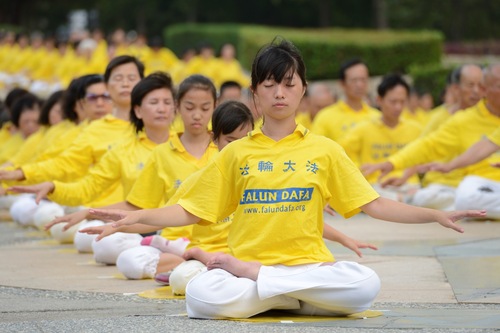 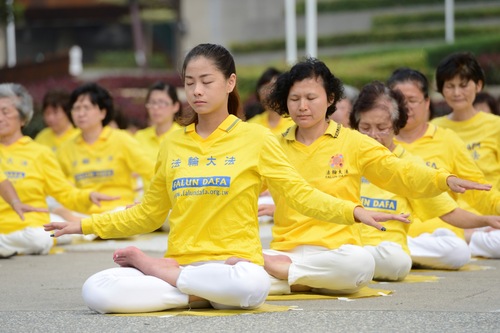 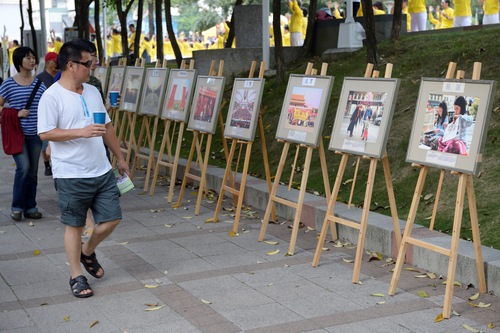 Falun Gong poster boards explain the practice and the persecution.

The rally started at 6 p.m. in Hualian. After practitioners demonstrated the five exercises, Hualian County Branch Chairman Jiang Shujun of the Democratic Progressive Party (DPP), Convener Guo Ying-yi of the DPP Council, Secretary Wang Sen-yuan of Hualian City Hall, Hualian County Branch Chairman Cai Chi-ta of the Nationalist Party, and other local dignitaries showed up to support the event and condemn the persecution. 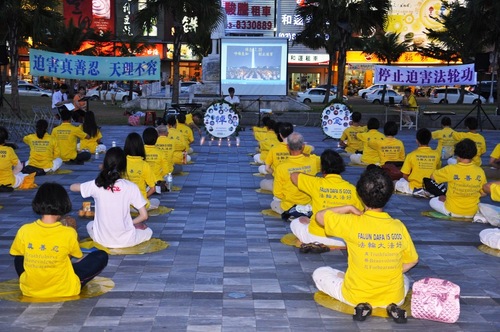 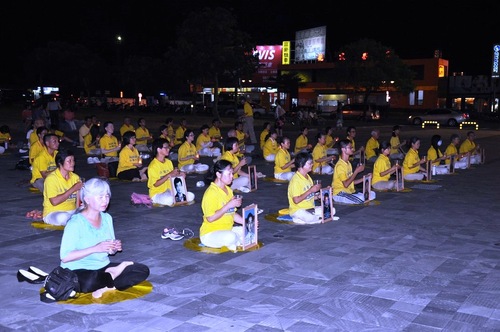 Falun Gong practitioners hold a rally and candlelight vigil on the square in front of Hualian Train Station. 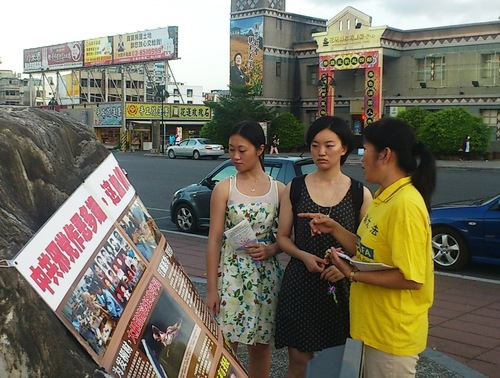 A practitioner explains the facts to tourists from China.

Local Politicians Express Support and Speak at the Rally 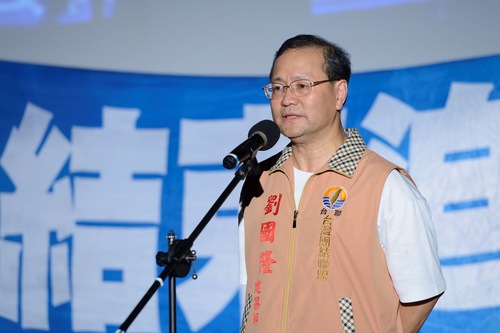 Chief executive Liu Guo-lung of Taiwan Solidarity Union Legislative Caucus said in his speech, “The Communist Party has persecuted Falun Gong for 15 years, leading to many deaths of Falun Gong practitioners. The Party even conducts live organ harvesting, an inhumane crime. Facing such brutal persecution, Falun Gong practitioners still peacefully raise awareness about the persecution and promote withdrawals from the Party. Seeing so many practitioners here today, I want to say that we encourage you to keep going. We support you!” 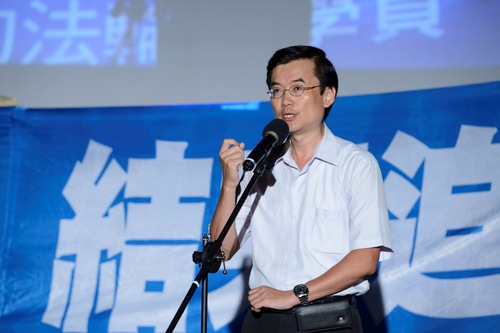 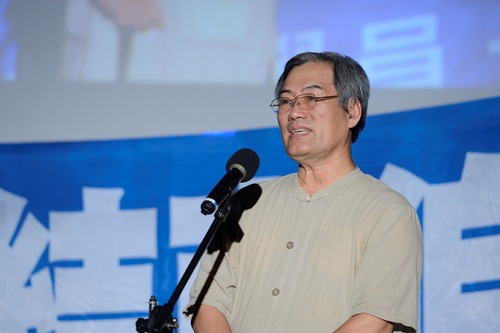 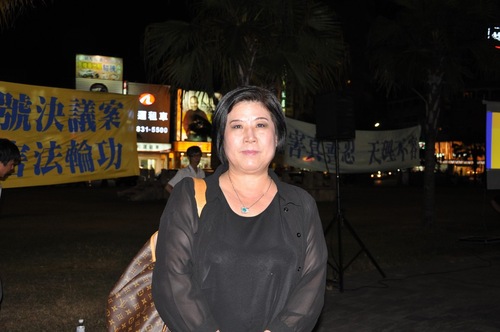 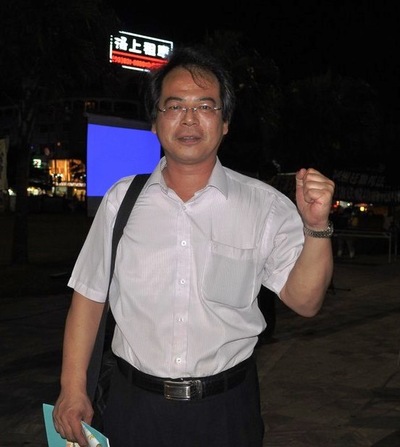 Convener Guo Ying-yi of the DPP Council wishes more Taiwanese would stand up and condemn the persecution of Falun Gong. 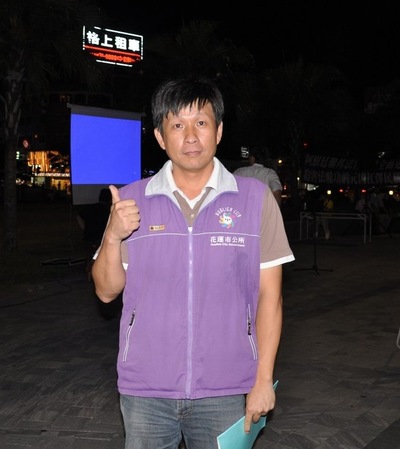 Secretary Wang Sen-yuan of Hualian City Hall wishes more people would protest the persecution and help stop it as soon as possible. 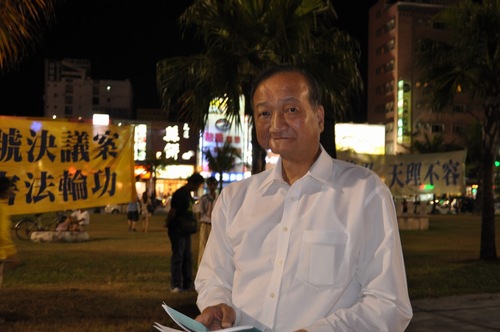 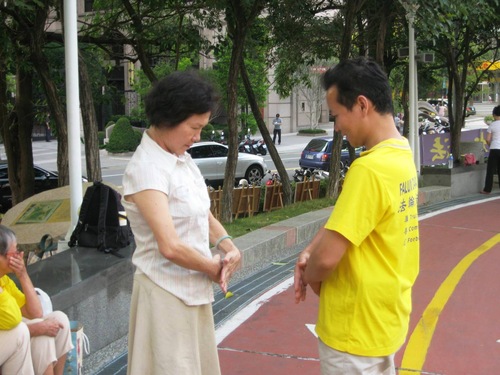 Ms. Liao, who learned the exercises at the event by imitating a Falun Gong practitioner, mentioned that she invited four friends to participate in the event.

Ms. Hsu, who came with Ms. Liao, said the event was spectacular. She said, “I mentioned to my friend that the live organ harvesting in China is true. More than ten years ago, I went to mainland China. My friends there warned me not to talk about Falun Gong, because the police would arrest anyone implicated. Six or seven years ago when I was in Shenzhen, I talked with local friends who were officials there. They told me that more than 10,000 Falun Gong practitioners were arrested in that area, and 4000 of them were missing. 'If someone needs an organ, speak out and he will get it the next day,' said one officer.” She indicated that such a heinous crime could only occur in China because it is a totalitarian regime.

Ms. Hsu's husband, Mr. Chao, looked at the photos on the poster boards carefully. He said, “I saw many reports in mainland newspapers slandering Falun Gong. The father of one of my friends was sentenced to over 10 years in prison for practicing Falun Gong. But I think this practice is very good based on my observations in Taiwan. I've never heard of any bad deeds linked to practitioners. Yet, in mainland China, the Communist regime cannot tolerate so many people practicing the same belief. That's why it persecutes Falun Gong.” 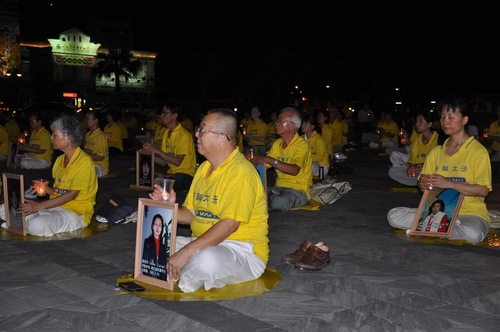 Director Yan Yan-guang (first from left) participates in the candlelight vigil in Hualian. 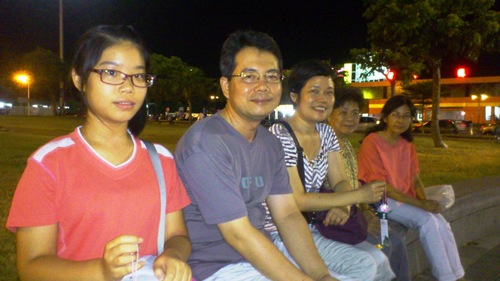 Mr. Chu, a visiting teacher in Taichung, came across the rally in Hualian during a family trip. His whole family watched the event. 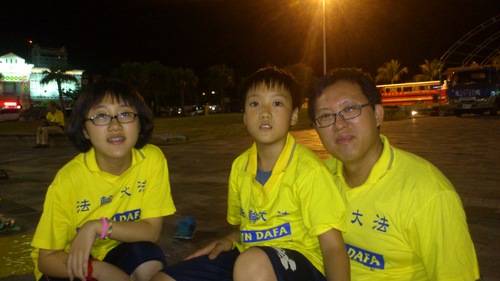 Director Jiao Yuan-chang of the Counseling Office at Ciqiang High School participates in the candlelight vigil with his two children.

During the last 15 years, Falun Gong practitioners have continued to protest the persecution peacefully and rationally. Many people have seen their steadfast efforts for justice. More and more people are choosing to stand up to express their support to end this inhumane persecution in China.