Rally and Candlelight Vigil in front of Chinese Consulate in Toronto, Canada

(Minghui.org) “I've heard of Falun Gong, but I didn't know the persecution was so brutal. It has been 15 years! I'm surprised. Thank you for your introduction. I'm so moved by the candlelight vigil,” said a motorist who stopped to observe the vigil on July 20 in front of the Chinese Consulate in Toronto.

The candlelight vigil was part of a series of events held in Toronto to mark the 15th year of peaceful resistance against the Chinese Communist Party's (CCP) persecution of Falun Gong. The persecution was initiated on July 20, 1999. 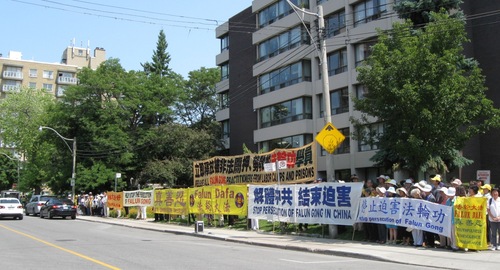 Falun Gong practitioners hold a rally in front of the Chinese Consulate on July 18 in Toronto, Canada to mark the 15th year of peaceful resistance against the CCP's persecution. 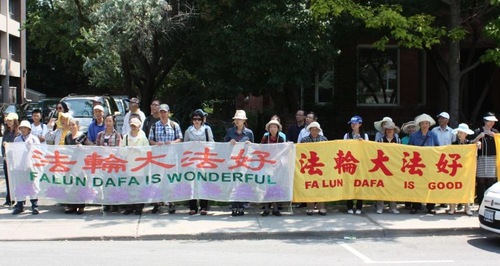 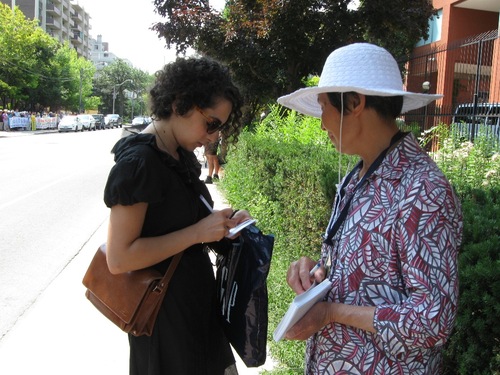 Collecting signatures in front of the Chinese Consulate 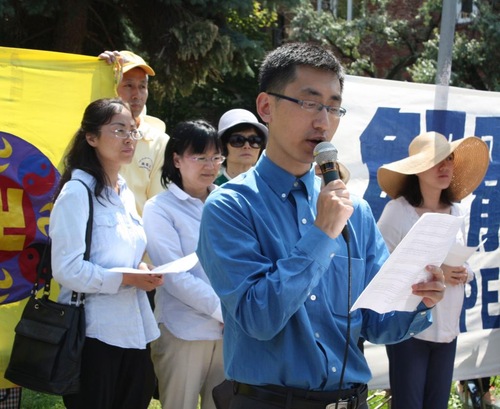 Canadian citizen Ji Li calls on the Canadian government to exert pressure on the Chinese regime to release his father, who was arrested for distributing Falun Gong information materials in China. 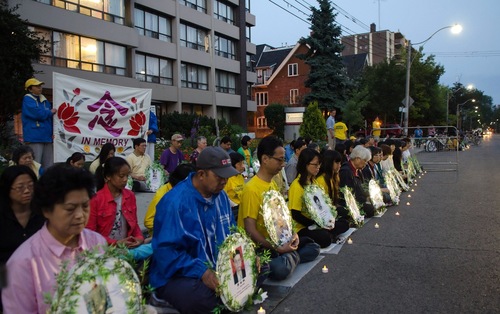 Falun Gong practitioners hold a candlelight vigil in front of the Chinese Consulate on the evening of July 20 to condemn the CCP's atrocities and call for an end to the persecution. 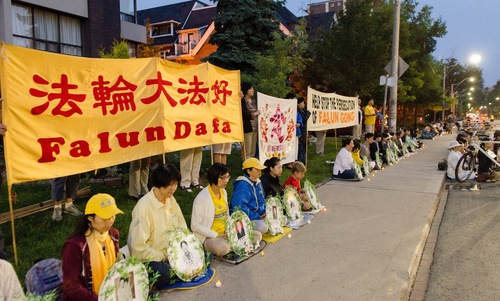 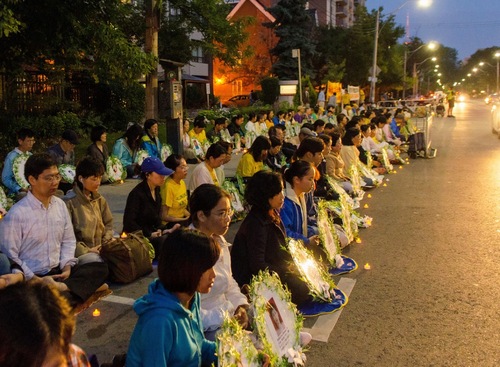 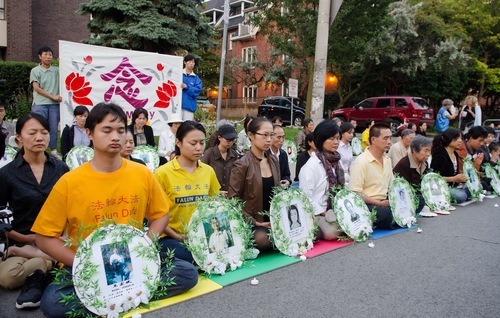 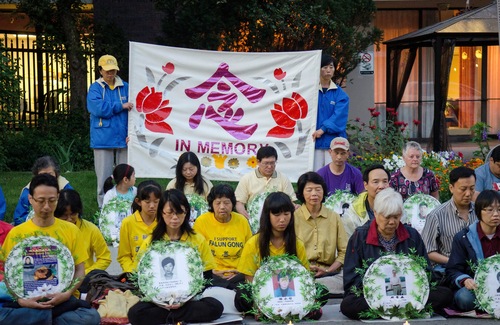 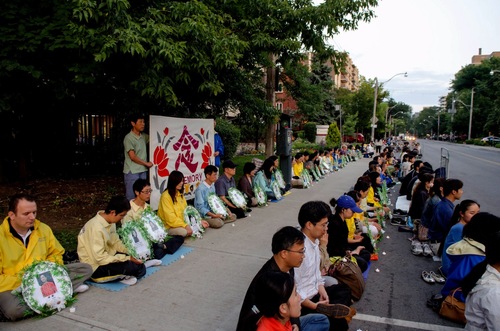 On the morning of July 18, on the sidewalk in front of the Chinese Consulate Falun Gong practitioners held banners worded “Falun Dafa is good,” “Truthfulness-Compassion-Forbearance is good,” “Disintegrate the CCP and stop the persecution,” and “Immediately release imprisoned Falun Gong practitioners.” Many people coming and going to the consulate for business stopped to take in the event and listened to the rally speeches. Some signed a petition calling for an end to the persecution.

The Royal Canadian Mounted Police dispatched a unit to maintain order at the event in front of the consulate. Practitioner Cathy talked with a police officer. The officer, who has worked on the force for 6 years, said, “For years, I see the older Falun Gong practitioners protesting here. We looked for answers by going online to your website. We found that the elderly practitioners are stronger than the police officers. We really admire them.”

Cathy said, “Thank you for protecting us for so many years. This would be unimaginable if we were in China.” The officer responded, “Yes. We all should appreciate the freedom we have in Canada,”

A Hong Kong Immigrant: I Want to Take the Best Photo to Show Them

Gavin from Hong Kong signed the petition card and took many photos of the practitioners. He said, “Such a scene is so touching. Facing so many years' persecution, the practitioners are not compromised but keep peacefully protesting. I think it they are of a high realm. I admire them!”

Gavin came to Canada ten years ago to study and now works as an engineer. He said, “I need to wait until dark and take more photos. The photos taken in the evening are more moving. I will send them to my friends and will use the best photo to showcase the event. Falun Gong practitioners are kind people. Why brutally persecute them? They are just seeking their basic rights.”

Gavin added, with emotion, “Tell them to keep it up! They will prevail!”

Iranian Immigrant: The Persecution of Falun Gong Is a Historical Crime

“I have been paying attention to China's human rights issue for 20 years. I am from Iran and know the brutality and evilness of a totalitarian regime. I keep an eye on news of China. From the June 4 incident to the persecution of Falun Gong, I am surprised to find that the Communist Party is the worst political party in the world,” said Sam Mimi who has lived in Canada for more than 20 years. He came to see the candlelight vigil with his friends. 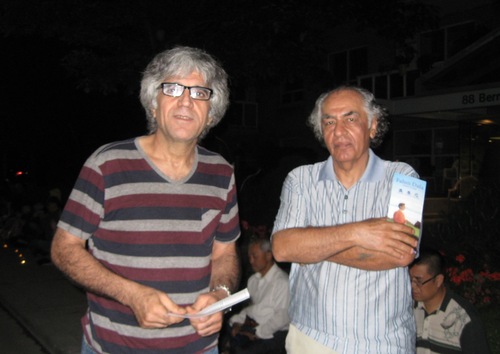 Sam Mimi (left) who has lived in Canada for more than 20 years, at the candlelight vigil with his friends.

Sam said emotionally as he turned towards the candlelight vigil, “The peaceful scene reminds me a beautiful world: no war, no violence, no contamination; everything is beautiful there. Such a demonstration is not a superficial presentation but a reflection of [the practitioners'] inner hearts. Such a combination of inner hearts and outward force gives one a feeling: they will never be defeated, forever.”

Sam wrote on a postcard to the Canadian government: I wish one day that the Chinese people will enjoy freedom. The persecution of Falun Gong is a historical crime. Support, protect, and safeguard the right of freedom.

Falun Gong Practitioners: Only by Disintegrating the CCP Can the Persecution Be Stopped

Practitioner Ji Li said, “My father is a good man, well recognized by his colleagues. He was imprisoned for 8 years for refusing to renounce Falun Gong. Family members were not allowed to visit him. He suffered countless tortures in prison. He was arrested again after he was released, for distributing Falun Gong information materials.”