(Minghui.org) “Why did you want to try it? How did you feel?” asked the Chinese students, eager to know what made their new friends – Belgian Falun Gong practitioners – believe in a practice that originated from China and that has been banned in China for over a decade.

The encounter took place on July 19, 2014, when several practitioners came to a popular tourist site in Brussels to talk to people about Falun Gong and the severe persecution taking place in China. There they met several Chinese college students who were studying in France.

Wilfreid, a Falun Gong practitioner who came to the tourist site with his wife, answered the students' questions. “I came across Falun Gong when I was looking for something several years ago to cure my shoulder pain,” he said. After asking around and searching on the Internet, he found Falun Gong. “When I did the exercises I could feel energy going through my body. It made me feel very comfortable.”

“It worked so well for me,” continued Wilfreid, “my whole family now practices Falun Gong, including my wife, my daughter and my son. We do not have to set aside time for physical fitness anymore, because Falun Gong is very good for improving both body and mind.”

“Why don’t you just do it at home? Why do you want to do it here?” one student asked.

Wilfreid replied, “Doing the exercises at home is much easier for me. But inside China, as you may know, practitioners are put in jail for their belief. Plus, the Chinese Communist Party (CCP) has made up lots of stories to defame Falun Gong, turning a large number of people against Falun Gong. This is not fair for Falun Gong practitioners, nor for the Chinese people, who have been deceived into acting against the innocent practitioners.” That was why, Wilfried said, he needed to come to the tourist site, at his own expense, to tell people, including Chinese tourists and students, the facts about Falun Gong.

“Speaking of money,” one student asked, “are you making money out of this?” [The student was alluding to the CCP's defamatory propaganda that practitioners are paid to clarify the truth about Falun Gong.]

“No, not even a penny,” Wilfreid laughed. Because he works in a furniture factory, his hobby is carpentry. Everything at the practitioners' site was made by him, from the table, chairs, and banners. “My wife also added a woman’s touch and helped make the paper lotus flowers,” he said.

After the chatting, the students were satisfied with their new understanding. As they left, one of them held back and whispered to Wilfreid, “In fact, many people in Chinese know the truth about what has happened [about Falun Gong]. Just they dare not step forward to do the right thing.”

Nick, a 6-foot-tall young man, is a practitioner who lives near Brussels. He has practiced Falun Gong for 7 years. He spoke with pedestrians about the CCP's brutality against practitioners for their belief.

Many people were surprised by the severity of the persecution. Joseph McTaggart, a teacher from the UK, read the posters and signed the petition calling to end the persecution. He said, “Falun Gong practitioners are very peaceful and they are good people. The persecution and forced organ harvesting from living practitioners is just too cruel. We need to do something to help our brothers and sisters on the other side of the world.” 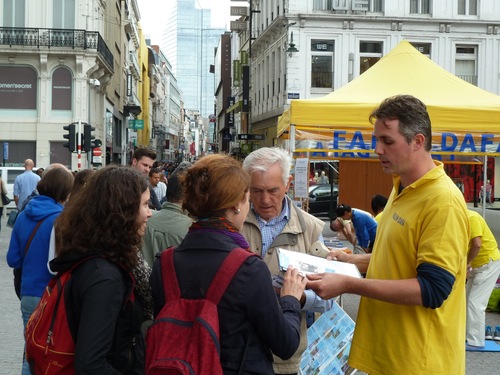 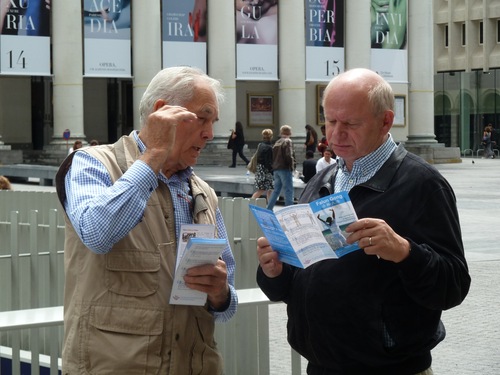 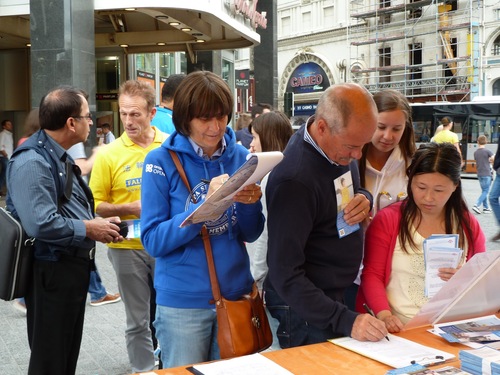 People signed a petition calling for an end to the persecution 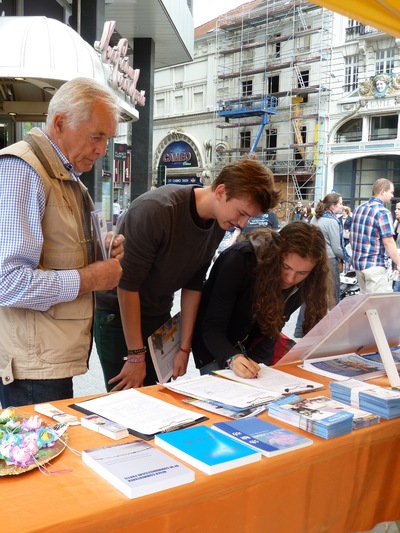 Some people were interested in the meditation itself. One of them pointed to the posters that illustrated the exercises and asked Nick, “Is this what Falun Gong is all about?” “No, the exercises are just part of it,” Nick replied. “One also needs to follow the principles of Truthfulness-Compassion-Tolerance when practicing Falun Gong.”

The gentleman was excited, “Thank you very much for telling me this. I have been looking for something like this for many years and even planned to visit some temples. Now I think I have found it.” He took some informational materials and left. 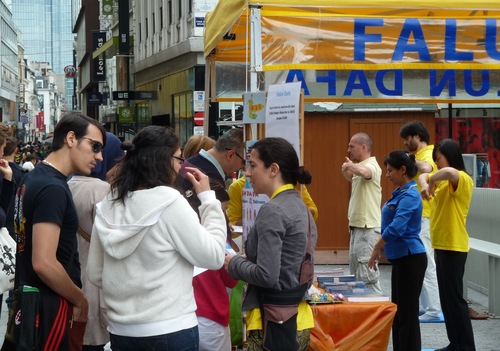 Practitioners demonstrate the exercises and talk to people about Falun Gong 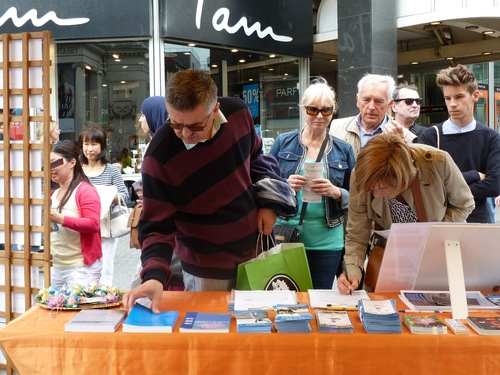 After learning more about Falun Gong, a number of people wanted to give it a try

Nick said that he and other practitioners took turns coming to the site twice a week to raise awareness of the persecution. As he watched a person signing the petition, he said to a Minghui correspondent, “By tomorrow, the persecution of Falun Gong in China will have been 15 years. If more people could join us, we could end this persecution sooner.”

“Irish Member of Parliament: “Attacks on the Rights of Falun Gong Practitioners Are an Attack Against All of Us””