(Minghui.org) Representatives from many organizations voiced their support for Falun Gong and called for an end to the 15-year-long persecution of the practice in China at a rally in front of the Chinese Consulate General on Granville Street, West Vancouver, on the afternoon of July 18, 2014. 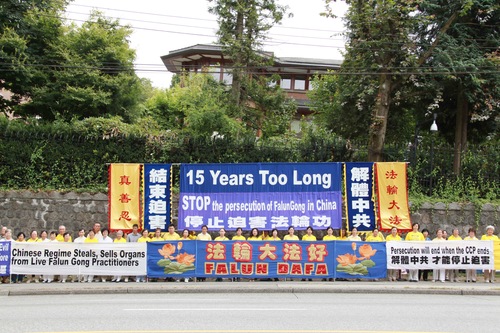 Vancouver practitioners rallied in front of the Chinese Consulate General on July 18, 2014, calling for an end to the persecution.

Granville is a busy street that runs through the center of West Vancouver, a wealthy community in the metro Vancouver area. The practitioners' banners read: “15 Years Too Long, Stop the Persecution of Falun Gong in China,” “Persecution Ends When the CCP Ends,” “Chinese Regime Steals, Sells Organs from Live Falun Gong Practitioners,” etc. Many drivers honked their horns in support. Reporters from Global News TV station interviewed Ms. Zhang Su, a representative of the local Falun Dafa Association. 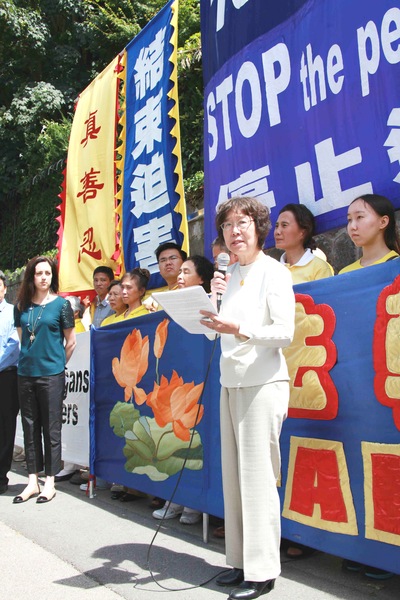 Ms. Zhang Su, representative of the Falun Dafa Association, at the rally

Falun Gong: Those Responsible Will Be Brought to Justice

The rally commemorated the Falun Gong practitioners who have lost their lives upholding Truthfulness-Compassion-Forbearance during the 15-year-long persecution launched by the then Chinese Communist Party general secretary Jiang Zemin on July 20, 1999.

Ms. Zhang Su, representative of the Falun Dafa Association, said that, despite the persecution in China, Falun Gong has spread to over 100 countries and regions around the world and has benefited millions. At the same time, countless people have signed their names to support Falun Gong and demand an end to the persecution.

She warned the communist officials who have participated in the persecution that they will be brought to justice for their crimes against mankind. She also appealed to the Canadian government to take action to help end the persecution and release all jailed Falun Gong practitioners in China. 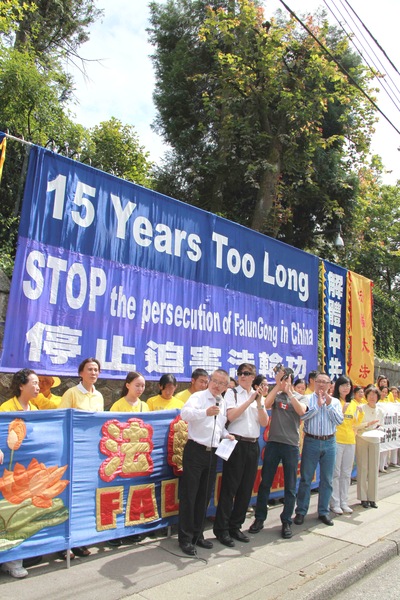 Mr. Li, a representative of the Canadian Alliance for Social Justice and Family Values, at the rally

“Our Respect to Founder of Falun Gong Mr. Li Hongzhi”

Mr. Li, a representative from the the Canadian Alliance for Social Justice and Family Values, a non-governmental organization, said: “Falun Gong practitioners have not only persisted in their beliefs but also taken on the responsibility to clarify the truth about the persecution to the Chinese people in an extremely harsh environment for the past 15 years. Today we express our respect for Falun Gong.

“Communist tyranny is based on lies. Falun Gong followers have selflessly devoted themselves to the task of clearing up the CCP's lies, created software to help Chinese people break through the information censorship Internet firewall, and established media like the Epoch Times and the New Tang Dynasty TV. These are huge projects involving thousands of hours of manpower that have benefited over one billion people in China. This is one of the reasons we must express our respect to Mr. Li Hongzhi, the founder of Falun Gong. 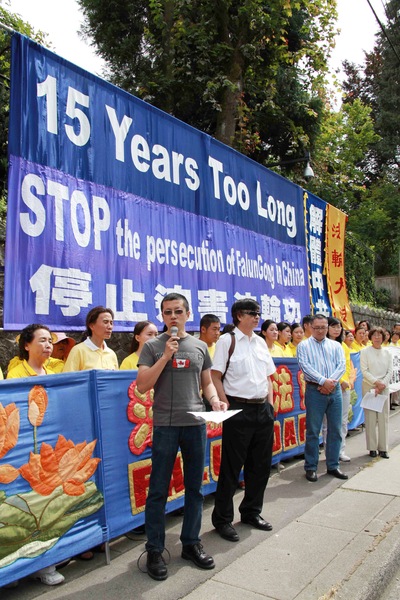 Mr. Chen, representative of Democratic China, at the rally

“The Power of Faith Will Defeat Evil.”

Mr. Chen, a representative of Democratic China, said: “The power of faith will defeat evil. The Chinese Communist Party has marshaled all its resources to persecute Falun Gong and has even condoned the harvesting of organs from living Falun Gong practitioners. Such an atrocity challenges the moral bottom line. But the persecution is doomed to fail.” 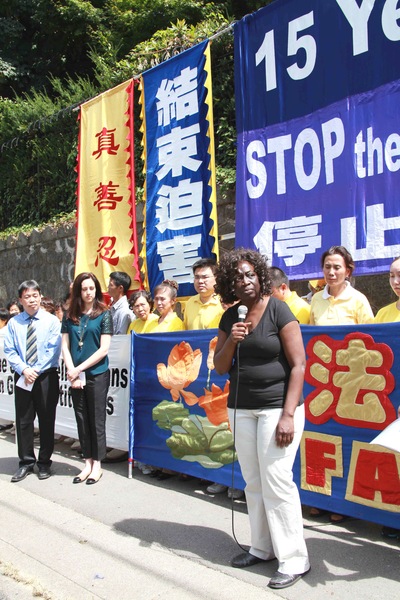 Ms. Sadie Kuehn, chair of Friends of Falun Gong of British Columbia, at the rally

“We Work Together to End the Persecution”

Ms. Sadie Kuehn, chairwoman of Friends of Falun Gong of British Columbia, said that, although Falun Gong practitioners have been deprived their basic human rights and dignity for 15 years, they are still working hard to restore their right to practice (in China). “I believe it is very important that we stand together. And together we call on the Canadian Government and the world leaders to take action to stop the Chinese Communist Party's persecution.” 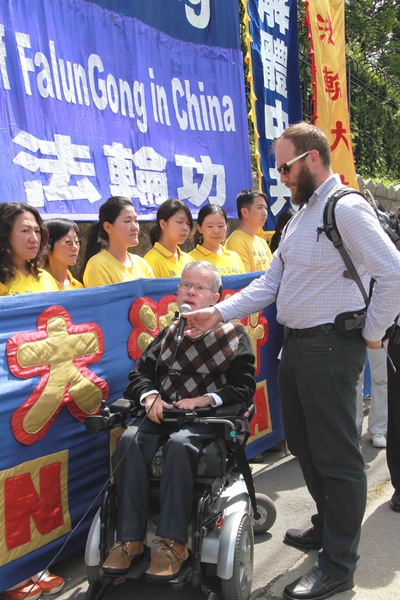 Mr. Tim Louis, former Vancouver city councilman, said he supported Falun Gong 100 percent. He said that those who are not persecuted must side with those being persecuted. "The more effort we make, the faster the persecution will end. By working together, we can have a better future." 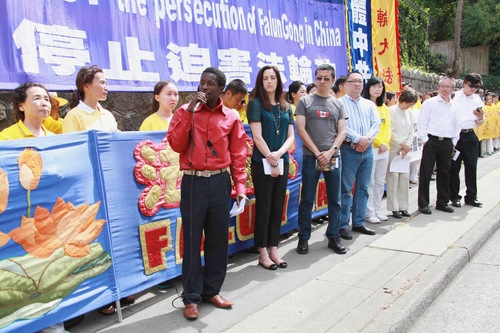 Mr. Yasin Kiraga, the president of African Political Communications Network, at the rally

“Stopping the Persecution Is Everyone's Duty”

“Harvesting organs from living Falun Gong practitioners is a crime,” said Mr. Yasin Kiraga, the president of the political consulting firm African Political Communications Network. “We shall do the right thing, that is, to condemn the Chinese Communist Party's crimes. I will write to Amnesty International and the United Nations to remind them that the persecution of Falun Gong is still on-going in China. The world must stop this persecution. I come here today to remind everyone that ending the persecution is everyone's duty. Everyone has the right to live and to have freedom of belief.” 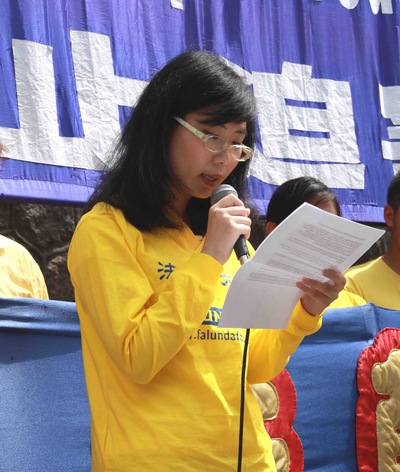 Ms. Alice Zhang, a Vancouver practitioner, called on the public and the Canadian government to help secure the release of her mother, Ms. Tang Huafeng, who has been detained in Jinzhong City Detention Center for practicing Falun Gong for the past five months. Police in Yuci City, Gansu Province, arrested her at home on February 22, 2014, and confiscated books and fliers about Falun Gong. The attorney told the family that the clothes they had sent to the detention center for her were never delivered and that her family was not allowed to visit her.

Ms. Zhang appealed to the Canadian Government and called on all kindhearted people to help stop the persecution in China and to ask the CCP to release her mother and all jailed Falun Gong practitioners. 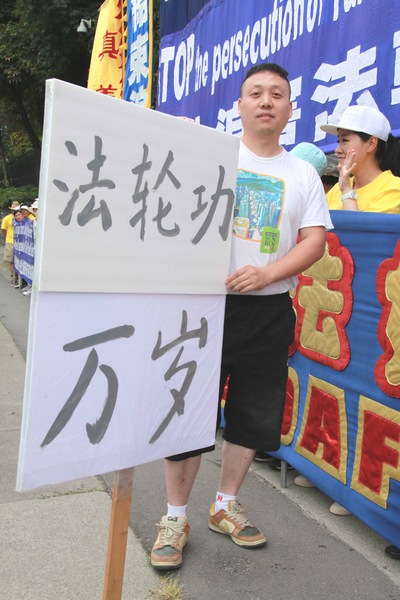 Mr. Wang is a new immigrant from China. He took a day off from work to join the rally. He said he was honored to side with Falun Gong: “Their belief in Truthfulness-Compassion-Forbearance is just and noble. It is my honor to live beside such people,” he said.

“After I learned the truth about Falun Gong in Canada, my ideas about it changed completely. I wanted to do something to correct the mistakes the Communist Party made. I know a lot of people with a conscience wanted to join the rally and side with Falun Gong.

“I want to appeal to all the Chinese people in the world to learn from Falun Gong's persistence to uphold justice. I made a poster that says, 'Long Live Falun Gong,' because I hope Falun Gong lasts forever, in the history of China and the history of world. I believe Falun Gong represents justice and goodness. I want the Chinese people to see my board, so that we can work together to do some meaningful things. If everyone makes just a small contribution, coming together, we can have a brighter future.”

“On the Subject of Truthfulness”