Washington, DC: Parade on Pennsylvania Avenue Calls for an End to the Persecution

(Minghui.org) A parade of over 1,000 Falun Gong practitioners yesterday on Pennsylvania Avenue caught the attention of professionals and tourists. Practitioners gathered in Washington, DC, on July 17 and proceeded down this major thoroughfare after a rally on Capitol Hill. 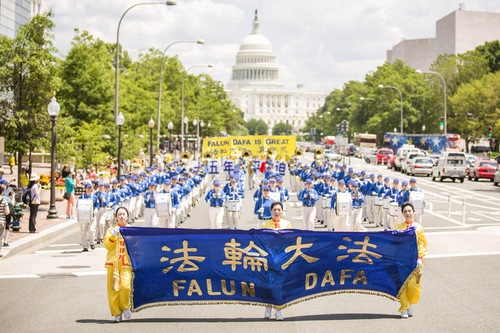 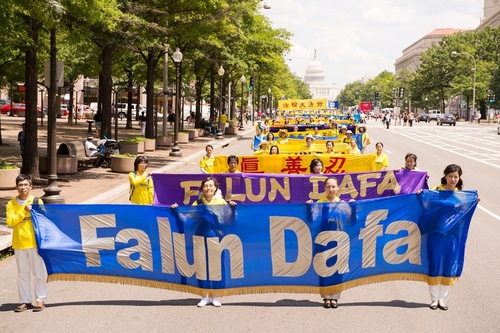 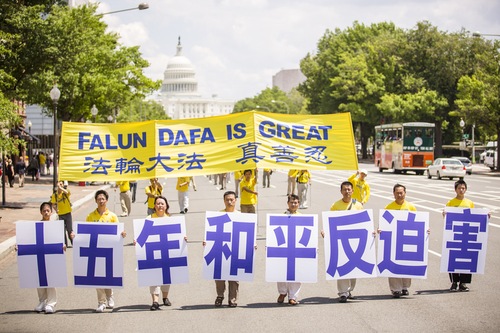 The Chinese words mean “15 Years of Peaceful Resistance to the Persecution.” 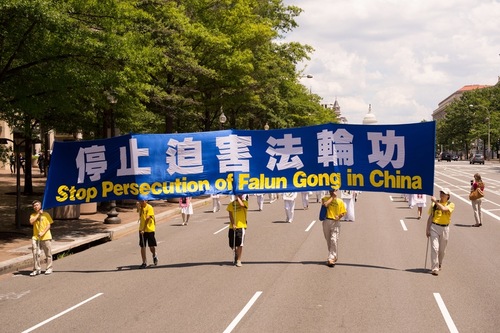 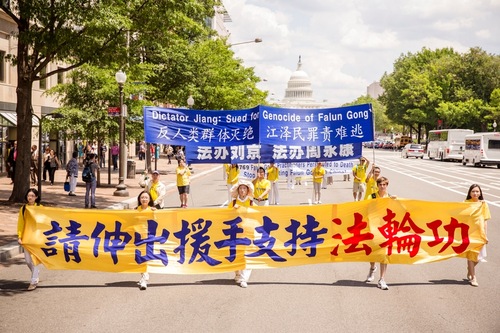 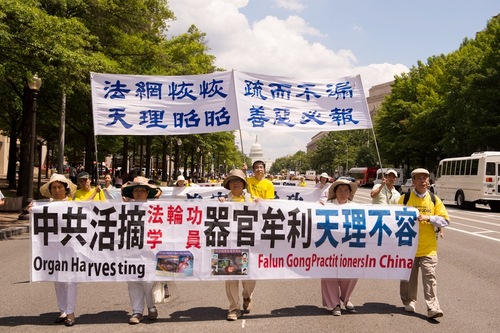 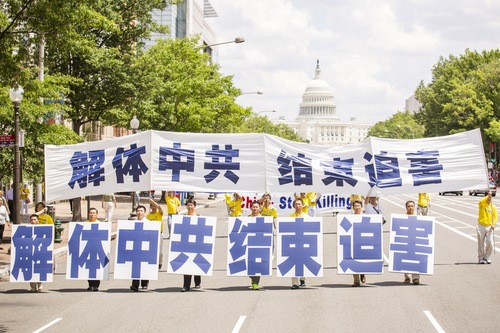 The Chinese characters say “Disintegrate the Chinese Communist Party (CCP), End the Persecution.” It reflects practitioners' belief that the two will probably occur at the same time, given the fact that knowledge of the facts of the persecution has helped the Chinese see the nature of the CCP and peacefully accelerate its disintegration by choosing to renounce their memberships.

The parade extended over 10 blocks and passed by major government agencies, including the Departments of Justice, Labor, Commerce, and the Federal Bureau of Investigation (FBI). 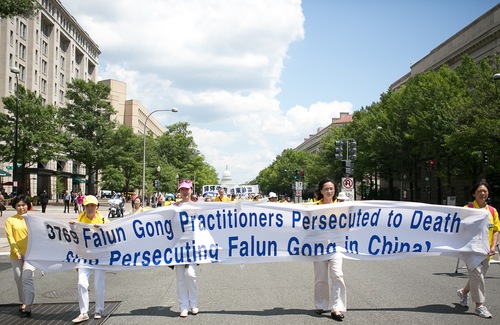 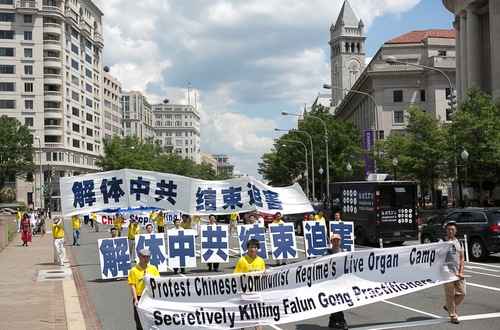 The participants conveyed a sense of dignity and serenity. They brought banners with them from their hometowns to express their thoughts: “Falun Dafa Is Great,” “The World Needs Truthfulness-Compassion-Forbearance,” “Stop the Persecution of Falun Gong in China,” “Thousands Murdered and Jailed; Jiang Zemin Sued for Genocide,” “Thousands Killed, Millions Persecuted, You Can Help,” and “Disintegrate the CCP, End the Persecution.”

Betty Johnson works at a non-profit organization, one of the three major industries in Washington, DC. She made an effort to join the parade to lend her support.

“Unbelievable! Such horrendous crimes are happening in China now!” Even though she knew about the persecution already, the section of the parade with pictures of those persecuted to death still left a deep impression on her: “How can the persecution still be going on now? That is so wrong!”

Graphic designers Andrea and Tonya, who work at a nearby law firm, watched the parade for a long time. Andrea thought Truthfulness-Compassion-Forbearance was a very pure belief and that it was ridiculous for people to be persecuted for practicing their belief.

Tonya has seen practitioners' activities in Washington, DC, for several years. She remarkd that such activities are very important and necessary to remind people each year that the persecution hasn't ended yet: “You should help.”

Watson, a Chinese American and medical professional, took pictures of the Divine Land Marching Band. His sister-in-law is a Falun Gong practitioner, so he was familiar with the practice. He expressed his admiration for practitioners' 15 years of persistent peaceful efforts to end the persecution.

“A Close Look at the Brainwashing Industry in China: Revenue I (Part 2 of 4)”

“Washington, DC: Candlelight Vigil Honors Those Gave Their Lives to Uphold Their Faith”