A Close Look at the Brainwashing Industry in China: Policies, Funding, and Scale

(Minghui.org) While the world has focused on China's media, oil, banking, and transportation industries, it is important to note that human rights violations practically form a sub-industry in the public sector.

After the Chinese regime shut down its labor camps late last year, they were replaced by “black jails,” or extralegal detention centers, as documented by Amnesty International's December 2013 report. In other words, the same human rights abuses continue, but are simply hidden in more secretive facilities.

Over the 15-year persecution of Falun Gong, its practitioners have gathered extensive, firsthand information about brainwashing centers, a common type of black jail and a strange industry of its own. These brainwashing centers are established to “transform” Falun Gong practitioners, i.e. force them to renounce their beliefs through coercion, and physical and psychological torture.

This “brainwashing industry” in China is policy-driven and state-run. The execution and operations involve officials at each government branch, all the way to the lowest level in counties and villages. While brainwashing of Falun Gong practitioners has also been carried out in detention centers, prisons, and labor camps, this report focuses only on dedicated brainwashing centers.

Its “customers” (better described as “targets”) are prisoners of conscience and Falun Gong practitioners. Revenue sources and mechanisms however, run parallel to other public sector industries.

The major sources of money circulated in the brainwashing industry include government appropriations (mainly in the form of construction funding), bonuses paid by the government based on the number of “transformed” practitioners, “education fees” paid by the practitioners' employers, and ransoms paid by practitioners and their families. Some of the income goes directly to staff members' personal accounts and does not appear in a brainwashing center's budget.

It is estimated that during the past 15 years, the Chinese government has invested 1.18 billion yuan in brainwashing center construction projects, and paid 226 million yuan in bonuses to the centers' staff for forcing Falun Gong practitioners to renounce their beliefs. (Note: 1 US dollar is about 6 yuan in recent years and about 8 yuan ten years ago)

For every employed practitioner detained at a brainwashing center, his or her employer is forced to pay the center an average of about 20,000 yuan per month as the total of an “education fee" (9,450 per practitioner) and "companion fee" (10,800 for 5,400 per "companion," two companions per practitioner, see details in part 2). Income through this channel sums up to 3.37 billion yuan in the last 15 years.

Since the persecution began, brainwashing centers have been a major income source for officials, both in the police and domestic security system, and the 610 Office, a gestapo-like organization created specifically to oversee the persecution of Falun Gong.

Encouraged by government policy, officials chase after fortunes to be made from brainwashing centers. The head of a center can typically accumulate tens of millions of yuan in “side” income. [1]

We conclude that conservatively, the total amount of money circulated in this strange industry since the inception of the persecution is at least 4.87 billion yuan.

All the data used in the estimates are from published articles on the Minghui website. Due to the heavy censorship of information in China, the estimate is approximate, and may reflect only a fraction of the whole picture.

When the persecution began, the Chinese government announced that the main task in “the war against Falun Gong” was to “transform Falun Gong practitioners,” which means forcing them to give up the practice through brainwashing and torture.

Brainwashing centers were planned and built specifically for the “transformation” task.

This policy was actively carried out by several government departments. For example, at a national conference of provincial judicial bureaus chiefs, on January 16-18, 2001, then-Minister of Justice Zhang Fusen asked the local judicial bureaus to take on “transforming Falun Gong practitioners” as a required task.

On April 25, 2001, the Organization Department of the CCP Central Committee communicated instructions for “the war against Falun Gong” to its local branches. These instructions comprised three documents containing experiences of “transforming Falun Gong practitioners” as summarized by the Masanjia Forced Labor Camp in Liaoning Province, the labor camp bureau in Beijing, and the CCP committee in Qitaihe City, Heilongjiang Province.

Following the model set up in Xigang, Dalian, the city of Beijing set up a “Legal Training Center” with help from the central government. Its function is to train local government officials from all over the country in brainwashing techniques for transforming Falun Gong practitioners.

The central government and the CCP committee in Beijing soon actively promoted brainwashing centers as a model for “transforming” Falun Gong practitioners. Local governments at each level were directed to set up these centers.

Driven by the central government, local governments came up with all kinds of detailed policies for “transforming” Falun Gong practitioners.

The local government of Hexi District, Tianjin City asked the residential committee, police station, and employers associated with Falun Gong practitioners to collaborate in watching and transforming them. These three organizations are required to sign a contract specifying their responsibilities.

In Xiaguan District, Nanjing City, to engage the employers and residential committees of Falun Gong practitioners in the transformation task, the government required each employer, and the head of each residential committee, to pay 200 and 100 yuan,respectively, as a deposit each year.

At the end of the year, if the transformation quotas are met, the government would refund the deposits and reward them with bonuses. If they failed to meet quotas, in addition to losing the deposits and bonuses, they would be subjected to disciplinary sanctions by higher administrative authorities.

For example, Gu Songhai, deputy chief of the Heilongjiang Provincial 610 Office, directed the setup of and oversaw brainwashing centers in many cities, including Wuchang, Jiansanjiang, Qitaihe, Hegang, Yichun, Mishan, Jixi, Shuangyashan, Daqing, Mudanjiang, Qiqihar, and Harbin. If a certain brainwashing center had a low number of detainees, he urged the local 610 Office to illegally arrest more practitioners to fill them.

The 610 Office in charge of the Lannigou Brainwashing Center in Guiyang City, Guizhou Province, directs practitioners' employers and residential committees to do a survey at the beginning of each year to determine the individuals who are still practicing Falun Gong. Based on the results, the 610 Office tasks these organizations with sending practitioners to the center.

The annual performance evaluations of these employers and residential committees are tightly associated with their transformation of Falun Gong practitioners, and other performance indicators are secondary. The same applies to annual bonuses for the staff. For each transformed practitioner, the staff receives a certain amount of bonus income. This policy incentivizes the organizations to send as many practitioners to the brainwashing center as possible.

Every session at the Luotai Mountain Brainwashing Center in Fushun City, Liaoning Province, begins with the provincial 610 Office and PLAC giving arrest assignments to local 610 Offices in nearby cities. These 610 Offices, in turn, force police stations and employers of practitioners to perform the arrests.

A police station in Fushun that was not able to reach the quota for arresting and sending practitioners to the brainwashing center, hired non-practitioners to register at the center, at a price of 20 yuan per day. These hired individuals pretended to be Falun Gong practitioners, and agreed to “give up practicing” at the center. This way, the transformation quota assigned by the higher authority was fulfilled.

Many employers of Falun Gong practitioners refused to comply with these policies. In return, the 610 Offices threatened to fine all of the employees.

Scale of the Industry: Billions of Yuan

We will estimate the scale of the industry in two aspects, the total fixed assets and the total circulated in the system. Due to the information blockade in China, it is impossible to determine exactly how much the regime has invested, and how much government officials have made from the brainwashing centers. Nonetheless, we can still perform an approximate analysis based on published literature.

Two major government investments in brainwashing centers are construction project costs and daily operational costs. Estimating the latter involves the number of total staff and other costs, such as utility fees. Very limited information on these types of costs are available. Thus, we discuss only the construction project costs, i.e., the fixed assets of the centers.

Brainwashing centers are part of a top-down system. Each province sets up a provincial-level center, such as the Xinjin Center in Sichuan Province, and the Hubei Legal Education Center in Hubei Province. Each prefecture-level city and county may also have their own center. The centers at these levels are permanent.

Note: prefecture-level cities in China are an administrative division below a province and above a county or county-level city.

At the town level, there are numerous ad hoc temporary centers, which may be set up when needed and decommissioned after one or two sessions. We exclude the temporary centers in our analysis and focus only on the permanent ones.

Table 1 lists a few examples of governmental investment in brainwashing centers at different levels. On average, the construction cost of a provincial, prefecture, and county level center is 19.82 million, 1.75 million, and 0.4 million yuan, respectively. 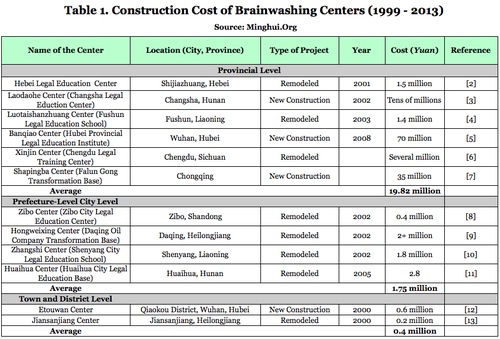 There are 31 provinces, 324 prefecture-level cities, and 2,855 counties in China. Not all counties have their own center, but it is safe to assume that there is at least one regular center in each province and each prefecture-level city. Based on this conservative assumption, the total construction cost of the brainwashing centers is estimated to be 31*19.82M + 324*1.75M = 1.18 billion yuan.

This estimate gives only the lower bound of the cost, as the centers at county and town levels are excluded from the analysis.

In addition to construction appropriations, brainwashing centers have three major income sources: government rewards (bonuses) for transforming practitioners, education fees paid by practitioners' employers, and ransoms paid by practitioners and their families. Some of the income goes directly to staff members' personal accounts and does not appear in the centers' budgets.

Cumulative education fees depend on the total number of practitioners detained in the centers, the length of detention, and monthly fees paid by their employers.

Finally, the cumulative ransom is calculated as the product of the total number of practitioners detained in the centers, and the amount of money each practitioner (or their family) had to pay.

Thus, the key information needed to estimate each item is the total number of practitioners who have been sent to the centers during the past 15 years. It is difficult, if not impossible, to determine an exact number. Nonetheless, published statistics provide an approximate number.

At the prefecture level, detainees range from 57 to 1464, with a mean of 383, from 1999 to 2013. This number may be largely underestimated, as the average numbers for town/district level centers and county/county-level city centers are 177 and 26, respectively, and each prefecture-level city contains dozens of towns, districts, and counties. For example, Guangdong Province has 21 prefecture-level cities, and each city has and average of 2.6 districts, 54.5 towns, and 3.2 counties/county-level cities. 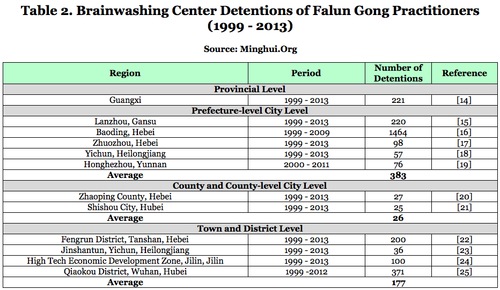 The number of provincial-level detainees is available only in Guangxi, which was 221, from 1999 to 2013. Obviously, using this number as an average for all the provinces would be a great underestimation. However, until we can obtain more data, we will use this number for a conservative estimate.

Since the numbers of brainwashing centers at or below county level are unknown, we will exclude the detainees in those centers, although they make up a considerable fraction of the total detainees.

Using this number, we tabulate the total amount circulated in the brainwashing system in Table 3. The detailed calculations of the fees per person or per month of detention are available in Tables 4-6 in the following sections.

We estimate that the income from government rewards, education fees, and ransoms for all the detainees from 1999 to 2013 are 226 million, 3.37 billion, and 95 million yuan, respectively, totaling a circulated amount of 3.69 billion yuan. We would like to emphasize again that this is likely an underestimation for reasons given above.

This is the first article of a four-part series. More data and analysis will follow in parts 2-4.

“Convincing People to Withdraw from the CCP: Simple Words with True Caring”