(Minghui.org) The 2014 Montreal Falun Dafa Cultivation Experience Sharing Conference for Young Practitioners was held at the University of Montreal on July 6, 2014, right after a 9-day intensive Fa-study summer camp.

Most of the 17 youths who spoke at the conference talked about their experiences of Fa-study, doing the exercises, improving their xinxing, and participation in the Fa-validating projects at camp. 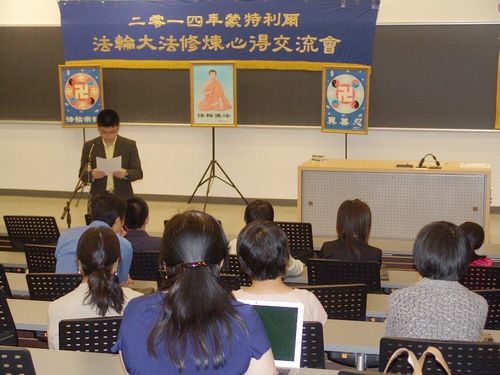 The 2014 Montreal Falun Dafa Cultivation Experience Sharing Conference for Young Practitioners was held at the University of Montreal.

Miss May said she didn't want to attend the camp at first, but only after two days, she understood why her mother had insisted she apply and sent her to the camp. When she studied the Fa at home alone, she just followed her own feelings as to when and for how long to study, and she hardly ever had any new insights. At camp, she studied the Fa with the group, which was more enjoyable and more beneficial.

Miss Lee said she usually sleeps 8 to 9 hours a night on weekdays and about 11 hours on the weekends. At camp, she only slept 6 hours a night, but felt she had more energy than when she slept longer.

During the 9-day intensive Fa-study camp, the participants were required to recite two pages of Zhuan Falun every day.

Miss Qi said she had never thought of reciting the Fa before. But when she did, she saw new meanings in sentences that had appeared ordinary when reading it as usual. She said it was because her heart (mind) was tranquil so the Fa entered her more easily and the Fa also strengthened her tranquility.

“In Western countries, students are not required to recite the textbook,” said Miss Yang. So the assignment to recite two pages of the book was really hard for her at the beginning, because she had to clear out all interfering thoughts and concentrate. Soon, she could see the meaning of every character in the Fa, which was enlightening to her. As of now, she could only remember one paragraph a day, but she vowed to continue after camp was over.

Miss Cadee was very impatient when her mother tried to correct her exercise movements at home. On the first day of the camp, she was embarrassed when she saw other young practitioners patiently listening to the instructors. She also learned that a correct movement was very important, because the wrong movement would change the mechanism installed by Master and deform the law wheel. After that, she was always happy to accept corrections from the instructors and young fellow practitioners.

Xiao Wei said he could only sat with one leg crossed when camp began. By the end of the nine days, he could meditate with both legs crossed, though it was only for a few minutes. But he was very happy that he could and would continue to work on it to sit longer.

Overcoming an Addiction to Games

Xiao Hao, 11 years old, said his addiction to video games had result in his scores at school falling from mostly 100's to as low as 45. The Fa-study camp was very helpful to him, because he didn't have any desire to play games on the first day of camp and hasn't felt any anxiety to use a computer since then.

William said he used to be very addicted to video games. After young fellow practitioners shared what harm playing video games could do, he realized that playing them would accumulate bad things in his body so he decided to quit them totally.

Many of the young practitioners are also members of the Divine Land Marching Band. They found the Fa-study camp also improved their performance in the band.

Xiao Zhang said that Fa-study at camp was more effective than at home. The first afternoon, he participated in a band parade that marched for two hours. He shared that he was more concentrated and his performance was more rhythmic. Not only that, he didn't feel tired and found it easy to finish the long parade.

Even though they are growing up in a family in which one or both parents practice Falun Dafa, the 9-day intensive Fa-study camp was a unique experience for most of the young practitioners. Some of them were reluctant to attend at first, but they obtained unexpected benefits.