(Minghui.org) “I applaud the principles of 'Truthfulness-Compassion-Forbearance.' Especially in today's society, if only 10% of people follow these principles, it would change the world,” said Carolyn Towbin when she saw Falun Gong practitioners at the 4th of July parade in Coronado island, across San Diego Bay from downtown San Diego.

Among 130 participating groups, the Falun Gong group from San Diego was the only Chinese group. They have taken part in this parade for over 10 years. 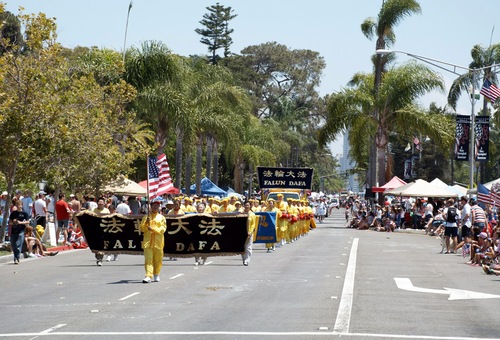 Falun Gong practitioners at the 4th of July parade in Coronado, California 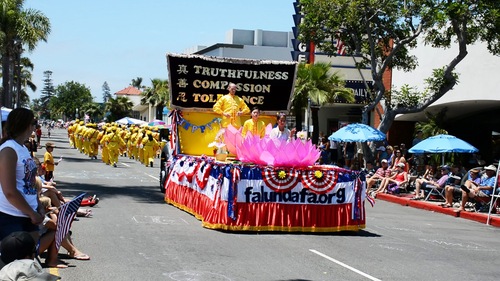 Practitioners performed waist drums and demonstrated the exercises on a float.

Carolyn Towbin, the president and CEO of Towbin Automotive Group in Las Vegas, was on a vacation in San Diego and attended the parade with her family.

“Falun Gong is peaceful. It is important to have peace in the chaos of this world,” Ms. Towbin said.

As a fan of meditation herself, Towbin was happy to see a Falun Gong exercise site at a tourist spot in San Diego the day before the parade. “I was interested, and even learned some of the movements,” she said.

“These beautiful things exist in everybody's heart. If we can calm down amidst chaos, we will be able to find them. This is why I respect Falun Gong.”

Her daughter Jesika enjoyed the colorful costumes and lively drum playing of the Falun Gong practitioners. She said, “The message of Truthfulness-Compassion-Forbearance is great!”

“An Elderly Woman's Adventure in Beijing”