(Minghui.org) On June 6, Falun Gong practitioners held a petition drive to call upon the University of Sydney to revoke its offer of honorary professor to Huang Jiefu, former Chinese Vice Minister of Health, due to his involvement in live organ harvesting.

They held banners in front of university, raising awareness of the Chinese Communist Party's organ harvesting atrocities. Many teachers and students were shocked by the information and signed a petition without hesitation. 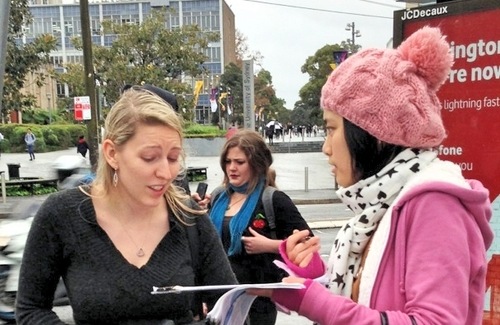 Grace (left) is shocked at the CCP's live organ harvesting

Grace, a student the university, stepped off a bus and saw the large banner exposing live organ harvesting. Her mouth dropped. She said, “I have never heard of such terrible thing. Is this true? Such a terrible thing is happening in this day and age? How terrible!” With tears in her eyes, she signed the petition.

Another student, Rebecca, passed by the banner and then stopped to ask questions and take photos. She said, “I plan to write an essay on the live organ harvesting in China and discuss the issue with other students in the university.” 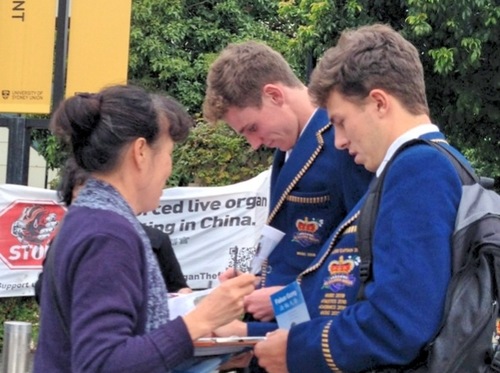 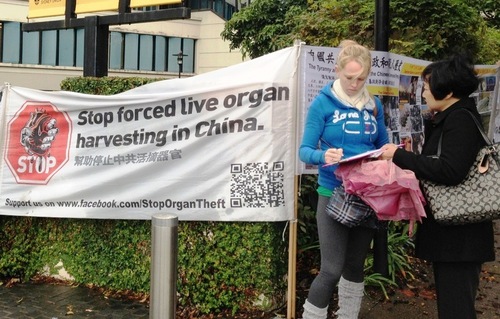 Crystal, a Falun Gong practitioner who participated in the event, said, “Today we talked to many local residents, as well as students from other countries. For example, students from Turkey, the Philippines and Pakistan came to sign the petition.”

Some Chinese students also took information materials and showed their support by agreeing to renounce their memberships to the Party and its affiliated organizations. Crystal said, “I asked one male student, 'Have you heard about live organ harvesting?' He did not answer. I explained that the reports are true, as formal investigations by third party experts have concluded that this is occurring in China, and this issue has gained international attention. He listened carefully and finally agreed to quit the Party.”

A student from Hong Kong said, “Such a crime cannot be allowed to continue.” He signed the petition and offered to help the practitioners to print and distribute more information materials. He also said he would appeal to the the University President to withdraw the offer of honorary professor to Huang Jiefu.

“Focusing Less On Ourselves Helps Us Do What Master Wants”