(Minghui.org) Two psychiatric wards were established at the so called recovery section at Gongzhuling Prison in Jilin Province. They were set up for a few inmates who were mentally disoriented from being tortured. In reality, this is a place where Falun Gong practitioners are tortured.

The few inmates identified with mental disorientation have to sit on a board from 4:30 a.m., to 8:00 p.m. Other practitioners are forced to work like slaves.

There are “fixed beds” in the psychiatric ward, which are used to torture steadfast practitioners. The guards order the head of the inmates to torture practitioners. The practitioner is tied to a bed in a painful position. They are then stretched so their arms and legs cannot move. A person once died a few days after being released from the fixed bed in 2013. 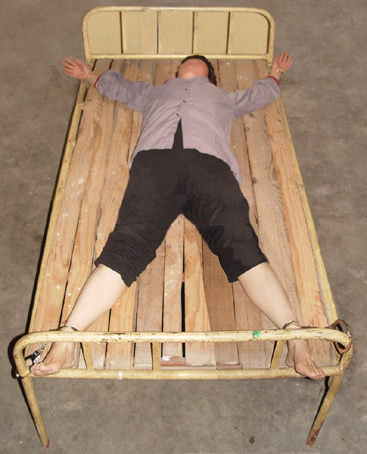 Because Mr. Zhao Yongzhi wrote a solemn statement which stated that any prior statement renouncing Falun Gong is null and void, Liu Lifeng, the instructor of the ward, transferred him to the psychiatric ward and shocked him with an electric baton. Mr. Zhao was tortured for more than two weeks.

Mr. Liu Qingtian wrote an appeal letter to the court and was reported in October 2013. Therefore, Liu Lifeng took Mr. Liu to the psychiatric ward where he was tortured for more than 80 days. 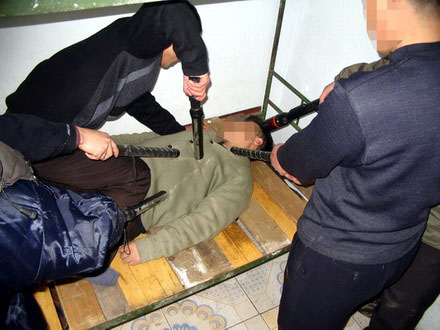 Mr. Liu Hongwei, from Jilin Province, was arrested in October 2006 and sentenced to 13 years in prison in 2007. He was taken in a wheelchair to the recovery ward (currently named No. 8 Ward) at Gongzhuling Prison. He is very weak and his lower extremities are paralyzed. He is still being tortured despite his disability. In an effort to have him renounce Falun Gong, the prison authorities forced him to watch videos that slandered Falun Gong and threatened him many times.

"Transformation” sessions lasting for three months were held in 2012 in the Gongzhuling Prison. A total of 14 practitioners, including Mr. Zhao Guoxing, Mr. Fu Hongwei, Mr. Bai Jingzhi, and Mr. Chen Liandong, were taken there because they refused to sign the five statements (similar to three statements) to renounce Falun Gong.

With a 3,000-yuan reward for “transforming” a practitioner, Niu Guosheng, the prison warden, and Liu Xiangwu, deputy warden, instigated the guards to torture practitioners.

Practitioners were hung up, beaten, and kicked. They were tied to the fixed bed, shocked with electric batons, deprived of sleep, and threatened.

Any practitioners that could not be “transformed” at the “transformation” sessions were transferred to the close watch division and tortured. They had to sit on a tiny and narrow stool with their body straight and were not allowed to speak from 4:30 a.m. to 9:00 p.m. The guards walked back and forth holding electric batons and shocked anyone that they did not like. Almost everyone was shocked with the electric baton. Practitioners Mr. Zhao Guoxing, Mr. Fu Hongwei, Mr. Wang Wenyuan, and Mr. Yang Baosen were tortured in the close watch division.