(Minghui.org) When Falun Gong practitioners held a signature drive in front of the Sydney Town Hall on June 28, 2014, Australians responded.

Upon learning about the persecution of this peaceful cultivation practice, especially the forced organ harvesting from living Falun Gong practitioners in China, they showed their support with their signatures, calling on the Australian government to help bring an end to this crime against humanity. 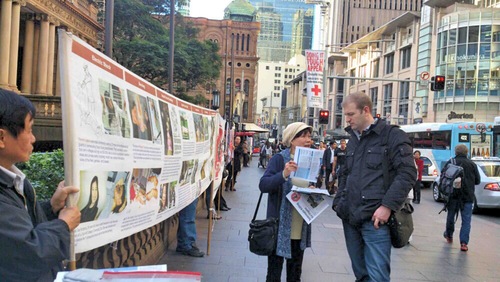 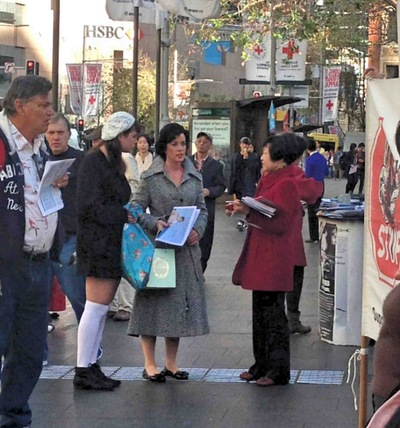 People learn about the persecution of Falun Gong from display banners and by speaking with practitioners on June 28, 2014 in front of Sydney Town Hall.

An Australian citizen signed the petition after reading about the forced organ harvesting. He hesitated initially, because he was going to visit China in the near future and he was afraid that he would be denied access by the Chinese Communist Party (CCP) because he had signed the petition. Practitioners explained to him that the petition was to be submitted to the Australian government, not the CCP. He left with the truth-clarification materials and returned shortly after, to sign his name after he did some reading.

Two Australians asked the practitioners after signing the petition, “We have seen you here [at Town Hall] for a long time. Is this signature drive a one-time occasion or an ongoing effort?”

Upon hearing that it was an ongoing effort, they said to the practitioners, “You are doing such a good job!”

One Australian who recently visited China told practitioners, “Please continue your effort. You will succeed.”

A gentleman who works at Amnesty International stopped by and read the display banners. He said he knew about the forced organ harvesting in China and offered, “If you need any help, come find me any time.”

“Practitioners Must Cooperate Well with Each Other”