(Minghui.org) Today's news from China includes incidents of persecution that took place in 7 cities or counties in 5 provinces. According to this report, 6 Falun Gong practitioners were subjected to mistreatment during their detention, and at least 10 practitioners were illegally arrested. 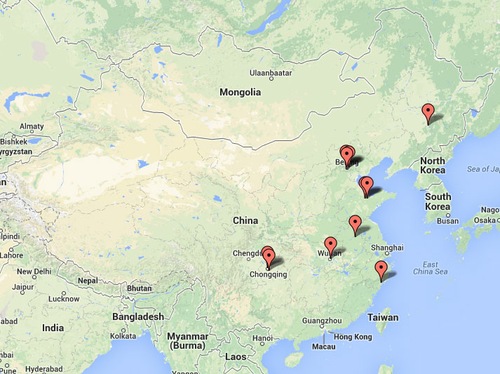 Ms. Tan Tingju, 60, lives in Wenhua Town, Liangping County. Liu Wenhe, neighborhood administration committee director, and an official named Deng Zichun, along with others broke into her home on the afternoon of June 6, 2014. They threatened her and took her Falun Gong books, a portrait of Falun Gong's founder, and an MP3 player.

Ms. Zhang Shuzhen from Lisui Village, Lisui Town of Shunyi District, was arrested recently. She is being held in the Shunyi Detention Center.

The Lucheng District Court and the 610 Office sentenced Ms. Xu Xiaohai to four years and six months in prison on June 7, 2014.

Ms. Han Xinying, Ms. Zhao Meixiu, and Ms. Li Weidong were arrested at the Tianliu Town Farm Market on June 7, 2014 for clarifying the facts about Falun Gong. The police ransacked Ms. Li's home that afternoon. The three practitioners were still being held in the Tianliu Tow Police Station on the morning of June 8, 2014.

Ms. Wang Aixiang, elderly Ms. Zheng, and another female practitioner were arrested by officers from the Daokou Town Police Station on the morning of May 28, 2014 for distributing Falun Gong informational materials at a farmer's market. It was reported that they were held in the police station before being taken to the Shouguang City Detention Center.

Mr. Gao Jie and Mr. Liu Changxiu are being held in the Qianzhugou Brainwashing Center.

Mr. Zhao Zunwei was arrested on the evening of May 22, 2014 for distributing Falun Gong informational materials. He was taken to the Qingling Detention Center on May 23, 2014.

Mr. Zhao's family went to the Qingling Detention Center on June 2, 2014 to take him home, but he had already been taken away by officers from the Liangdao Police Station. His whereabouts are unknown.

Ms. Wu Yinghua was arrested at work on the afternoon of June 4, 2014 by officers from the Bengbu City Political and Legal Affairs Committee. She was taken to the Bengbu Automobile Management Institute Brainwashing Center.

Mr. Zhang was arrested on April 26, 2011. The police ransacked his home and took a computer and Falun Gong books.

Mr. Li Huiyuan, who lives in the southern section of Tsinghua University, was arrested at home by personnel from the 610 Office in mid-May. He was taken to a brainwashing center. His whereabouts are unknown.

Ms. Ma Hongjiao, Ms. Liu Yuxian, and Ms. Dong Huimin were arrested while telling people the facts about Falun Gong on the afternoon of April 18, 2014. The police ransacked Ms. Liu's home that afternoon and took Falun Gong books and DVDs, and the Nine Commentaries on the Communist Party. That evening the police forced the three practitioners to sign certain papers. Ms. Ma was beaten. Around 11 p.m. the police took them to the Baishan Detention Center and held them there for 15 days.

Falun Gong practitioner Ms. Shai Guirong, from Huma County, Heilongjiang, was sentenced to three years imprisonment recently following her arrest in May 2013. This is the second time that she has been illegally sentenced.

Ms. Wang Xiubo was arrested after Ms. Shai, and has been homeless after she was released on bail since last May. She was listed “wanted” online. Local police are constantly harassing and monitoring her family members.