(Minghui.org) “Gongzhuling Prison is notorious for its cruelty. There are around 3000 inmates, and death is commonplace. One year, more than 80 inmates died. In winter, the dead bodies were thrown into a pit, and when enough bodies accumulated, they would be cremated together. Some bodies had ears eaten by rats; some were missing faces.”

“I've only mentioned a couple of facts here. For people who have no personal experience there, they can never imagine the severity of the persecution, no matter how I describe it. More than a dozen practitioners I know died from cruel torture, leaving behind only memories of their words, deeds and kind smiles. They are gone and I'm still alive, still witnessing such incredible human tragedy. I'm calling on people with kind hearts and consciences not to turn a blind eye to the human rights abuses and destruction of lives anymore.”

The above are excerpts from Shen Lixin's personal account of the repeated persecution he suffered under the Chinese Communist regime.

Mr. Shen Lixin previously worked as a prison guard in Sifangtuozi Prison in Jilin Province. He started practicing Falun Gong in 1995. After the regime launched the persecution of the practice in July 1999, Mr. Shen was twice illegally arrested and detained, forced to leave home, and sentenced to seven years of imprisonment.

Wife Forced to Sleep with Prison Director to Rescue Him

In January 2001, Mr. Shen was illegally arrested for clarifying the facts to people about Falun Gong and sentenced to one year in Jiutai City Forced Labor Camp, where he was subjected to intensive labor during the day and coercive brainwashing in the evening. Many Falun Gong practitioners' detention terms were illegally extended. Due to international pressure, the labor camp began to release Falun Gong practitioners in late 2001 when their terms were due, but with very strict conditions: one must obtain letters of certification from one's employer and the 610 Office, an agency specifically created to persecute Falun Gong and with the power to override all other political and judicial systems.

To secure his release from the labor camp, Mr. Shen's wife talked to relevant officials but received very little help. When she went to talk to the director of Sifangtuozi Prison where Mr. Shen used to work, the director refused to sign the letter of certification using various excuses.

Once, when no one else was in the office, he told Mr. Shen's wife that he would not sign the letter unless she slept with him. Mr. Shen's wife was thus raped under extortion. “For so many years now, I've never mentioned this to protect my wife. However, I've now decided to put it writing to expose the evil conduct of CCP officials in broad daylight!” said Mr. Shen.

Mr. Shen was released in January 2002. By then, he had lost his job and had no source of income to support his family. He went to reason with the departments concerned, but no one took notice of his case. Instead, he was constantly harassed by police and was threatened to be taken to the brainwashing center again. In order to avoid further persecution, he left home.

Mr. Shen was illegally arrested again on August 31, 2004 after the police tracked down his temporary residence. Officers also ransacked the place, taking over 1,000 yuan in cash, as well as other personal belongings, including his mobile phone and notebook computer.

Mr. Shen was taken to the police station in Changyi, Jilin City, where he was tied to a chair with his hands cuffed behind his back and with one arm over his shoulder to cause more pain. The police used a towel to immobilize his head and started to force-feed him through his nostrils with a bottle filled with chili and hot mustard. When he could not hold his breath, the spicy mixture went into his lungs. “I felt like my lungs had exploded, and the pain went straight to my head, as well. My face was covered with tears and mucus, and I coughed badly. They kept torturing me until evening, before taking me to a detention center,” revealed Mr. Shen. 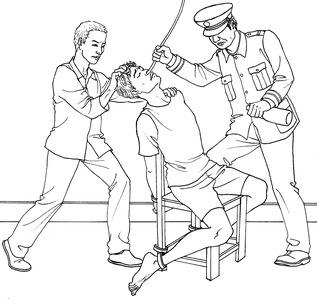 Torture illustration: Savage force-feedingMr. Shen was transferred to Lai County Detention Center the next day, and then to the local police station. He was then subjected to various forms of torture for three continuous days and nights, before being taken back to the detention center.

Shen Jun, head of the police station and the domestic security division, was the most vicious. “Sometimes he put two lit cigarettes into my nostrils and covered my mouth so that I could not breathe fresh air, causing me extreme pain and dizziness due to lack of oxygen. Sometimes he pulled out locks of my hair or kicked me hard in my legs, which turned black and blue all over. When I refused to cooperate with them, a police officer poured a cup of scalding hot tea on my head and hit me hard on the head with the lid of the teacup,” Mr. Shen Lixin went on to describe.

Mr. Shen was detained in Lai County Detention Center for seven months before he was sentenced to seven years in prison under the false charge of “obstructing law enforcement,” a commonly used accusation against Falun Gong by the Chinese communist regime. 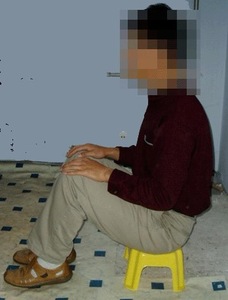 Torture re-enactment: Forced to sit on a small stool for long hours

Mr. Shen was transferred to Shilingzi Prison in Siping City in March 2005. He and other Falun Gong practitioners who had refused to give up their beliefs were forced to sit on small stools for long hours and watch videos slandering Falun Gong. Despite the innocuous-sounding name, sitting on these small stools for long periods of time often caused flesh on the victims' buttocks to fester.

Practitioners were often called to the detention office individually for coercive brainwashing and torture. Professor Wu Yifeng, an expert in bridge construction from a university in Changchun, was called to the office. When he returned, his back was covered with blisters and badly burned from electric shocks. One day, Mr. Shen was also ordered to the office and was forced to write the “five statements” (to denounce Falun Gong). When he refused, “the police stripped me naked and held me down on the floor. One of them put his foot on my head, and the rest started shocking me with electric batons, until it was time for them to go home. My whole body was covered with burn marks,” recounted Mr. Shen. 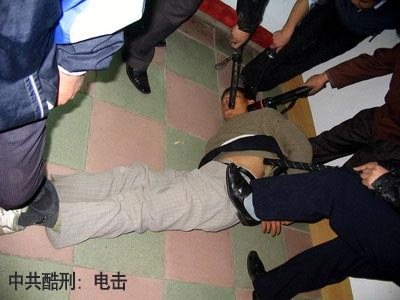 Mr. Shen was detained in Shiziling Prison for eight months before he was transferred to Tiebei Prison in Changchun and later to the notorious Gongzhuling Prison, where he was incarcerated for five years under “strict control,” a mechanism in which a prisoner is put in a small cell or solitary confinement and his or her every word and movement is monitored.

In August 2010, authorities from the Prison Management Bureau in Jilin Province ordered that all imprisoned Falun Gong practitioners must be “transformed” (turned against Falun Gong). To carry out the order, Gongzhuling Prison established a “transformation center” and intensified the persecution of steadfast practitioners. Mr. Shen was one of them.

Practitioners were often brutally beaten by guards. The guard in charge of confinement cells shocked a number of practitioners with electric batons every day. Another guard was nicknamed “Size-8 Chang” because he enjoyed beating prisoners with “size-8” thick metal wires. One day, a practitioner was dragged out and beaten for a half hour simply because he scratched an itch on his face. His vertebra was broken from the beating, permanently paralyzing him. He is still detained in the prison today.

Guard Zong Mingjun was well-known for his cruelty and viciousness. He once said, “So you call us vicious police. We're vicious all right. The Communist Party pays me, so I will beat you. Otherwise, who will pay my salary?”

Li Zhe, another guard, said, “When I beat someone, I have to keep beating him until I feel satisfied. If I don't, I'll have to beat my wife when I get home. So, it's better that I beat you!”

The torture chamber in the “transformation center” was a small windowless room on the second floor. It had a rubber floor and padded walls, in case the victim wanted to commit suicide when he could no longer bear the torture.

“I was the first to be taken to the small room after the 'transformation center' was established,” said Mr. Shen. “I was stripped naked and blindfolded. My arms were tied up, and I was pushed to the floor and shocked with electric batons. Later, they called Zong Mingjun and Li Zhe over to continue to shock me. By the time I was taken back to the cell at dusk, I could no longer walk and had to be helped back by two inmates.”

Even though Mr. Shen was put through numerous forms of torture, he did not yield to the authorities' demands to renounce his belief in Falun Gong. Nevertheless, these atrocities are still ongoing, and Mr. Shen wishes to use his personal account to bring these horrors to light and help end the persecution.