(Minghui.org) Since the Chinese Communist Party (CCP) banned Falun Gong and launched the persecution against the practice in 1999, more than 150 brainwashing centers have been set up nationwide for the sole purpose of brainwashing and “transforming” Falun Gong practitioners.

However, unyielding practitioners who refused to renounce their belief often face more than just forced brainwashing and psychological abuse. Arbitrary torture is the norm at brainwashing centers, in some cases leading to the deaths of innocent practitioners.

Among Top 10 Regions for Death Cases

Yanbian is a Korean Autonomous Prefecture in southeastern Jilin Province in northern China. It is only 16,799 square miles and has a population of 2 million people. Its capital Yanji City however, is ranked as one of the top 10 regions in China with the highest number of death cases within the brainwashing system.

Agents of the 610 Office carry out large scale arrests each year after secretly monitoring practitioners in the Yanbian region.

The practitioners are forced to undergo intense brainwashing involving constant bombardment with propaganda and pressure to renounce Falun Gong. They are each isolated in a room and monitored around the clock. All of their personal items are confiscated and they are completely cut off from the outside world, including their families. The practitioners are subjected to verbal abuse and brutal torture.

The local authorities have set up yet another brainwashing center at the Rescue Center in Shijian Village, Yilan Township, Yanji City in May 2014. More than 10 practitioners have been illegally detained in that center, without having gone through and any legal procedure. This is a serious violation of existing Chinese law. 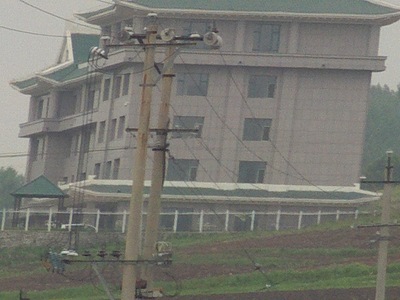 The brutality that's going on at brainwashing centers in the Yanbian region is just the tip of the iceberg.

We call for people of the international community to pay more attention, investigate, and join the effort to stop the crimes that are being committed inside these brainwashing centers.

Officials and guards use intense brainwashing and psychological abuse as a way of forcing practitioners to renounce their belief in Falun Gong. The practitioners are forced to watch CCP's propaganda programs slandering Falun Gong and its founder, including footage of the fabricated “Tiananmen Square self-immolation incident.”

To fill practitioners' every waking second with noise, the guards play audio records of chantings from other schools of practice and CCP propaganda songs.

The practitioners are forced to write daily “thought reports,” which have to be approved by officials of the brainwashing center. If not approved, the intense brainwashing continues.

Besides illegal detention, the practitioners have no freedom and visitors are forbidden.

The center collects a large sum from each of the practitioners and their employers to cover their expenses. If their families cannot come up with the money, the center may garnish their wages.

The brainwashing tactics are not only used on practitioners, but also used to deceive and intimidate people in the community.

Posters, banners, and fliers slandering Falun Gong are often seen posted or distributed in public areas in each community. All residents in the Yanbian region are required to sign a “guarantee card” that they will not practice Falun Gong. The local newspaper also plays a key role in instilling hatred toward Falun Gong among the local people.

A group of practitioners were taken by the Yanji 610 Office agents and local police from a brainwashing center to a secret place in January 2010. They were interrogated for several days and viciously beaten. Among them, Ms. Wang Shuhua was in critical condition and Mr. Zhang Xingcai's bones were broken. 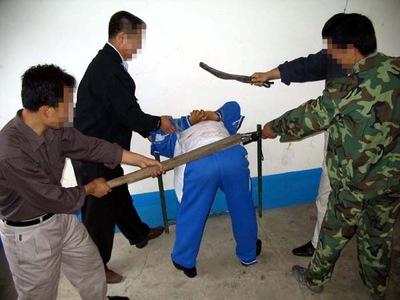 Ms. Sun Qingju, a kindergarten teacher from Bajiazi Township in Helong City, was arrested on May 5, 2012 by police officers, director Zhao Zhikui, and political commissar Wang Jiahui of the local Domestic Security Division. She was tortured at the brainwashing center located at the Xuesong Hotel until her forearm broke and her head became swollen. She was taken to a facility in Erdaobaihe Township but was refused because of her broken arm. She was then taken back to Xuesong Hotel.

Ms. Chi Suling from Shijiang Township in Tumen City was arrested by a group of police officers from the Shijian Township Police Station at around noon on May 17, 2012. She was taken to the brainwashing center set up at the Songlin Nursing Home and tortured. She developed symptoms of high blood pressure as a result.

Ms. An Yingji, a practitioner of Korean ethnicity from Yanji City, was arrested on July 1, 2012 at work. She was taken to the Yanji City Brainwashing Center by police officers from the local Domestic Security Division and staff from the 610 Office. She was forced to stand for a long time. They later handcuffed her to the window until the back of her hands were swollen. After she was finally freed from that torture, the guards forced her to sit in with her legs double-crossed. Her legs were tied together with a rope which looped around her neck and were tied to her hands that were pulled to the back for almost a day. 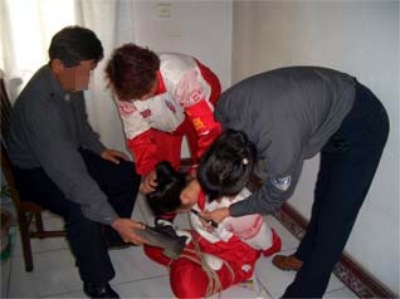 Ms. Feng Mei from Xicheng Township in Helong City was arrested while selling fruit at the market on July 22, 2012. At the Xiya Brainwashing Center, she was tortured with needles by guard Shao Ling and Wu Meihua. While she was forced to sit with the legs double-crossed, the guards tied her legs together with one end of a long strip of cloth tightly wrapped around her entire body, then they tied her raised hands over her head with the other end. Pushed to the limit, Ms. Feng jumped out of the second floor window and broke her leg and fractured her lumbar vertebrae.

Mr. Chi Huiwen, a practitioner of Korean ethnicity from Yanji City, was arrested in the evening of August 30, 2001 and his home was ransacked. While at the Yannan Police Station, he started to vomit and couldn't hold any food down. Once arrived at the Yilan Township Brainwashing Center, the guards forced him to stand for a long time and run laps in the field. He was not allowed to sleep at night and constantly forced to watch TV programs that slandered Falun Gong. They also verbally and physically abused him.

In October of the same year, the police again broke into and ransacked his home, and took him to the local brainwashing center. Since Mr. Chi went on a hunger strike to protest the illegal detention, he was not allowed to sleep and was tortured. He became so weak that he could barely walk.

Director Piao Nanzhu of the brainwashing center released him after his wife paid 100 yuan. Police officers from Yannan Police Station and officials of the Residential Committee closely monitored and often harassed him at home. Mr. Chi's health declined rapidly and he was paralyzed by March 12, 2004. He could no longer eat in the beginning of April and passed away on April 22, 2004.

Ms. Wu Yingzi, a 68-year-old practitioner of Korean ethnicity from Wangqing County, has been a target of the local CCP officials for her unyielding faith in Falun Gong. She became seriously ill with heart disease and high blood pressure when she was detained at the Wangqing Brainwashing Center. When the police released her, they threatened to arrest her again as soon as she got better. Ms. Wu left home and moved frequently to avoid being arrested. Under such pressure and mental stress, her condition worsened and she eventually passed away on July 17, 2010.

Mr. Zhang Qingjun, a 61-year-old practitioner from Shijian Township in Tumen City, was arrested on September 10, 2010 and taken to a brainwashing center. He was later transferred to the Anshan Detention Center in Tumen City and sentenced to one year of forced labor. He was taken to the notorious Yinmahe Forced Labor Camp in Jiutai City on October 22, 2010, and passed away seven days later.