(Minghui.org) Frequent arrests occurred in March and April, including seven large-scale arrests of Falun Gong practitioners in China, in weeks leading up to the Chinese Communist Party's (CCP) annual conferences, the anniversary of April 25, and the May Shanghai CICA Summit, as the nationwide persecution continues in its fifteenth year.

More than 60 reported cases involved practitioners being sentenced to prison based on falsified charges. Brainwashing centers and prisons covered up information while brutally torturing practitioners. At least 18 Falun Gong practitioners died during these two months.

Police in Shanghai escalated the persecution of Falun Gong before the Conference on Interaction and Confidence Building Measures in Asia (CICA) Summit on May 20-21, 2014. Among the 56 confirmed arrests in Shanghai year-to-date as of April 2014, 29 occurred in March and April.

On March 26, practitioner Du Zhilong was followed to his home by police, where nine practitioners who were studying Falun Gong books were arrested. Three practitioners were transferred to Fengxian Brainwashing Center after being detained for one month.

Before the Chinese Communist Party's (CCP's) annual conferences in March, official documents from the Leiyang Education Bureau of Hunan Province showed that the Leiyang and Hengyang 610 Offices issued orders to escalate operations against Falun Gong practitioners, including around-the-clock surveillance.

Several weeks prior to the anniversary of April 25, Shijiazhuang 610 Offices in Hebei Province held meetings in all levels of the public security system to organize orchestrated surveillance and arrests.

Huaihua police in Hunan Province, under the direction of the 610 Office, arrested ten Falun Gong practitioners on April 8-9. Seven are still detained.

In Liaoning Province, more then 120 Falun Gong practitioners were taken away. Among them, 31 were from the city of Shenyang.

Many practitioners under surveillance have experienced frequent arrests and torture. Some had been imprisoned for more than a decade. As long as they refuse to give up their beliefs, they face arrest at any time.

Dozens of such arrests occurred in March and April, a few of which are listed below:

An inside source disclosed that she was taken away by a joint team of officers from the Nanjing 610 Office, Nanjing Domestic Security Division, and Jiangning District Police Station.

Cheng worked as a manager at the Jiangsu Medicine & Health Products Import-Export Corporation. She also managed the textile division of a materials firm in Jiangsu. Cheng was sentenced to prison for ten years in 2002, for practicing Falun Gong. She has been under surveillance since her release in 2010.

Meng Fanquan, a lecturer at Hebei Polytechnic University, was arrested on March 13. He had been arrested and imprisoned multiple times during the communist regime's fifteen-year-long persecution of Falun Gong. In total, Meng had been imprisoned for over ten years.

Shi Chunde, of Huludao, Liaoning Province, was monitored, followed, and intimidated by local Communist Party officials for several days after April 24. Under the pressure, his wife became sick and had to be hospitalized.

Mr. Shi said, “Such surveillance has been happening for fifteen years. My 80-year-old mother is terrified of seeing police or strangers. Facing the frequent arrests of her son and grandson, she cried and prayed many times. She suffered a lot mentally. She once fell down and became paralyzed for more than five years. She passed away last year.”

3. Beatings and Robbery by Police

One officer beat Zhu's chin and arms. Officer Gao Jun sat on Zhu's younger sister, handcuffed her, and tried to suffocate her with a quilt. The violence lasted more than three hours, according to Zhu's neighbors.

The officers arrested Zhu, who was then beaten and kicked at the police station, before being transferred to Changchun No. 3 Detention Center that night. Following the assault, Zhu reported being unable to walk, having chest pain, and spitting blood.

Officer Wang wanted to record videos and take photos in the home, and search for Falun Gong books. When Wu refused, the officers beat Wu's wife and his mother, who received injuries in the head, face, and other parts of her body.

In addition to swollen eyes and cheekbones, Wu's mother experienced pain in her back and waist as a result of the beating and became unable to walk normally.

In Hubei Province, practitioner Chen Song managed a production line at the Far East Chemical Corporation. More than 20 officers from the Huanggang Domestic Security Division arrested Chen at his workplace, and seized more than 13,000 yuan (~$2090 USD) worth of his personal belongings.

In front of company employees, one 610 Office official pointed at Chen's personal items and told the police officers, “You've worked hard. You can take these things. We [the 610 Office] are only interested in the computers and documents.” Chen Song was detained in a brainwashing facility, officially known as the Hubei Legal Education Center. Chen's mother went to the facility wearing a shirt written with the words “Release my son Chen Song,” but received no response.

In order to fabricate evidence, Officer Hu Jun and others interrogated practitioner Du Shuhui using torture instruments, including the iron chair, to extract a “confession.”

When Du exhibited symptoms of epilepsy, gallbladder inflammation, and gallstones, a doctor determined that hospitalization and surgery was necessary. Nevertheless, the police did not release her on medical parole. The police colluded with the local Procuratorate and Hanzhong Court to hold an unannounced hearing on April 9.

That same day, Deputy Political Commissar Li Jiannong of the Xingtai City Police Station, along with Domestic Security Captain Liu Dongbo, led a group of officers to interrogate Hao, who was beaten and shocked using electric batons. Police cuffed her hands and feet to an iron chair torture device for two days.

She was transferred to the Shahe Criminal Police Brigade and again shocked with electric batons. Hao was detained in Xingtai No. 1 Detention Center after the torture.

Falun Gong practitioner Zuo Kangwei of Huai'an, Jiangsu Province was arrested and detained in the Huai'an Brainwashing Center on March 17, where police officers shocked him with high-voltage electric batons. He was beaten by criminal inmates and forced to do hard labor for long hours.

Practitioners Shi Mengchang, Han Shujuan, Jiang Xinbo, and others were detained in the brainwashing facility officially known as “Qinglongshan Jiangsanjiang Legal Education Base.”

The practitioners' families hired lawyers to secure their release, but Jiangsanjiang police detained and beat four of the lawyers, including Tang Jitian, Jiang Tianyong, Wang Cheng, and Zhang Junjie. As a result, each suffered between three and ten fractured ribs. Three other lawyers and dozens of citizens who attempted to rescue them were also arrested.

After widespread protest from lawyers and attention from international media, the four lawyers were released, and the brainwashing center was shut down. However, six of the seven Falun Gong practitioners who were detained there were transferred and detained in other locations. Practitioner Wu Dongsheng, in critical condition at the time, was released to family members.

Practitioner Bian Lichao was imprisoned in the Shijiazhuang No. 4 Prison in Hebei Province. During a police interrogation in 2012, he was tortured until his condition became critical, before being sentenced to twelve years in prison. He was initially sent to Baoding Prison, where his family was denied all visitation requests.

On March 12, when his daughter held a banner that read “I want to see my father” in front of the prison, the Shijiazhuang police detained her and her friends on the spot. Soon afterwards, Bian's wife was detained by police in Tangshan.

Ms. Chen Yinghua, who accompanied Bian's daughter when she tried to visit her father, was also detained at the Shijiazhuang Detention Center. Ms. Chen has held a hunger strike for more than a month to protest her unlawful detention but still has not been released.

Practitioner Zhao Weidong of Taian, Shandong Province was formerly an assistant engineer at the Xinhua Machine Plant. In September 2004, he was unlawfully sentenced to 12 years in Shandong No. 1 Prison, where he has been tortured for nearly ten years. The prison has denied all visitation requests from his family.

Among the eighteen Falun Gong practitioners whose deaths from the persecution were verified during March and April, nine deaths resulted from torture in prisons. Practitioner Ge Peijun of Miyun, Beijing, and Yang Chunling of Dalian, Liaoning Province were tortured to critical condition in prison and released shortly before they passed away. Practitioner Han Haiming of Wenshui County, Shanxi Province died of a brain hemorrhage after being tortured by prison guards.

Appendix: 18 Falun Gong practitioners who died while being persecuted in March and April 2014 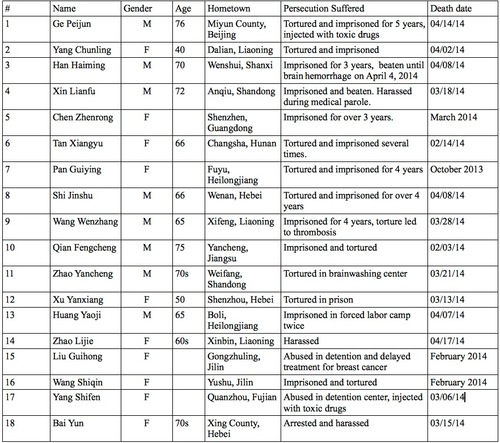 “Eliminate the Mentality of Showing Off”