Visitor to Event in Sydney: “I Want to Keep a Record of These Facts”

(Minghui.org) Australian practitioners held a materials display event on Saturday, June 14, 2014, in Eastwood, a suburb of Sydney, to inform people about the ongoing persecution of Falun Gong in China, and the organ harvesting from living practitioners. Many people were surprised by the brutality, and some Chinese decided to quit the Chinese Communist Party (CCP) and its affiliated organizations.

The streets were crowded around noon on June 14, 2014, and many people stopped to learn about the issues and read the banners and posters, which were hand-held by practitioners. 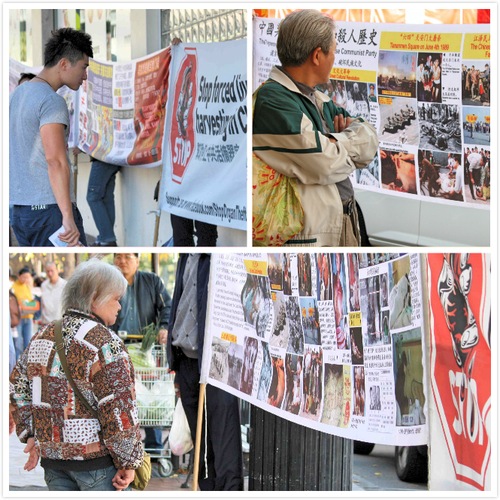 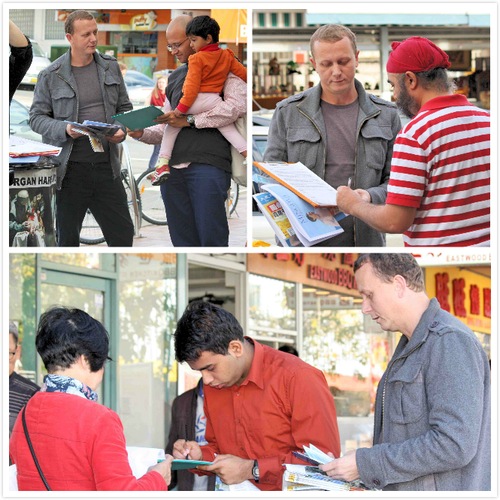 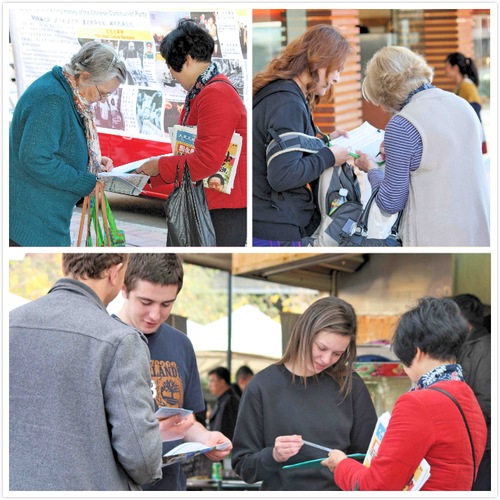 One lady in her thirties with two children stopped by and said to a practitioner, “I knew the CCP was bad, but I didn't realize it was so horrible.” She then took photos of each poster. When one of her children asked what she was doing, the lady said, “It's hard to believe, but all these things really happened. I want to keep a record of these facts.”

After practitioner Hannah explained to a gentleman about the ongoing persecution in China, he agreed with her, and said, “It is chaotic in China right now. Although the economy in China may seem to be booming, there are hardly any human rights or freedom of speech.” He also indicated that because many Western countries have been doing business with China, very few people are willing to step forward to support righteousness.

Eastwood has one of the largest Chinese communities, and many attended the event. When practitioner Ahfen chatted with one Chinese lady, she shared about how her health improved through practicing Falun Gong. “I used to have many diseases and the arthritis was especially painful. I was a doctor myself, but I didn't know what to do.” After she began practicing Falun Gong more than ten years ago, the illnesses disappeared and never recurred.

The Chinese lady, also a doctor, believed what Ahfen told her, “China is a special place.” When Ahfen recommended that she quit the CCP for a safe future, she gladly agreed.

Another practitioner volunteer, Yuan Yuan, talked with many Chinese during the event. He said, “One group of more than ten people, all came here to market real estate. They are young and highly educated. After I told them about the brutal persecution in China, they understood what had happened.” Upon hearing the bad deeds committed by the CCP, they all decided to quit the Party and its affiliated organizations.

“I am really happy for them,” Yuan Yuan said, “By renouncing the CCP and its vicious deeds such as live organ harvesting, these people will have a better future.”

“Behind the Peaceful Scene: Participants at a Falun Gong Practice Site in Taipei Share Their Stories”

“The Art of Zhen, Shan, Ren International Exhibition: “Can I Quit the CCP Here?””