(Minghui.org) The recent 2014 Joint International Congress on organ transplant in London offered a rare opportunity for medical professionals and Falun Gong practitioners to touch base on the issue of forced organ harvesting in China.

The facts of the nationwide persecution of Falun Gong in China and overall organ harvesting information helped experts in the field of organ transplantation connect bits and pieces of their empirical experience and recognize that forced organ harvesting in China is a state-sanctioned, systematic crime.

During the four-day conference that ended on June 7, many attendees expressed their concern that forced organ harvesting in China has challenged the bottom line of humanity, conscience and medical ethics. There was an expressed consensus that global attention and collective efforts are a must to end the crimes.

The conference was a joint meeting of the International Liver Transplantation Society (ILTS), the European Liver and Intestine Transplant Association (ELITA), and the Liver Intensive Care Group of Europe (LICAGE). 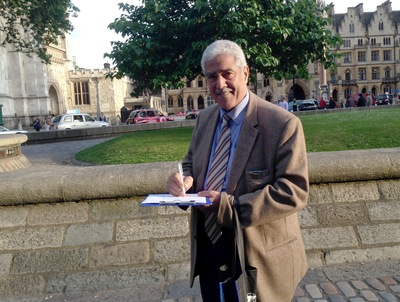 Dr. Marwan revealed that a committee from the International Liver Transplant Society went to China over 15 years ago and met with the Chinese doctors responsible for using organs of death row prisoners.

Dr. Marwan shared what he knew about the use of organs of executed death row prisoners in China. “I think at that time, they have an agreement with them [Chinese doctors] that they do it for the Chinese and not the international [community]. But unfortunately many people go from their countries to a country close to China and enter China to do it. This is a sideway or bad door, but the problem is that it's [inhuman].”

However, upon learning about another group of non-consenting prisoners, Falun Gong practitioners, becoming a target and source of this unethical commercial behavior, Dr. Marwan signed the 2014 DAFOH petition because it is clear that now, people are killed on demand for their organs.

The updated DAFOH (Doctors against Forced Organ Harvesting) petition builds on the momentum of a successful 2013 campaign, which resulted in 1.5 million signatures globally. The petition continues to urge the United Nations High Commissioner for Human Rights to call upon China to end these crimes against humanity and initiate further investigation.

A Canadian doctor from Ottawa shared that he had attended in person the presentation of David Kilgour, former Canadian diplomat and crown prosecutor. In the presentation, Mr. Kilgour spoke about his independent investigation that concluded the existence of state-sanctioned organ harvesting from living Falun Gong practitioners.

The Canadian doctor mentioned that a Chinese doctor attendee had done over 1,000 liver transplants, which was a “crazy” [extremely high] number. There were only 300 to 400 liver organ transplants per year in the entire country of Canada, for the mere reason that matched organs are hard to find. He specializes in liver transplant and has heard from other doctors that their patients go to China for “organ transplant tourism” because Chinese hospitals guarantee a matched organ within two weeks. No post-surgery follow-up checks or monitoring is provided by Chinese hospitals.

Egyptian Doctor: It's Shameful and Must End 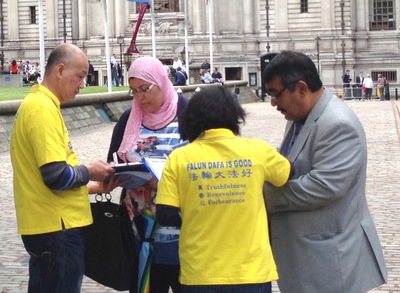 Dr. Alaa Osman from the University of Egypt and his daughter Sarah, also a medical professional, signed the 2014 DAFOH petition to the UN on June 7.

“It's shameful!” Dr. Alaa Osman remarked as he signed the DAFOH petition, “So we sign this.”

Upon learning that organ harvesting is a state-sanctioned and systematic crime in China, Dr. Osman connected it with the story of his relative, a high-ranking police officer in Egypt. The relative needed a liver transplant and paid $100,000 to have one in China about four years ago. “It's a money maker... How can they do this?

“There must be a law. There must be a committee, not only from physicians, but from the general public. This is very important to correct this murder and crime done in China,” Dr. Osman stated.

German Doctor: “Catastrophic and Against Humanity” 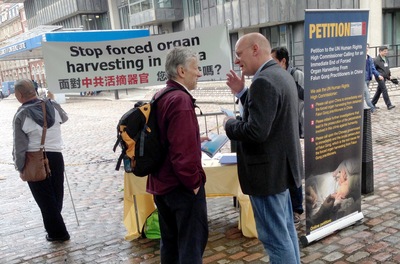 Dr. Nicolus Richter (right) from Germany speaking to a Falun Gong practitioner to learn more about organ harvesting in China.

Dr. Nicolus Richter, a German surgeon specializing in liver and kidney transplants, heard about forced organ harvesting in China over five years ago.

He shared his personal experience of it from a few years back: “We discussed in our department when we had guests from China who wanted to learn liver transplantation at our center in Germany. We discussed it and decided not to cooperate with that.”

Dr. Richter's department wrote back to the Chinese doctors, refused to train them in liver transplants, and cited the ongoing forced organ harvesting in China. “It is catastrophic and against humanity!

“I think as Germans, we also have a very strong history in those catastrophes. Nowadays, we have very strong responsibility, moral duty, to look in the world where such things are happening and raise our voice...,” added Dr. Richter.

Liver Transplant Doctor from Saudi Arabia: It Affects Us 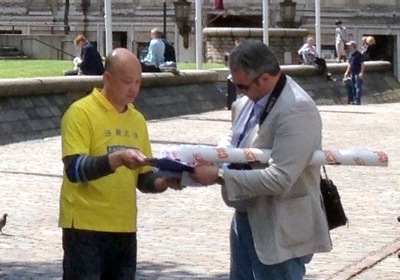 A liver transplant doctor from Saudi Arabia signed the DAFOH petition on June 7.

A Saudi Arabian doctor specializing in liver transplants signed the DAFOH petition on June 7, the last day of the conference. He said that he had learned about forced organ harvesting from Falun Gong practitioners last year in Austria, during a global conference on organ transplants. He hoped that his signature would help end this crime against humanity soon.

“We know about this. We even did a publication in the American Transplant Journal about this, what we call 'organ transplant tourism.' These patients come for follow up care in our hospital. We had a concern about this.” The Saudi doctor said that he had seen such patients in the last three years.

“Podcast (Health): “The Recovery of a Melanoma Patient””

““I Recite the Fa Every Day; Why Has My Problem Still Not Been Resolved?””