It also had a message in Chinese specifically to those from China: “In the face of the Chinese Communist Party's live organ harvesting, how can you remain silent?”

The banner's sheer presence focused attention on one of the most important human rights and medical ethics issues in modern history: state-sanctioned forced organ harvesting from non-consenting prisoners of conscience in China, mainly Falun Gong practitioners.

Falun Gong practitioners informed conference attendees and passersby about the organ harvesting crimes taking place in China outside of the Centre beginning June 4, the opening day of the meetings.

During the four-day meeting, about 300 conference participants signed the updated DAFOH (Doctors against Forced Organ Harvesting) petition to the United Nations. Many more of these medical professionals learned the facts, connected with information they had already been exposed to, and increased their awareness of the issue.

The conference venue, Queen Elizabeth II Conference Centre, is located near two London landmarks: Big Ben and Westminster Abbey. Groups of Chinese tourists also took pictures of the banner and shared the information with their friends in China. 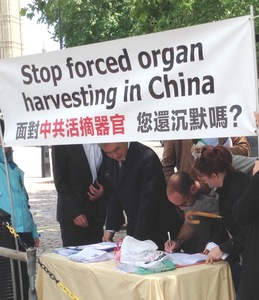 “In the face of Chinese Communist Party's live organ harvesting, how can you remain silent?” (Chinese text on the banner) The banner speaks to English and Chinese-speaking attendees of the 2014 Joint Congress on Organ Transplants outside of the Queen Elizabeth II Conference Centre June 4 through 7, 2014. 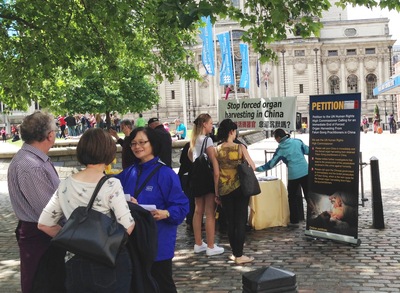 Some conference attendees were shocked to hear about the live organ harvesting, especially in contrast to the peaceful exercises being done in front of them. One Italian representative signed the petition without hesitation. When he heard that the persecution had been going on for 15 years, he said, “No, this brutality must stop.” 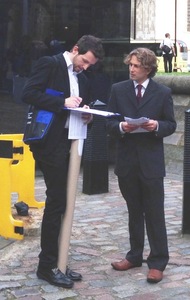 An Italian participant at the conference signs the DAFOH UN petition.

Many medical professionals have heard about the criminal practice in one way or another.

Dr. Nicolus Richter, a German surgeon specializing in liver and kidney transplants, heard about organ harvesting in China over five years ago.

He shared his personal experience of it from a few years back: “We discussed in our department when we had guests from China who wanted to learn liver transplantation at our center in Germany. We discussed it and decided not to cooperate with that.”

Dr. Richter's department wrote back to the Chinese doctors, refused to train them in liver transplants, and cited the ongoing forced organ harvesting in China. “It is catastrophic and against humanity!” 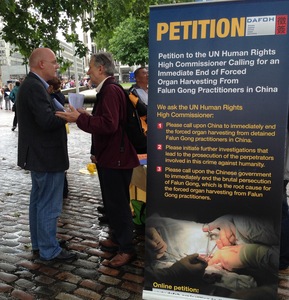 Dr. Nicolus Richter (left) from Germany speaking to a Falun Gong practitioner to learn more about organ harvesting in China

After reading the open letter “Surgeons from China Have Questions to Answer on Organ Harvesting,” a Canadian medical professional said to a practitioner, “I have heard about this before. This [the atrocity] is unacceptable.”

He continued, “My question is, with so much evidence, how can the Chinese regime ignore the allegation?”

Renee Verhoeven, an medical student from Rotterdam in the Netherlands, did not know about the forced live organ harvesting. As she signed the petition, she said, “I will let more people know about this through social media.” She thanked practitioners for letting her know about this important issue and said she would support efforts to end it. 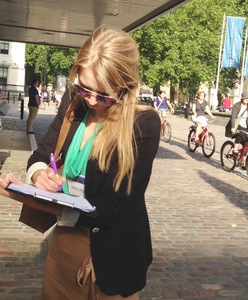 Renee Verhoeven, a medical student from the Netherlands, said she would tell people about the atrocity through social media. 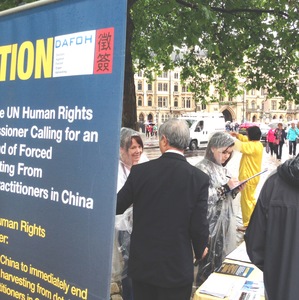 A girl and her mother sign the DAFOH petition. 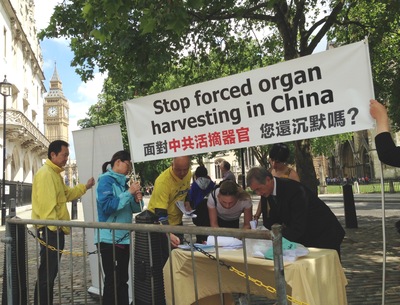 Many people were shocked to hear about forced live organ harvesting and commented: “That is horrible.” “It is absolutely unacceptable.” “It is against humanity.” “How can such a peaceful meditation be treated like that?” “This brutality has to stop.”

One Polish couple had heard about the persecution in the past, but they did not know what Falun Gong was. Practitioner Mei briefly explained the facts about Falun Gong and why the Communist Party banned it. When she told them about the principles of Truthfulness-Compassion-Forbearance, they said, “I see, this is different from the theory of struggle in communism.” They thanked Mei for letting them know about such a good self-improvement system and expressed interest in learning more about it. 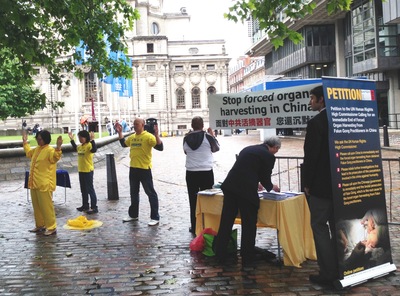 Practitioners set up a table to inform people about forced organ harvesting from Falun Gong practitioners.

“Clarifying the Truth to Neighborhood Committee Director and Secretary”