(Minghui.org) Falun Gong practitioners were invited to participate in the annual West End Festival on June 1, 2014. It is a large cultural event in Glasgow, which is the largest city in Scotland. Practitioners introduced Falun Gong, which is a traditional cultivation practice that originated in China and is based on the principles of Truthfulness-Compassion-Forbearance. 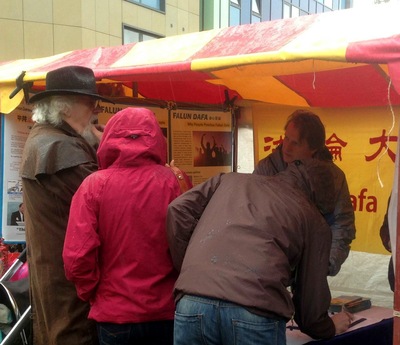 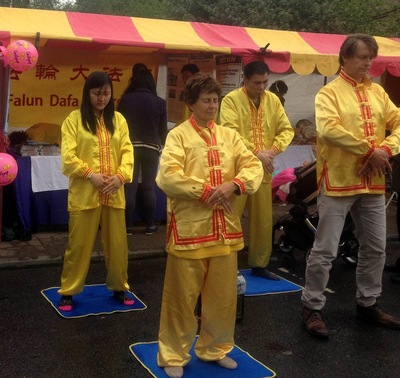 Practitioners set up their display and booth in the early morning of June 1, the first day of the festival. Some practitioners demonstrated the exercises, and some collected signatures calling for an end to the persecution of Falun Gong in China. The Falun Gong booth received special attention throughout the event.

Despite the rain, many people watched the exercise demonstrations with great enthusiasm. They were fascinated by this beautiful cultivation practice that originated from the East and spread around the world. They listened to practitioners' recount of the persecution by the Chinese Communist Party (CCP), and were shocked by the CCP's forceful organ harvesting from living Falun Gong practitioners. People signed their names calling to stop the atrocities of the CCP.

Some Chinese students stopped by the information booth out of curiosity. They had been influenced by the CCP's slandering propaganda and questioned Falun Gong practitioners. Practitioners patiently explained to them the true story and facts about Falun Gong. After hearing the irrefutable evidence of the CCP's persecution, the students finally saw the nature of the CCP and decided to quit the Communist Youth League and Young Pioneers (affiliates of the CCP)

An organizer of the festival visited the booth and said it was important to tell more people about the persecution by the CCP. She liked the Falun Gong exercises and invited practitioners to come back again next year.