(Minghui.org) Bloody Harvest, the book which exposed the Chinese Communist Party's (CCP) organ harvesting from living Falun Gong practitioners, has been translated into Japanese and published. Mr. David Matas, one of the authors, was invited to speak on June 2, 2014, at a symposium held to celebrate the publishing of the Japanese edition. 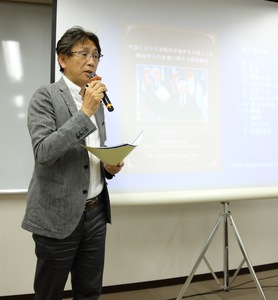 The international community is becoming increasingly aware of the CCP's live organ harvesting. One of the symposium organizers, human rights lawyer Mr. Shinichi Tokunaga, who participated in the lawsuit against former Chinese Chairman Jiang Zemin in Japan, spoke about how to let more Japanese people know about the CCP's organ harvesting.

After the speeches, attendees watched the award winning documentary, “Free China: The Courage to Believe.” Many were deeply moved. Human rights advocate Ms. Chuso said that people can't tolerate a government's disrespect of life in pursuit of profit, and that she would use her network to spread the truth.

“A Travesty of Justice: The Sham Trial of Mr. Zhao Tianrong in Guandong Province”

“A Centenarian and Her Daughter Have Their Health Restored”