(Minghui.org) Mr. Li Zhe, a Canadian citizen, called for his father's release in front of the Chinese Consulate in Toronto on May 6, 2014. Mr. Li and his father Li Xiaobo were arrested on April 12 while distributing Falun Gong truth-clarification materials to villagers near Chengdu City, Sichuan Province. Mr. Li Zhe was deported to Canada on April 18. His father is still detained at the Longquanyi Detention Center in Chengdu. 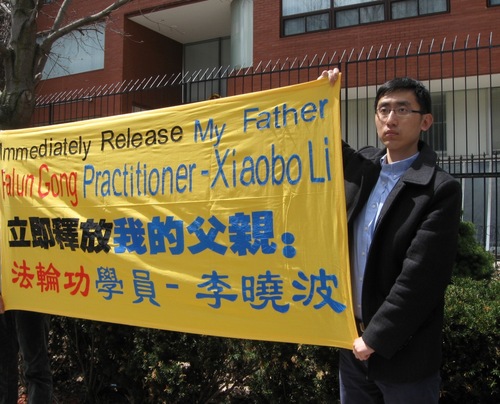 Mr. Li Zhe called for his father Li Xiaobo's release at a press conference on May 6, 2014 in front of the Chinese consulate in Toronto, Canada.

Previously Suffered Eight Years in Prison for His Belief

Mr. Li Xiaobo, 58, was just released in 2012 after suffering eight years of abuse in the Deyang Prison in Sichuan Province. Mr. Li Zhe has been visiting Mr. Li Xiaobo intermittently during the eight years and was inspired by his father's steadfast faith. Eventually he started practicing Falun Gong as well in 2013.

After his release, Mr. Li Xiaobo wrote several articles to expose the torture he endured. He says group beatings from inmates and guards were common. Regardless of the time or location, as long as the guards considered practitioners “unsubmissive,” inmates would be incited to beat them. Sometimes practitioners were pushed into restrooms or behind a closed door for a beating. Sometimes they were suddenly attacked, out of the blue, by a group of inmates or guards. Guards and inmates discussed with each other their strategies, such as targeting the throat, stomach and abdomen, so the practitioners couldn't scream or make any sound.

Guards and inmates sometimes forced the practitioners to lick their own blood off the wall after a beating.

“My Father Led by Example”

Mr. Li Xiaobo started practicing Falun Gong in 1996. Prior to that, he had been the county executive for Pujiang County and the deputy party secretary of Renshou County. He quit his government job in the early 1990s because he saw too much corruption in the Chinese Communist Party. He became a general manager at a real estate company.

Mr. Li Zhe said, “My father became approachable after practicing Falun Gong. He also became much healthier and quit smoking. He was a fair general manager and led by example. He walked half an hour to the company every day and didn't use the company's chauffeur except for urgent business matters. He was widely respected by the employees of the company. People who worked with him closely told me: 'Your father is one of the most noble men we have ever met.'”

Grassroots Efforts to Stop the Persecution

In addition to calling for his father's release, Mr. Li Zhe volunteers his spare time to work on projects to raise awareness about Falun Gong and the persecution in China.

Mr. Cui, spokesperson for the Falun Dafa Association of Mississauga, Canada, says that the 15-year-long brutal persecution of Falun Gong has been kept secret in China by the Communist regime. Therefore, a lot of Chinese are unaware of the severity of the persecution and most of what they heard about the practice of Falun Gong has been the regime's vicious propaganda.

While calling for public support for the rescue of Mr. Li Xiaobo, Mr. Cui said, “Without external financial support, Falun Gong practitioners in China risk their personal safety, pay for the truth-clarification materials out of their own pocket, and persevere in clarifying the facts of the persecution. They say 'no' to the persecution, not just for themselves, but also for the entire Chinese population.”

“Persist in Clarifying the Truth During Tribulations”