(Minghui.org) As World Falun Dafa Day draws near, Falun Dafa practitioners and their families in the Greater Los Angeles Area in California gathered at Santa Monica Pier on May 4, 2014, to celebrate this special occasion with a large group exercise activity and cultural performances.

May 13, World Falun Dafa Day, is the 22 nd anniversary of Falun Dafa's public introduction and the birthday of Mr. Li Hongzhi, the founder of Falun Dafa (also known as Falun Gong). Practitioners sang “Ode to Master's Grace” to express their deep respect and gratitude to their revered Master, who made the teachings of Truthfulness-Compassion-Forbearance available to them to improve the wellbeing of their minds and bodies.

Practitioners in Los Angeles have a group photo taken to express their gratitude to Master Li. 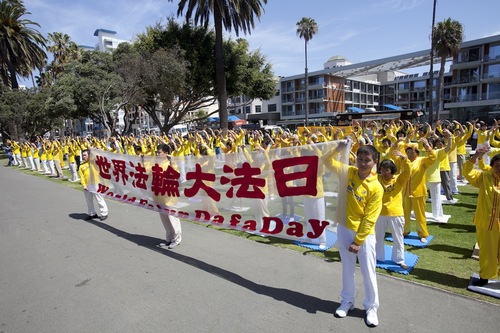 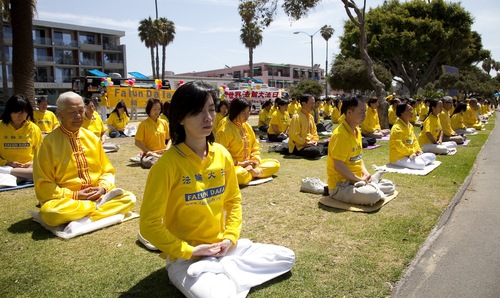 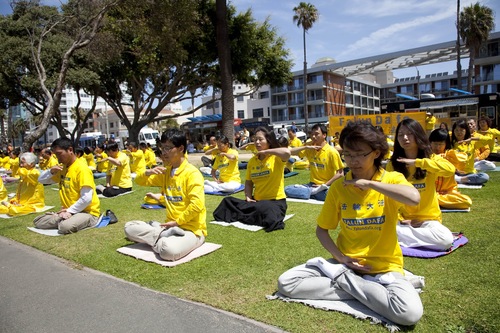 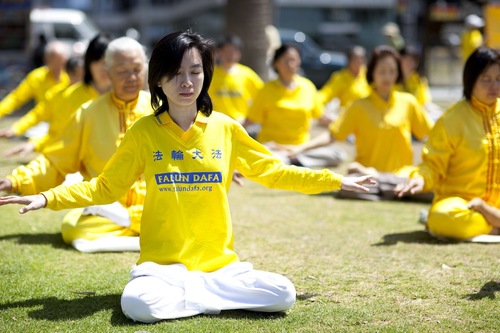 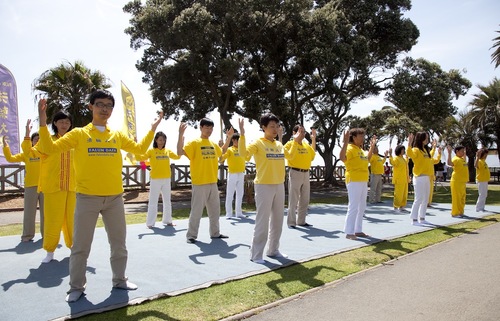 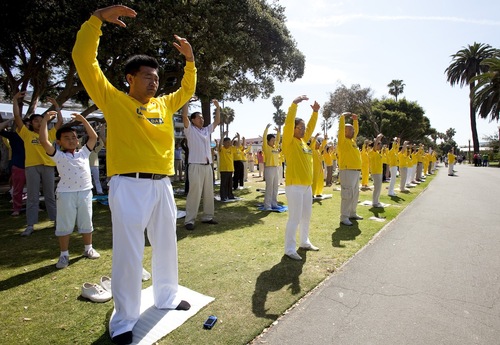 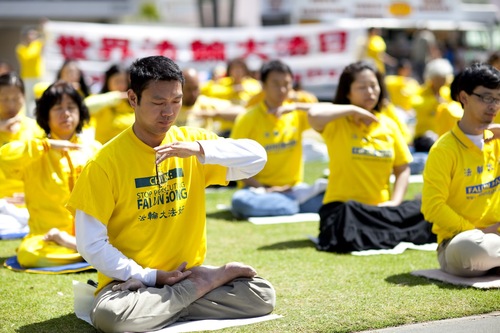 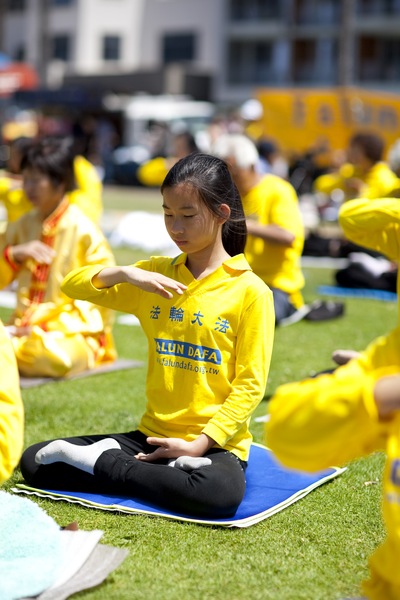 Hollywood resident Jeremiah, who has been drawn to Eastern culture since childhood, was on his way to a martial arts course at the pier when he saw and heard the Falun Gong exercise demonstration and felt a peaceful energy coming from the practitioners.

Practitioners presented a variety of performances for the crowd after doing the exercises together as a group. Several shared their thoughts and understandings of the special day.

Mr. Zhang Jin from Anhui Province, China, endured eight years of persecution in a prison in China for remaining steadfast in his belief before he came to the United States last year. The May 4 event was his first opportunity to take part in a World Falun Dafa Day celebration outside of China. He began practicing in 1993.

Mr. Zhang recalled when he was in China in 2000, and he and fellow practitioners were very excited to see online photos of overseas celebrations of the first World Falun Dafa Day: “Amidst the brutal persecution, practitioners were encouraged when they saw that we had our own holiday and that practitioners outside of China joyously celebrate it.”

Today, as Mr. Zhang celebrates this special occasion in the U.S. on a sunny weekend, he hopes that practitioners in China will enjoy such freedom in the near future.

“In such a festive atmosphere, practitioners dance and sing to express how happy they are to have attained the Fa and to extend their respect to Master. I'm looking forward to seeing the immediate end of the persecution, so that practitioners in China can openly celebrate our holiday the same as practitioners in the United States,” he said.

Raising Awareness of the Persecution Is Duty-bound

Dr. Donald Churchill, who has participated in World Falun Dafa Day celebrations for 10 years, felt fortunate to be part of the activity. He said that every time he thinks of his experience of obtaining the Fa, he has a sense that he is being divinely taken care of.

He was keenly aware of the responsibility he shouldered. He said that, while celebrating this special occasion, practitioners take the opportunity to help people learn about Falun Dafa and raise awareness about the ongoing persecution in China, particularly the Chinese regime's crime of harvesting organs from living Falun Gong practitioners.